A peer-reviewed paper published today in the journal Climate of the Past finds that sea surface temperatures in the Mediterranean began to steadily rise 500 years ago after the nadir of the Little Ice Age (LIA), well before change in "greenhouse gases" from the industrial revolution. Adding to the hundreds of other papers from locations around the globe, the paper also finds a Medieval Warming Period and an even hotter Roman Warming Period. 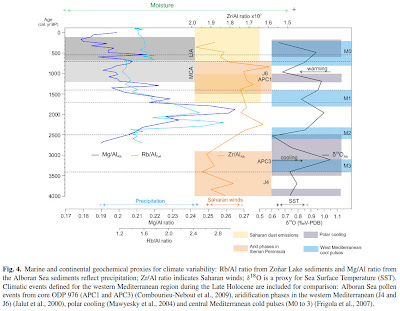 Abstract. A combination of marine (Alboran Sea cores, ODP 976 and TTR 300 G) and terrestrial (Zoñar Lake, Andalucia, Spain) geochemical proxies provides a high-resolution reconstruction of climate variability and human influence in the southwestern Mediterranean region for the last 4000 years at inter-centennial resolution. Proxies respond to changes in precipitation rather than temperature alone. Our combined terrestrial and marine archive documents a succession of dry and wet periods coherent with the North Atlantic climate signal. A dry period occurred prior to 2.7 cal ka BP – synchronously to the global aridity crisis of the third-millennium BC – and during the Medieval Climate Anomaly [the Medievel Warming Period] (1.4–0.7 cal ka BP). Wetter conditions prevailed from 2.7 to 1.4 cal ka BP. Hydrological signatures during the Little Ice Age are highly variable but consistent with more humidity than the Medieval Climate Anomaly. Additionally, Pb anomalies in sediments at the end of the Bronze Age suggest anthropogenic pollution earlier than the Roman Empire development in the Iberian Peninsula. The Late Holocene climate evolution of the in the study area confirms the see-saw pattern between the eastern and western Mediterranean regions and the higher influence of the North Atlantic dynamics in the western Mediterranean.
Posted by MS at 9:35 AM