Although solar cycle 24 began almost 3 years ago (officially on January 4, 2008), the sun continues to be unusually quiet at this point in the solar cycle with predictions of maximal sunspot activity repeatedly adjusted downward. A key indicator of solar magnetic activity, the Ap Index (average planetary magnetic index) has reached the lowest absolute values, lowest 5 year moving average values, and by far the highest number of continuous months ≤ 10 since record keeping by NOAA began in 1932: 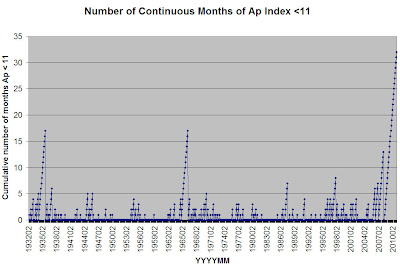 In prior solar cycles, the Ap Index has been noted to lag the beginning of the sunspot cycle by up to one year. Solar cycle 24 continues to exhibit unique behavior compared to the 7 previous solar cycles recorded by modern instrumentation and offers more evidence the sun is undergoing a significant state change. Global temperature changes typically lag reduced solar activity due to moderating effects of heat storage in the oceans. Solar state changes in the past such as the Sporer, Maunder, and Dalton minima coincide with the colder periods of the Little Ice Age, which lasted from about 1300 to 1850. The HADCRU global thermometer record coincidentally began in 1850 and shows a mere 0.7C recovery from the frigid temperatures at the end of the Little Ice Age in 1850.
Posted by MS at 6:14 PM