Paper finds another amplification mechanism by which the Sun controls climate

A lecture by professor Hiroko Miyahara of the University of Tokyo provides additional support to the Svensmark theory of cosmoclimatology, finding that both solar geomagnetic activity and the polarity of geomagnetic activity have significant effects upon cosmic rays and cloud formation. The polarity of solar geomagnetic activity flips with a 22-year cycle, with periods of negative polarity [such as the current solar cycle] having a greater effect upon cosmic rays and cloud formation. The authors also find a remarkable correlation between solar rotational signals, cloud height, and the Madden-Julian Oscillation [third figure below], which may represent yet another mechanism by which small changes in solar activity can be amplified to large changes in climate. Other amplification mechanisms include via ocean oscillations, ozone, and sunshine hours/clouds.

Solar Activity and Climate - Hiroko Miyahara, The University of Tokyo from Kavli Frontiers of Science on Vimeo. 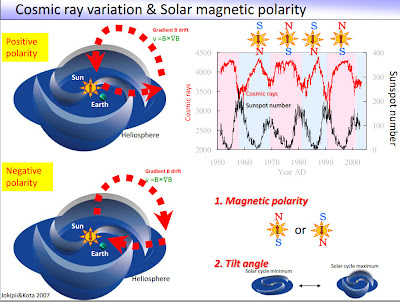 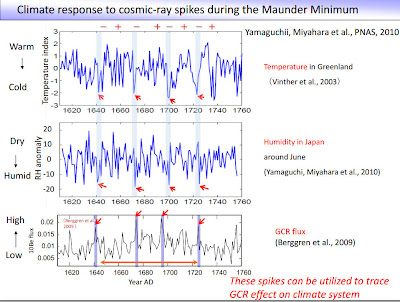 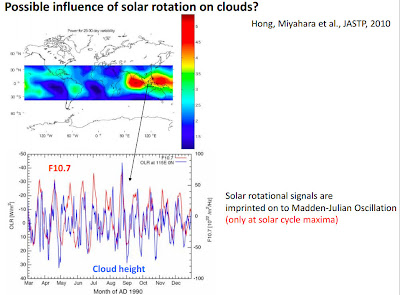 Hiroko Miyahara, The University of Tokyo
Abstract:
1. Introduction
Instrumentally measured or reconstructed past climate changes often show positive correlation with solar activity at the wide range of time scales, such as from monthly (Takahashi et al., 2010) to millennial (Bond et al., 2001). However, the mechanisms of their linkage have not been well understood. The possible solar-related parameters that can drive climate change are; total solar irradiance (TSI), solar ultra violet (UV), solar wind (SW) and the galactic cosmic rays (GCRs). The galactic cosmic rays are attenuated by changing solar magnetic field in the heliosphere; the region where the wind of solar plasma and magnetic filed expend. The observed flux of GCRs shows inverse correlation to solar activity. It is known that the change in the cosmic ray flux results in the change in the ionization rate in the atmosphere. It is suggested that it may cause the change in cloud amount.
2. Variation of Galactic Cosmic Rays during the Maunder Minimum
It is difficult to evaluate the exact role of each of solar-related parameters above, since most of them are more or less synchronized for the instrumental period. However, the variation of solar radiation and GCRs may be different at the Maunder Minimum (AD1645-1715). The Maunder Minimum is a period of sunspot absence lasted about 70 years. The Sun has shown periodic variation with ~11-year period since the beginning of the 18th century. However, the sunspots had almost disappeared and apparent ~11-year cycles had been lost during the Maunder Minimum. It means that solar activity had been extraordinarily weak and that the environment of heliosphere had been different from today. We found that the variation of GCRs was very unique during the time. The variation of GCRs has been revealed by the measurements of cosmic-ray induced radio isotopes such as carbon-14 and beryllium-10 in tree rings or ice cores. The content of radio isotopes have shown that solar cycle had been kept during the long-lasting sunspot absence, but with ~14-year period. It has been also revealed that the 22-year cycle; the cycle of periodic reversal of solar dipole magnetic field, had been also kept but with ~28-year period and had been amplified during the time. The polarity of the Sun reverses at the maxima of solar cycles, and thus holds ~22-year period. The ~22-year cycle is not observed in the changes in solar radiations; however it appears in the variation of GCRs consisting of mainly changed particles. The changes in the environment of heliosphere had probably resulted in the amplification of the 22-year cycle in GCRs.
3. Variation of climate and its relation to Galactic Cosmic Rays
We have found that reconstructed climate data show unique variations similar to that of GCRs during the Maunder Minimum. For example, the northern hemispheric temperatures are significantly dependent on the direction of solar dipole magnetic field. At the phases of negative polarity of dipole magnetic field, when GCRs show anomalous increase, we observe colder climate. The dependence of climate change on solar dipole magnetic field results in the manifestation of 22-year cycle in climate change. The cause of decadal to multi-decadal climate changes had not been well understood, however, our study suggests that GCRs may be the playing important role in climate change at those time scales.
Conclusion
More detailed studies are needed to reveal the mechanisms of solar influence on climate change; however, our study has suggested that not only solar irradiative outputs but also magnetic property is playing important role in climate change possibly through changing the flux of GCRs. The mechanisms how the cosmic rays change the cloud property should be clarified in the future studies.
References
G. Bond et al., Persistent Solar Influence on North Atlantic Climate During the Holocene, Science, 7, 294, 2130, 2001.
H. Miyahara, Y. Yokoyama & K. Masuda, Possible link between multi-decadal climate cycles and periodic reversals of solar magnetic field polarity, Earth Planet. Sci. Lett., 272, 290-295, 2008.
Y. Takahashi, Y. Okazaki, M. Sato, H. Miyahara, K. Sakanoi, and P. K. Hong, 27-day variation in cloud amount and relationship to the solar cycle, Atmos. Chem. Phys., 10, 1577-1584, 2010.
Posted by MS at 2:34 PM