The EPA's Game of Secret Science


The agency pursues rules that will cost billions but refuses to reveal its research. Maybe a subpoena will be needed.

WSJ.COM 7/29/13: As the Environmental Protection Agency moves forward with some of the most costly regulations in history, there needs to be greater transparency about the claimed benefits from these actions. Unfortunately, President Obama and the EPA have been unwilling to reveal to the American people the data they use to justify their multibillion-dollar regulatory agenda.


To cite a few examples of where the EPA would like to take the country, the agency is moving forward with strict new limits on ozone that by its own estimates will cost taxpayers $90 billion per year, which would make the regulation the most costly in history. Other examples include a Mercury and Air Toxics Standard for power plants (previously known as "Utility MACT") that the EPA estimates could cost up to $10 billion a year. Yet more than 99% of the EPA's health-based justifications for the rule are derived from scientific research that the EPA won't reveal. Taxpayers are supposed to take on faith that EPA policy is backed by good science.


We know this much: Virtually every major EPA air-quality regulation under President Obama has been justified by citing two sets of decades-old data from the Harvard Six Cities Study and the American Cancer Society's Cancer Prevention Study II. The EPA uses the data to establish an association between fine-particulate emissions and mortality. 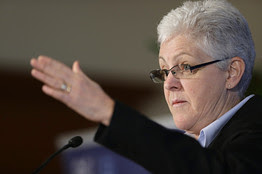 
For two years, the House Science, Space and Technology Committee, of which I am the chairman, has sought to make this information available to the public. But the EPA has obstructed the committee's request at every step. To date, the committee has sent six letters to the EPA and other top administration officials seeking the data's release.


In September 2011, the EPA's then-Assistant Administrator Gina McCarthy committed to provide these data sets to the committee. But the data still remain out of sight. Ms. McCarthy was recently confirmed by the Senate as administrator of the EPA. Now that she leads the agency, Ms. McCarthy has no excuse not to make these taxpayer-funded studies public.


Simple transparency is not the only reason this information should be released. The costs of these rules will be borne by American families. They deserve to know what they are paying for. Time is almost up. If the administration does not provide this data by the end of July, the science committee will force its release through a subpoena.


The federal government has no business justifying regulations with secret information. This principle has been supported by two of the president's own science and technology advisers, John Holdren and Deborah Swackhamer. "The data on which regulatory decisions and other decisions are based should be made available to the committee and should be made public," said Dr. Holdren in testimony before the committee last year. Executive-branch rules dating to the Clinton administration require that federally funded research data be made publicly available, especially if it is used for regulatory purposes.


The data in question have not been subjected to scrutiny and analysis by independent scientists. And the EPA does not subject its cost-benefit claims to peer review. This means we have no way of evaluating the quality of the science being used to justify the agency's claims.


The withholding of information is troubling—and not just because it is being done by "the most transparent administration in history," as the president boasted in February. The National Academy of Sciences declared in 2004 that the data the EPA is using is of "little use for decision-making." Similarly, President Obama's Office of Management and Budget recently acknowledged that "significant uncertainty remains" about the EPA's claims based on its data sets, saying that the claims "may be misleading" and should be treated with caution.


Yet the EPA presses on: The same data are used to justify the agency's claims about the health benefits of recent proposals to limit emissions for refineries and vehicles. The agency is also poised to use the data to justify its expensive new ozone standards—the EPA's Regulatory Impact Analysis estimated that lowering the ozone standard to 60-70 parts per billion would cost up to $90 billion per year in compliance costs. The regulation could force large areas of the country into non-attainment, a designation that would drastically limit economic growth. Inevitably, the costs would be borne by working families and would include higher gasoline and electricity prices.


The administration's reliance on secret science doesn't stop there. President Obama's ambitious and costly new climate agenda is backed by a finding from a federal interagency working group regarding the "social cost of carbon." How that "social cost" was determined remains unclear. This new justification for economy-wide regulations was developed without public comment or peer review.


The U.S. saw dramatic improvements in air quality well before the Obama administration came to Washington, yet the White House has upped the ante, launching an aggressive anti-fossil-fuel, regulatory assault on affordable energy—while refusing to reveal the scientific basis for the campaign. The EPA should reveal the research it uses and let the American people decide whether the agency's costly regulations are justified.
Rep. Lamar Smith represents the 21st District of Texas and is chairman of the House Committee on Science, Space and Technology.
Posted by MS at 4:47 PM