The paper adds to well over 1,000 others in the published scientific literature finding that recent temperatures are not unprecedented, unusual, or unnatural in the context of the past several millennia. 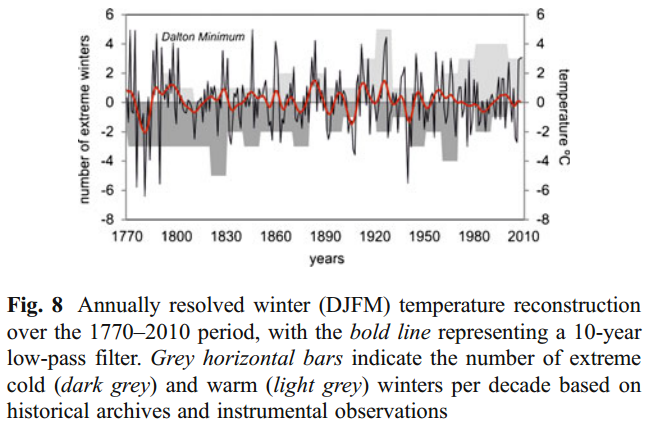 An attempt to dendroclimatic reconstruction of winter temperature based on multispecies tree-ring widths and extreme years chronologies (example of Upper Silesia, Southern Poland)

This study aims at investigating pre-instrumental tree-ring based winter thermal conditions from Upper Silesia, southern Poland. The Scots pine, pedunculate oak and sessile oak ring widths and the extreme index were used to reconstruct winter mean temperature back to A.D. 1770. The climate response analysis showed that the pine is the most sensitive to February (0.36) and March (0.41) temperature, the oaks were found to be sensitive to the previous December (0.27) and January (0.23) temperature. It was found out that the combination of temperature sensitive species and an additional extreme index in regression can improve the reconstruction, with an emphasis on more reliable reconstruction of extreme values. The elimination of variance reduction and precise reconstruction of actual values of temperature is possible by scaling. The obtained calibration/verification results suggest that, through the application of the long-term composite chronologies a detailed study of the climate variability in Upper Silesia in past centuries can be provided.
Posted by MS at 10:18 PM