A paper published today in Nature Climate Change attempts to revive the Gergis et al zombie hockey stick, but as Steve McIntyre and others have already observed, the paper is a reworking of a previously discredited paper, and is "non-compliant with [anti-data-torturing] protocols on several important counts, including its unprecedented ex-post screening [only using proxies that show a hockey stick shape, rejecting non-hockey-sticks] and its reliance on the same proxies that have been used in multiple previous studies." 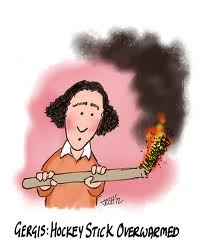 
The Southern Hemisphere reconstruction presented here allows new insights into the characteristics of the global climate system. For example, it has been proposed that the Southern Hemisphere response to external forcing may be delayed and buffered by the large heat capacity of the oceans17, 18. The greater amplitude of pre-industrial temperature variation in the Northern Hemisphere (0.67 °C ± 0.46 °C (2σ ensemble spread) versus 0.37 °C ± 0.11 °C in the Southern Hemisphere), the approximately two-century Northern Hemisphere lead during medieval times and the approximately 25 year lead during the era of industrial warming are in line with this hypothesis. However, we find no evidence for a consistent lag between Northern Hemisphere and Southern Hemisphere temperatures (Supplementary Section 8). The coherent and extreme cool conditions in both hemispheres around 1600 are unique within the past millennium and now offer perhaps the most viable explanation for the drop in global CO2 (difference of 8.37 ppm or 0.19 W m−2 between 1540–1580 and 1600–16405, 19, 20; Fig. 3d), which may not be sufficiently explained by land use change21 or Northern Hemisphere-temperature–CO2 feedbacks5.
Our results suggest that large, internally driven temperature contrasts between the hemispheres, such as identified in the twentieth century2 have repeatedly occurred on the policy-relevant multi-decadal to centennial timescales. This finding is strengthened by evidence from annually resolved regional temperature reconstructions14, 22, 23 and the timing of glacial fluctuations in New Zealand and the Northern Hemisphere24. Our data support hypotheses that global and hemispheric temperature extremes and transitions may be initiated11, 16, 25 and prolonged26 by internal variability and feedbacks. Analyses targeting periods where climate models and reconstructions differ will be necessary to identify weaknesses in both proxy- and model-based representations of the Earth’s climate system. However, the strong inter-hemispheric coupling in the simulations assessed herein suggests that models overestimate the strength of externally forced relative to internal climate system variability, therefore implying more limited predictability not only on regional1, 27 but also hemispheric scales. The stronger coherence between the Northern Hemisphere temperature reconstructions and external forcings similarly implies that detection and attribution studies10 and climate sensitivity estimates5, 6 based on Northern Hemisphere data alone may not be representative of the global climate system. Future consideration of Southern Hemisphere temperature evolution should reduce uncertainties in estimating and attributing natural and anthropogenically forced climate variations.

We use the Southern Hemisphere spatial mean of the Goddard Institute for Space Studies (GISS) Surface Temperature Analysis (GISTEMP) temperature grid28 as the instrumental predictand for the reconstruction. The palaeoclimate data network15 consists of 48 marine (46 coral and 2 sediment time series) and 277 terrestrial (206 tree-ring sites, 42 ice core, 19 documentary, 8 lake sediment and 2 speleothem) records (details in Supplementary Section 1). Although proxy records are preferentially located towards land areas, the network represents a considerable improvement of both geographical coverage and proxy quantity and quality (for example, resolution, length) since the last Southern Hemisphere reconstruction effort4. Proxies are screened with local grid-cell temperatures28 yielding 111 temperature predictors (Fig. 1) for the nested multivariate principal component regression procedure23. A 3,000-member ensemble reconstruction of annual Southern Hemisphere temperatures over the period 1000–2000 was generated with the spread of ensemble members considered a measure of uncertainty.
For each ensemble member we use different reconstruction parameters by randomly selecting a subset of proxies, as well as varying the calibration/verification intervals within 1911–1990, and other reconstruction parameters (details in Supplementary Section 2.2). The perturbation of calibration/verification periods allows a ‘verification ensemble mean’ to be calculated over the 1911–1990 period by averaging all members where a given year was used for verification (and not for calibration). Analogously, a ‘calibration ensemble mean’ was calculated. These time series and their corresponding Reduction of Error (RE) skills are shown in Fig. 1c, b, respectively. These statistics along with additional verification based on the sparse early Southern Hemisphere instrumental data (RE = 0.41–0.90; Supplementary Fig. 10) point to reconstructive skill over the past millennium. In addition to traditional reconstruction uncertainty estimates based on regression residuals, we assess the influence of the ensemble perturbations on the reconstruction outcome. Uncertainty envelopes in Fig. 2a represent combined calibration and ensemble uncertainties (details inSupplementary Section 2.4).
Although we have taken steps to provide robust results considering the challenges of proxy-based reconstructions (for example, potential underestimation of past climate amplitudes) discussed in the literature, we note that all reconstruction approaches contain uncertainties. The fact that our reconstruction verifies well and captures interannual and decadal-scale temperature fluctuations during the instrumental period (Fig. 1 and Supplementary Section 3) indicates reduced probability of such artefacts. An extensive assessment of reconstruction robustness is provided inSupplementary Section 3.2 and Supplementary Figs 13–26, with tests demonstrating that the potential bias introduced by the proxy-screening and reconstruction methods or by single dominant records or proxy archives is small.