A new paper published in Geophysical Research Letters finds the Transient Climate Response to cumulative CO2 emissions is less than half that claimed by the IPCC. According to the authors, the transient climate response is 0.76–1.04 °C [mean 0.9C], compared to 1.2-2.6C [mean 1.9C] in the 2007 IPCC report, an exaggeration of 111%.

According to the authors, "we find the range of Transient Climate Response to cumulative Emissions [TCRE] resulting from varying emission pathways to be 0.76 to 1.04 °C/TtC. This range, however, is small compared to the uncertainty resulting from varying model physics across the CMIP5 ensemble", i.e. the so-called settled, incontrovertible, "basic physics" in the various models produce widely divergent results. 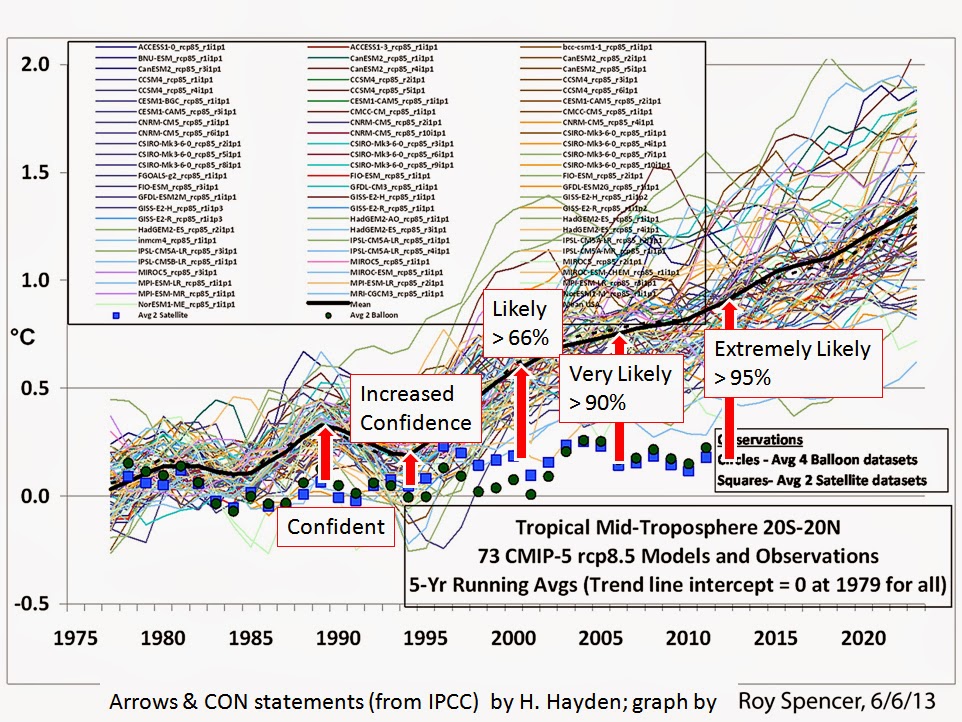 Geophys. Res. Lett. http://doi.org/rv2 (2014)
Transient climate response to emissions (TCRE) is a metric used to relate surface air temperature increases to cumulative emissions. It is thought to be independent of the rate of CO2 emissions. Using seven different emissions scenarios — ranging from 2 to 25 gigatonnes of carbon per year — to force an Earth Systems Model, John Krasting, of the Geophysical Dynamics Laboratory, NOAA, Princeton, USA, and colleagues calculate TCRE ranges and their robustness to varying emissions levels. Each experiment was integrated for 200 years, or until there was a doubling of atmospheric CO2.
TCRE is reported as 0.76–1.04 °C [mean 0.9C], with high-end values for the lowest and highest emissions tested indicating the metric is robust to emission level changes. It is smallest for 5–10 gigatonnes of carbon per year, which is in-line with current emission levels. Although the relationship between TCRE and emission rate is a complex function of climate-carbon cycle feedbacks, it is a small source of uncertainty relative to that generated by model differences.
Trajectory sensitivity of the transient climate response to cumulative carbon emissions

The robustness of Transient Climate Response to cumulative Emissions (TCRE) is tested using an Earth System Model (GFDL-ESM2G) forced with 7 different constant rates of carbon emissions (2 GtC/yr to 25 GtC/yr), including low emission rates that have been largely unexplored in previous studies. We find the range of TCRE resulting from varying emission pathways to be 0.76 to 1.04 °C/TtC. This range, however, is small compared to the uncertainty resulting from varying model physics across the CMIP5 ensemble. TCRE has a complex relationship with emission rates; TCRE is largest for both low (2 GtC/yr) and high (25 GtC/yr) emissions and smallest for present-day emissions (5-10 GtC/yr). Unforced climate variability hinders precise estimates of TCRE for periods shorter than 50 years for emission rates near or smaller than present day values. Even if carbon emissions would stop, the prior emissions pathways will affect the future climate responses.
Posted by MS at 2:11 PM