In the Forecast: A Better Way to Measure the Temperature

Meteorologists aren't so hot on temperature as a way to describe the weather.
Temperature, which measures the kinetic energy of air particles, is the core figure in any weather forecast or report. But it doesn't account for lots of factors that affect how it feels when you walk outside. Wind takes away body heat, humidity prevents the body from cooling, and being in the sunlight makes the body warmer.
Averaging temperatures over a day or week or month obscures even more information, such as variation in climate throughout the day. 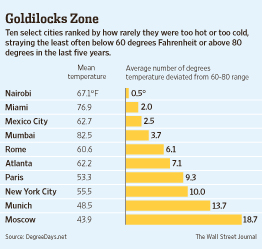 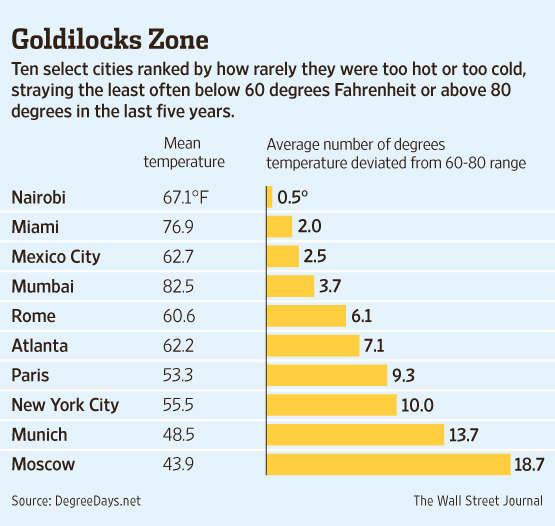 To clear the air, some meteorologists are pushing a new generation of temperature-like figures that go far beyond the reading on the thermometer or even wind-chill and heat indexes that try to account for the impact of wind or humidity.
"We don't feel air temperature," says Gerd Jendritzky, a retired meteorologist with Germany's national weather service. "What we feel is the temperature" of our body. And many factors influence that, beyond wind and humidity. Dr. Jendritzky says indexes that incorporate only one or both of these are "simple."
The quest to expand weather reporting beyond temperature numbers has been a long one. The wind-chill index used until nearly a decade ago was based in part on the rate at which plastic bottles full of water, meant to simulate the human body, lost heat in varying wind conditions. Updated tests, based on a handful of volunteers in specific conditions, found that wind doesn't increase the perception of cold to quite the extent previously thought. That was incorporated into a new formula that is used for wind-chill measurements today.
Dr. Jendritzky says meteorologists can do better. He has led a group of meteorologists world-wide in development of a new formula for what they are calling the Universal Thermal Climate Index—in the same scale as temperature, but meant to convey what it really feels like. It is based on a scientific model of 340 parts of the body—since conditions around the body affect the temperature of different parts differently, according to Dr. Jendritzky. The results will be published in a coming issue of a meteorological scientific journal, culminating what has been for him a three-decade search for a better temperature number.

See mean temperatures for 66 global cities for the last year and last five years, plus other measures. 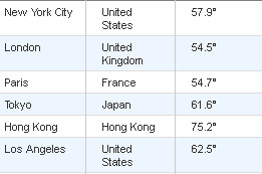 Meanwhile, if you want to look up the UTCI for your hometown, you're out of luck. Some of the data required isn't routinely collected or reported by major national meteorological services. "Hopefully, step by step people will accept that it makes sense," Dr. Jendritzky says, "and change their routine procedures."
Other meteorologists support the initiative—once they have heard about it. "These are the right kind of folks to do this," says Bruce Rose, a scientific consultant to the Weather Channel and its former principal scientist. "I would get behind it." However, an inquiry from The Wall Street Journal was the first he had heard about it.
In the meantime, Weather Channel has used a simpler measure, called "feels like," to express temperature in a temperature-like number, taking into account wind chill at low temperatures and humidity at high temperatures.
Weather Channel competitor Accuweather, meanwhile, uses an index it calls RealFeel Temperature, which it introduced in 1997. This past week, it began forecasting RealFeel along with other weather variables 25 days into the future. The company says it takes into account more than a dozen factors in computing RealFeel, but doesn't say what they are nor how it is computed.
If a temperature reading can't account for wind, humidity and even how individuals experience weather, then an average temperature for a city is even more limited. Yet it is often reported on weather sites and in travel guides.
Such averages—such as the reports that the winter was especially mild in the U.S. this past year—obscure variations during the day and throughout the time period in question. BizEE Software, a South Wales, U.K., company that develops software to help building managers assess their energy-fuel needs, publishes a measure called degree days for places around the world that highlights this variation in temperature. Degree days are the result of multiplying the time that a place is outside a comfortable range of temperature by the number of degrees it has strayed from that range.
This week, BizEE, at The Wall Street Journal's request, used the data to assess which cities' temperatures strayed outside the range of 60 degrees to 80 degrees Fahrenheit the most over the last year, and five years, through Wednesday. Temperature has its weaknesses, but is useful for indicating comfort, and the costs to maintain that comfort, while people are indoors—where humidity, sunlight and wind matter less. The results show that organizers of the 2016 summer Olympics and 2014 World Cup, both in Brazil, may have had their eyes on the weather. Rio de Janeiro and Sao Paolo ranked second and third, respectively, among 66 large global cities in staying the closest to that comfort range.
"Being a total geek, I'll look at degree days over average temperature when going on holiday," says Martin Bromley, one of two directors of BizEE.
Posted by MS at 8:50 AM