By LIAM DENNING   WSJ.COM  4/9/12
The birth of the mouse is a famous cautionary tale from Silicon Valley. In it, Xerox develops an early version of the now-ubiquitous PC pointer, but Steve Jobs and Apple actually make it ubiquitous. The warning—first movers don't always end up dominating a particular field—applies to another hot technology: solar power.
In June 2008, solar-panel manufacturers looked poised to conquer the world. The 12 largest had a combined market value of about $70 billion, according to Sanford C. Bernstein. Today, they are worth about $6.4 billion. One of them, Germany's Q-Cells, filed for bankruptcy last week. On the same day First Solar, which alone was worth more than $20 billion in 2008, saw its stock slump by almost 8%. The company is now worth less than $2 billion. 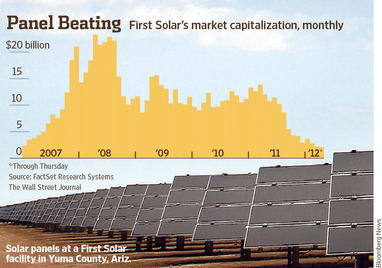 First Solar has suffered several setbacks recently, not least having to make higher warranty provisions because its solar modules may suffer "increased failure rates in hot climates" (think about that one for a second.)
The bigger issue for First Solar and peers is a structural shift in the industry. In 2008, governments, particularly in Europe, offered generous subsidies to boost solar power; carbon caps in the U.S. seemed not far off; and financing flowed easily. Equipment manufacturers were expanding quickly and driving down costs to make solar power competitive with rival sources like coal and natural gas.
One financial crisis later, public subsidies and private financing are far tighter. In the U.S., shale gas has upended the economics of electricity. Citigroup reckons that even at an installed cost of $1.50 per watt for new projects, even in the sunniest regions, solar can't compete with efficient plants burning natural gas at a cost of $5 per million British thermal units. Right now, gas costs less than half that and even utility-scale U.S. solar projects cost well north of $2 per watt.
Still, the solar-power industry has successfully cut the cost of equipment. The problem is how it has done it. All those juicy subsidies attracted competitors, particularly from China. The result is an industry that will likely end the year with the capacity to build 40 gigawatts of solar modules, according to Citi—which also estimates demand this year of just 24GW. The bank doesn't expect annual demand to hit 40GW anytime this decade.
This oversupply is driving down prices for solar panels. Bernstein puts the compound annual decline at 32% between 2007 and 2011, noting the eerie similarity with the price of computer memory, which has fallen at an annual compound rate of 33.4% since 1974. 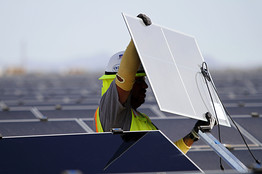 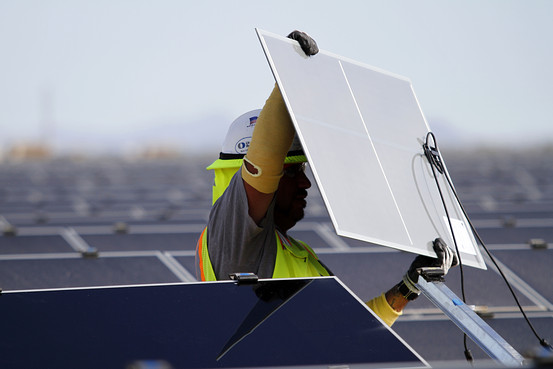 Joshua Lott/Bloomberg News
First Solar panels being installed in Yuma County, Arizona, in February
Such falls are great for the technology concerned as it expands the available market. But the resulting commoditization, with competition focused increasingly on price, isn't great for the firms involved as the economic benefits leak away to others. Falling profit margins and share prices—as well as bankruptcies—are the unfortunate result.
Another analogy can be drawn with the U.S. exploration and production sector, which did very well to develop lots of natural-gas reserves. But the resulting oversupply has damaged the economics of the business. Value is accruing instead to those who transport and use the fuel. Increasingly, the likes of Exxon Mobil are muscling in. These bigger companies are willing and able to absorb the near-term pain of low prices in anticipation of a coming age of gas.
The bull case for solar power is that when prices drop low enough to compete without the aid of government subsidies, the resulting expansion of demand will boost the industry's fortunes.
Indeed it will. But the winners won't necessarily be the pioneers we are familiar with today. Rather, they will likely be companies with the scale to compete on price and absorb the inevitable cyclical losses that afflict most manufacturing industries prone to bouts of oversupply. A smaller group of large companies like General Electric, for example, look more like the long-term winners as solar power eventually finds its place in the sun.
Posted by MS at 9:51 AM