WSJ Op-Ed: We have to kill eagles with wind turbines in order to save them

Why isn't the wind industry subject to the Bald and Golden Eagle Protection Act?

For some environmentalists, the threat of climate change is so great that we must allow wind turbines to kill bald and golden eagles. The argument I've heard is that renewables, including wind energy, will reduce the amount of carbon dioxide in the atmosphere. Less carbon dioxide reduces the threat posed by climate change, which benefits eagles and other wildlife.
In other words, we have to kill eagles in order to save them.
If this sounds far-fetched, consider the notice that the U.S. Fish and Wildlife Service published in the Federal Register on Sept. 27. It seeks public comment on a proposed permit that will allow a wind project to kill up to five golden eagles over a five-year period, despite their protected status under the Bald and Golden Eagle Protection Act.
The permit is sought for the Shiloh IV Wind Project in Solano County, Calif. If it is granted, it would formally recognize a legal double standard that is already in existence with regard to wildlife protection in America.
Wind projects routinely violate the Bald and Golden Eagle Protection Act and the Migratory Bird Treaty Act, but no wind farm has ever faced a single prosecution. Meanwhile, companies in the oil and gas industry and other sectors are routinely indicted for violating those same statutes.
The illegal bird kills are not insubstantial. On Sept. 11, some of Fish and Wildlife's top raptor biologists published a study in the Journal of Raptor Research that found the number of eagles killed by wind turbines increased to 24 in 2011 from two in 2007. In all, some 85 eagles have been killed since 1997. Joel Pagel, the study's lead author, recently told me that the figure is "an absolute minimum." Among the carcasses: six bald eagles. 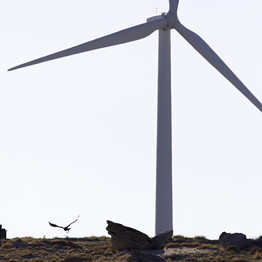 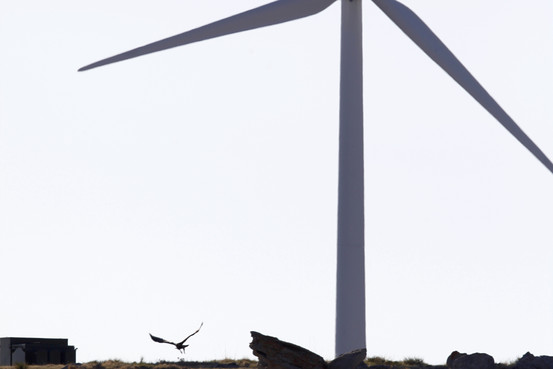 Associated Press
A golden eagle flies near a wind turbine on a wind farm near Glenrock, Wyo.
Mr. Pagel's study was published just five months after Fish and Wildlife issued a report that stated "there are no conservation measures that have been scientifically shown to reduce eagle disturbance and blade-strike mortality at wind projects." So if more turbines are built, more eagles will be killed.
Wind turbines overall kill some 573,000 birds per year including 83,000 birds of prey, according to a study this March in the Wildlife Society Bulletin. Yet the effect that wind power has on reducing global carbon-dioxide emissions is so small as to be insignificant. Elementary math proves that point.
The American Wind Energy Association claims that in 2012 wind energy production reduced domestic CO2 emissions by 80 million tons. Last year, global emissions of that gas totaled 34.5 billion tons. Thus, the 60,000 megawatts of U.S. wind-generation capacity reduced global carbon-dioxide emissions by about two-tenths of 1%. To achieve a 1% reduction in global carbon-dioxide emissions, the U.S. would have to install at least 120,000 more turbines (assuming each machine has a capacity of two megawatts).
Last year, all of the wind turbines on the planet provided the energy equivalent of about 2.4 million barrels of oil per day. But over the past decade, the annual increase in coal use averaged some 2.6 million barrels of oil equivalent per day. Merely to keep pace with the soaring growth in coal usage, the world's electricity producers would have to nearly replicate the entire global fleet of wind turbines—some 285,000 megawatts of capacity, or roughly 142,000 turbines—every year.
There are two scandals here. First, wind turbines are killing legally protected eagles in the name of slowing climate change, but whatever reductions in carbon-dioxide emissions that may be occurring is equivalent to a baby's burp in a hurricane.
Second, the wind-energy industry is lobbying to extend a production tax credit—the 2.2 cent-per-kilowatt-hour subsidy that has fueled the turbine-building craze over the past few years. Last year the subsidy was extended for one year, at a cost to taxpayers of $12 billion. Another one-year extension will cost an additional $6.1 billion, according to a recent estimate by the congressional Joint Tax Committee.
It's bad enough that this so-called green industry wants to continue killing eagles with impunity. Taxpayers should not be subsidizing the slaughter.
Mr. Bryce is a senior fellow at the Manhattan Institute.
Posted by MS at 5:06 PM