The authors also find "solar activity may have contributed 40% or more to the last century temperature increase" and "For 3 North Atlantic stations we get 63–72% solar contribution [to the temperature increase of the past 150 years]. This points to the Atlantic currents as reinforcing a solar signal."

A co-author of the paper is geoscientist Dr. Ole Humlum, who demonstrated in a prior paper that CO2 levels lag temperature on a short-term basis and that CO2 is not the driver of global temperature.


Update: As pointed out by commenters at WUWT, this paper was published in 2012. For some odd reason it appeared for the first time in my RSS feed from the Journal of Atmospheric and Solar-Terrestrial Physics today and thus was incorrectly stated to have been published online today.

from solar cycle 23 to solar cycle 24 for the stations and areas analyzed. We find for the Norwegian local stations investigated that 25–56% of the temperature increase the last 150 years may be attributed to the Sun. For 3 North Atlantic stations we get 63–72% solar contribution. This points to the Atlantic currents as reinforcing a solar signal.

► A longer solar cycle predicts lower temperatures during the next cycle. ► A 1 °C or more temperature drop is predicted 2009–2020 for certain locations. ► Solar activity may have contributed 40% or more to the last century temperature increase. ► A lag of 11 years gives maximum correlation between solar cycle length and temperature.

The question of a possible relation between solar activity and the Earth's climate has received considerable attention during the last 200 years. Periods with many sunspots and faculae correspond with periods with higher irradiance in the visual spectrum and even stronger response in the ultraviolet, which acts on the ozone level. It is also proposed that galactic cosmic rays can act as cloud condensation nuclei, which may link variations in the cloud coverage to solar activity, since more cosmic rays penetrate the Earth's magnetic field when the solar activity is low. A review of possible connections between the Sun and the Earth's climate is given by Gray and et al. (2010).
Based on strong correlation between the production rate of the cosmogenic nucleids 14C and 10Be and proxies for sea ice drift, Bond et al. (2001) concluded that extremely weak perturbations in the Sun's energy output on decadal to millennial timescales generate a strong climate response in the North Atlantic deep water (NADW). This affects the global thermohaline circulation and the global climate. The possible sun–ocean–climate connection may be detectable in temperature series from the North Atlantic region. Since the ocean with its large heat capacity can store and transport huge amounts of heat, a time lag between solar activity and air temperature increase is expected. An observed time lag gives us an opportunity for forecasting, which is the rationale for the present investigation.
Comparing sunspot numbers with the Northern Hemisphere land temperature anomaly, Friis-Christensen and Lassen (1991) noticed a similar behavior of temperature and sunspot numbers from 1861 to 1990, but it seemed that the sunspot number R appeared to lag the temperature anomaly. They found a much better correlation between the solar cycle length (SCL) and the temperature anomaly. In their study they used a smoothed mean value for the SCL with five solar cycles weighted 1-2-2-2-1. They correlated the temperature during the central sunspot cycle of the filter with this smoothed weighted mean value for SCL. The reason for choosing this type of filter was that it has traditionally been used to describe long time trends in solar activity. However, it is surprising that the temperature was not smoothed the same way. In a follow up paper Reichel et al. (2001) concluded that the right cause-and-effect ordering, in the sense of Granger causality, is present between the smoothed SCL and the cycle mean temperature anomaly for the Northern Hemisphere land air temperature in the 20th century at the 99% significance level. This suggests that there may exist a physical mechanism linking solar activity to climate variations.
The length of a solar cycle is determined as the time from the appearance of the first spot in a cycle at high solar latitude, to the disappearance of the last spot in the same cycle near the solar equator. However, before the last spot in a cycle disappears, the first spot in the next cycle appears at high latitude, and there is normally a two years overlap. The time of the minimum is defined as the central time of overlap between the two cycles (Waldmeier, 1939), and the length of a cycle can be measured between successive minima or maxima. A recent description of how the time of minimum is calculated is given by NGDC (2011): “When observations permit, a date selected as either a cycle minimum or maximum is based in part on an average of the times extremes are reached in the monthly mean sunspot number, in the smoothed monthly mean sunspot number, and in the monthly mean number of spot groups alone. Two more measures are used at time of sunspot minimum: the number of spotless days and the frequency of occurrence of old and new cycle spot groups.”
It was for a long time thought that the appearance of a solar cycle was a random event, which means that each cycle length and amplitude were independent of the previous. However, Dicke (1978) showed that an internal chronometer has to exist inside the Sun, which after a number of short cycles, reset the cycle length so the average length of 11.2 years is kept. Richards et al. (2009) analyzed the length of cycles 1610–2000 using median trace analyses of the cycle lengths and power spectrum analyses of the O–C residuals of the dates of sunspot maxima and minima. They identified a period of 188±38 years. They also found a correspondence between long cycles and minima of number of spots. Their study suggests that the length of sunspot cycles should increase gradually over the next

. accompanied by a gradual decrease in the number of sunspots.
An autocorrelation study by Solanki et al. (2002) showed that the length of a solar cycle is a good predictor for the maximum sunspot number in the next cycle, in the sense that short cycles predict high Rmax and long cycles predict small Rmax. They explain this with the solar dynamo having a memory of the previous cycle's length.
Assuming a relation between the sunspot number and global temperature, the secular periodic change of SCL may then correlate with the global temperature, and as long as we are on the ascending (or descending) branches of the 188 year period, we may predict a warmer (or cooler) climate.
It was also demonstrated (Friis-Christensen and Lassen, 1992, Hoyt and Schatten, 1993 and Lassen and Friis-Christensen, 1995) that the correlation between SCL and climate probably has been in operation for centuries. A statistical study of 69 tree rings sets, covering more than 594 years, and SCL demonstrated that wider tree-rings (better growth conditions) were associated with shorter sunspot cycles (Zhou and Butler, 1998).
The relation between the smoothed SCL and temperature worked well as long as SCL decreased as shown inFig. 1. But when the short cycle SC22 was finished Thejll and Lassen (2000) reported a developing inconsistency. In order to explain the high temperatures at the turn of the millennium, the not yet finished SC23 had to be shorter than 8 years, which was very unlikely, since there had never been observed two such short cycles in a row (see Fig. 1). They concluded that the type of solar forcing described with this SCL model had ceased to dominate the temperature change. Since the final length of SC23 became 12.2 years, the discrepancy became even bigger. 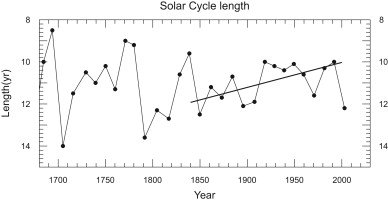 Significant linear relations are found between the average air temperature in a solar cycle and the length of the previous solar cycle (PSCL) for 12 out of 13 meteorological stations in Norway and in the North Atlantic. For nine of these stations no autocorrelation on the 5% significance level was found in the residuals. For four stations the autocorrelation test was undetermined, but the significance of the PSCL relations allowed for 95% confidence level in forecasting for three of these stations. Significant relations are also found for temperatures averaged for Norway, 60 European stations temperature anomaly, and for the HadCRUT3N temperature anomaly. Temperatures for Norway and the average of 60 European stations showed indifferent or no autocorrelations in the residuals. The HadCRUT3N series showed significant autocorrelations in the residuals.
For the average temperatures of Norway and the 60 European stations, the solar contribution to the temperature variations in the period investigated is of the order 40%. An even higher contribution (63–72%) is found for stations at Faroe Islands, Iceland and Svalbard. This is higher than the 7% attributed to the Sun for the global temperature rise in AR4 (IPCC, 2007). About 50% of the HadCRUT3N temperature variations since 1850 may be attributed solar activity. However, this conclusion is more uncertain because of the strong autocorrelations found in the residuals.
The significant linear relations indicate a connection between solar activity and temperature variations for the locations and areas investigated. A regression forecast model based on the relation between PSCL and the average air temperature is used to forecast the temperature in the newly started solar cycle 24. This forecast model benefits, as opposed to the majority of other regression models with explanatory variables, to use an explanatory variable–the solar cycle length–nearly without uncertainty. Usually the explanatory variables have to be forecasted, which of cause induce significant additional forecasting uncertainties.
Our forecast indicates an annual average temperature drop of 0.9 °C in the Northern Hemisphere during solar cycle 24. For the measuring stations south of 75N, the temperature decline is of the order 1.0–1.8 °C and may already have already started. For Svalbard a temperature decline of 3.5 °C is forecasted in solar cycle 24 for the yearly average temperature. An even higher temperature drop is forecasted in the winter months (Solheim et al., 2011).
Arctic amplification due to feedbacks because of changes in snow and ice cover has increased the temperature north of 70N a factor 3 more than below 60N (Moritz et al., 2002). An Arctic cooling may relate to a global cooling in the same way, resulting in a smaller global cooling, about 0.3–0.5 °C in SC24.
Our study has concentrated on an effect with lag once solar cycle in order to make a model for prediction. Since solar forcing on climate is present on many timescales, we do not claim that our result gives a complete picture of the Sun's forcing on our planet's climate.
Posted by MS at 8:41 AM