A paper published today in Palaeogeography, Palaeoclimatology, Palaeoecology finds extreme flooding in the Amazon 2700 years ago was related to a sharp decrease of solar activity. According to the authors, the low solar activity of the 2700 year ago event "has been also observed in other sites in South America and other regions in the world, although different impacts can be observed in each system."

The authors postulate the very low solar activity 2700 years ago "seems to have provoked cooling on the continents and a southward shift of the ITCZ [Intertropical Convergence Zone] associated with a probable reduction in the Atlantic Meridian Overturning Circulation [AMOC]" ocean oscillation, and in-turn associated with extreme flooding in the Amazon.

The paper also shows that solar activity at the end of the record in the 20th century was at the highest levels of the past 3,500 years. The paper joins many others finding potential solar amplification mechanisms related to the hydrological cycle, and to ocean & atmospheric oscillations. 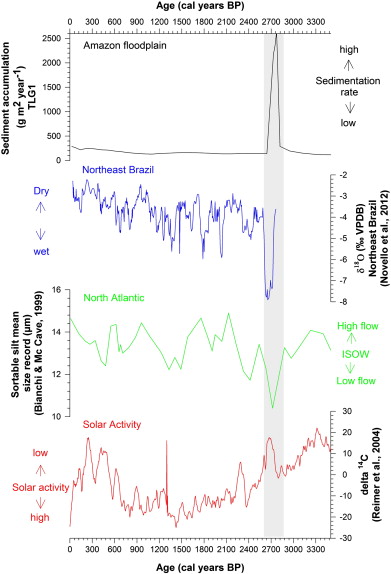 Show more
Choose an option to locate/access this article:
Check if you have access through your login credentials or your institution
Check access
Purchase $37.95

•
A 2700 cal yr BP climatic event provoked extreme floods of Amazon.
•
This event is linked regionally with an intensification of South American Monsoon.
•
It also corresponds to a southward position of ITCZ.
•
Globally the 2700 event is related to solar irradiance minimum.

Climatic conditions are one of the most important factors affecting hydrological processes in fluvial systems. Higher discharges are responsible for higher erosion, greater transport, and also higher deposition. Consequently, sediment accumulation in Amazonia floodplain river-connected lakes can be directly related to hydrological patterns of the Amazon River mainstream. In this context, we analyzed five sediment cores taken in two floodplain systems situated in the lower Amazon River, to investigate sediment accumulation patterns during the Holocene. Our records show abrupt fluctuations in sedimentation rates in lakes that can reach more than 2 cm/yr during some periods. We find that in all cores, sediment stratigraphy is characterized by packages of sediments of uniform age, which are typically 10–80 cm thick and present a variegated color. The 14C age of the upper package is about 2700 cal yr BP. During this abrupt event, sediment accumulation rates in floodplain lakes can be at least 200 times higher than those of “normal” periods. This sedimentation event is interpreted as being the consequence of one or several successive extreme floods. The 2700 cal yr BP event has been also observed in other sites in South America and other regions in the world, although different impacts can be observed in each system. This event probably corresponds to a conjunction of favorable conditions for extreme Amazon discharge associated with the Middle to Late Holocene increase of austral summer insolation and shifts of the Intertropical Convergence Zone (ITCZ) from northern to southern positions. In this context, a marked negative peak in solar irradiance at 2700 cal yrs BP seems to have provoked cooling on the continents and a southward shift of the ITCZ associated with a probable reduction in the Atlantic Meridian Overturning Circulation.
Posted by MS at 4:29 PM