The theory of anthropogenic global warming is based upon the notion that increases in the minor greenhouse gas CO2 result in increases of the major greenhouse gas water vapor, thereby supposedly increasing global warming to alarming levels of 2-5C per doubling of CO2 levels. Without this assumed and unproven positive feedback from water vapor, there is no basis for alarm. While the IPCC confidently stated in their 2007 report,


“The average atmospheric water vapour content has increased since at least the 1980s over land and ocean as well as in the upper troposphere. The increase is broadly consistent with the extra water vapour that warmer air can hold.”

a 2005 paper based on the NASA water vapor data set [called NVAP] showed that water vapor levels had instead declined (with 95% confidence) between 1988-1999. The paper states,


“By examining the 12 year record [1988-1999], a decrease of TPW [total precipitable water vapor] at a rate of -0.29 mm / decade is observed. This relationship is significant at the 95 % but not at the 99 % level [since when do climate scientists insist on a 99% confidence level?]. A downward trend would be intriguing since there should be a positive slope if a global warming signal was present."

If the trend in water vapor is negative instead of positive, there is no positive feedback from water vapor and the theory of catastrophic anthropogenic global warming would be falsified. Climate scientist Dr. Roger Pielke Sr. notes that the NASA  findings "conflict with the conclusion of the 2007 IPCC report." NASA has not released an update of this extremely important NVAP water vapor data for the past 10 years and does not plan to release the data from 2001 through 2010 or the "reanalyzed" 1988-2001 data until "sometime in 2012 or 2013."  However, an online NASA NVAP annual report dated 3/15/11 shows the telling "PRELIMINARY RESULT, NOT FOR DISTRIBUTION" of a continued decline in atmospheric water vapor:
While most NASA data is made available on the internet within a few months of collection and analysis, for some reason NASA NVAP water vapor data -which could either support or undermine the theory of catastrophic anthropogenic global warming- is not going to be officially released for up to 12 years since collection. Is it too much to ask that NASA finishes its analysis and releases this data before the world spends trillions on a potentially non-existent problem? 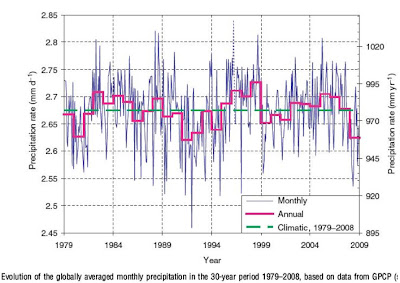 Global precipitation (an indicator of water vapor) is also not increasing as predicted by AGW theory
Related: Paper: Water vapor feedback is negative, not positive as assumed by IPCC alarmists

http://hockeyschtick.blogspot.com/2011/02/teleconference-will-attempt-to-explain.html
Posted by MS at 10:44 PM