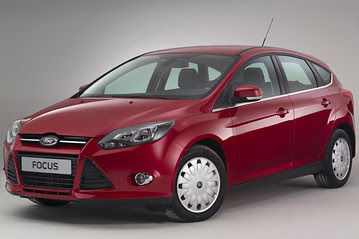 Ford Motor Co. says it will unveil a special high-fuel-mileage version of the Focus compact car next week at the Amsterdam Motor Show. While the car, called the Focus ECOnetic, is designed for the European market it is bound to attract the attention of U.S drivers who increasingly consider fuel economy a priority.
The car maker says the new model combines many fuel saving technologies that are expected to make it the most fuel-efficient compact car on the European market, including gasoline-, diesel- and hybrid-powered vehicles.
Indeed, if Ford’s estimates of about 80 miles per gallon are accurate, the car will use less fuel than many motorcycles and scooters.
Ford says it expects the ECOnetic’s 1.6-liter diesel engine to consume use less than 3.5 liters of fuel per 100 kilometers, which is how they measure mileage in Europe. On my conversion charts that comes out to about 67 miles per gallon. Ford says it expects 80 mpg. Industry experts including officials at Ford say differences in the way cars are tested for fuel economy in the U.S. and Europe can make the results of conversion charts inaccurate.
Either way, though, the ECOnetic’s fuel economy would exceed that of hybrid cars and even many two-wheel vehicles sold in the U.S.
To boost fuel economy the car uses a long list of features that each increase efficiency by small increments. They range from an aerodynamic body, diesel engine with high-pressure fuel injection and special gearing, to tires and transmission oil designed to reduce rolling resistance and mechanical friction.
The Ford also has an automatic stop-start system that turns the engine off when the car is stopped at a traffic light or in other situations where extended idling would waste fuel. Regenerative charging uses braking energy to help charge the battery. A driver-information system called Eco Mode monitors driving styles and gives drivers advice on how they could save more fuel by driving more efficiently.
Ford says the car will arrive in dealer showrooms (in Europe, not U.S.) early next year. It will be available as a five-door hatchback or station wagon.

Plus it will likely sell for about half the cost of a Chevy Volt
Posted by MS at 1:07 PM