A paper presented this week at the INQUA Bern conference reconstructs storm activity over the past 7000 years along the French Mediterranean coast and finds that global warming during the Medieval Warming Period was "characterized by low storm activity" in comparison to cold periods such as the Little Ice Age. The paper concludes that cold periods increase storm activity because of the increase in thermal gradient between the tropics and poles. 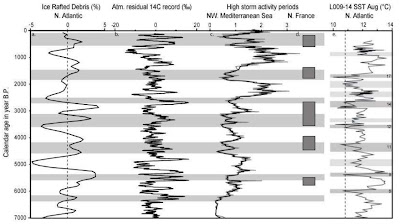 Abstract: A high-resolution record of paleostorm events along the French Mediterranean coast over the past 7,000 years was established from a sediment core from a lagoonal environment in the Gulf of Lions. Using a multi-proxy approach that integrated grain size, faunal analysis, clay mineralogy and geochemistry data with a chronology derived from radiocarbon dating, we recorded seven periods of increased in storm activity at 6,200; 5,400; 4,600-4,200; 3,600-3,100; 2,600; 1,900-1,500 yr cal B.P. and over the Little Ice Age. In contrast, our results show that the Medieval Climate Anomaly was characterised by low storm activity.

These evidences for high storm activity in the NW Mediterranean Sea are in agreement with the changes in coastal hydrodynamics observed over the North Atlantic and correspond to Holocene cooling periods in the North Atlantic. Periods of low SSTs observed in this area may have led to a stronger meridional temperature gradient and a southward migration of the westerlies during these periods. We hypothesise that the increase in storm activity during Holocene cold events over the North Atlantic and Mediterranean regions was probably due to an increase in the thermal gradient that led to an enhanced lower tropospheric baroclinicity over a large Central Atlantic-European domain.

There are several other papers demonstrating that global warming causes a decrease in storm/hurricane activity, including this paper just reviewed by the NIPCC:

According to Clarke and Rendell (2009), "an understanding of the patterns of past storminess is particularly important in the context of future anthropogenically driven climate change," especially in light of "predictions of increased storm frequency ... by the end of the current century." Hence, they say that "a long-term proxy-based record of storminess, extending back into the Holocene, would provide ... a firmer foundation for future predictions." And in the present study they attempt to construct such a record.

Specifically, Clarke and Rendell reviewed evidence for storm activity across the North Atlantic region derived from instrumental records and archival evidence of storm impacts, comparing the information thereby obtained with sedimentological and chronological evidences of sand movement and dune building along western European coasts. In doing so, the two UK researchers determined that "the most notable Aeolian sand drift activity was concentrated in the historic period 0.5-0.1 ka (AD 1500-1900) which spans the Little Ice Age." And they say that "within this period, low solar activity, during the Maunder (AD 1645-1715) and Dalton (AD 1790-1830) Minima, has been related to changes in Atlantic storm tracks (van der Schrier and Barkmeijer, 2005), anomalously cold winter and summer temperatures in Scandinavia (Bjerknes, 1965), and the repositioning of the polar front and changing sea ice cover (Ogilive and Jonsson, 2001)." In addition, they state that "the Holocene record of sand drift in western Europe includes episodes of movement corresponding to periods of Northern Hemisphere cooling (Bond et al., 1997) ... and provides the additional evidence that these periods, like the Little Ice Age, were also stormy."

On the basis of these several real-world reconstructions of North Atlantic storminess that impacted western Europe, it would appear that global warming would result in less rather than more storminess in that part of the planet, in contradiction of most climate-alarmist claims of more frequent and stronger storms there -- and elsewhere -- if the world were to warm any further.