In his book Chill, environmentalist and scientist Peter Taylor outlines why the claimed scientific consensus over the causes and effects of climate change is not what it appears. Taylor outlines in detail why computer models of climate are critically flawed and fail to account for natural variation due to solar activity, clouds, atmospheric cycles, and ocean oscillations. Taylor shows that the alleged contribution of increasing carbon dioxide levels to the warming of the last century is comparatively small relative to the calculated warming due to decreased cloud cover and increase in solar activity over the same period.  In fact, solar effects modulated by cloud cover changes alone can account for all of the observed warming, without any alleged influence of greenhouse gases.


Although the world's climate has undergone many cyclical changes, the phrase 'climate change' has taken on a sinister meaning, implying catastrophe for humanity, ecology and the environment. We are told that we are responsible for this threat, and that we should act immediately to prevent it. But the apparent scientific consensus over the causes and effects of climate change is not what it appears. "Chill" is a critical survey of the subject by a committed environmentalist and scientist. Based on extensive research, it reveals a disturbing collusion of interests responsible for creating a distorted understanding of changes in global climate. Scientific institutions, basing their work on critically flawed computer simulations and models, have gained influence and funding. In return they have allowed themselves to be directed by the needs of politicians and lobbyists for simple answers, slogans and targets. The resulting policy - a 60 percent reduction of greenhouse-gas emissions by 2050 - would have a huge, almost unimaginable, impact upon landscape, community and biodiversity. On the basis of his studies of satellite data, cloud cover, ocean and solar cycles, Peter Taylor concludes that the main driver of recent global warming has been an unprecedented combination of natural events. He urges a shift away from mistaken policies that attempt to avert inevitable natural changes, to an adaptation to a climate that may turn significantly cooler.


Edited excerpts from a review of the book:

The main elements of Taylor's alternative explanation of the causes of climate change are as follows:

§    Variations in the sun’s output of visible light and UV appear capable of producing significant trends as witnessed by the Medieval Warming Period, from 800 to 1300, the Little Ice Age from 1400 to 1700, the recent warming from the 1800’s and the leveling off and cooling from 2000.  (Carbon dioxide levels by comparison fail to correlate with any temperature change except for the period from 1980 to 2000)

§    Variations in the sun’s UV light output have recently been shown to vary significantly over the 11-year sunspot cycle and have implications for the polar vortex and the jet stream.

§      Variations of the solar spectrum appear to have the capacity to affect cloud cover.

§    The pulsed nature of solar energy can be seen to affect ocean surface temperatures over the 11-year cycle, and possibly also over the longer cycles.

§   The greater part of the sun’s energy input (as UV and visible light) is received and stored in the tropical oceans and then moved by the aforementioned currents and atmospheric processes to the poles.

§     Warming on land is strongly related to the transfer of heat by wind and rainfall from the ocean.

§     The Arctic rapid ice loss between 2000 and 2007 can be explained by the return of the Arctic oscillation peak warm phase and is comparable with the Arctic warming of 1940, as part of the 60 to 70 year cycle.  (There is evidence that the Arctic ice has melted several times before.) This is also associated with increased Arctic cloud cover, which, at the poles acts as an insulator, further increasing ice melt.  (Low-level cloud cover in the tropical and sub-tropical regions generally acts in the opposite manner, causing cooling.)

§     There is strong evidence that the major part of the 1980 to 2000 warming was caused by cloud thinning and increased UV and visible light to the ocean and land surface.  The cloud patterns show evidence of phase changes associated with ocean oscillations as well as peaks and troughs of the solar cycle (possibly mediated by cosmic rays which seed cloud formation.)


Excerpts from Amazon's Look Inside 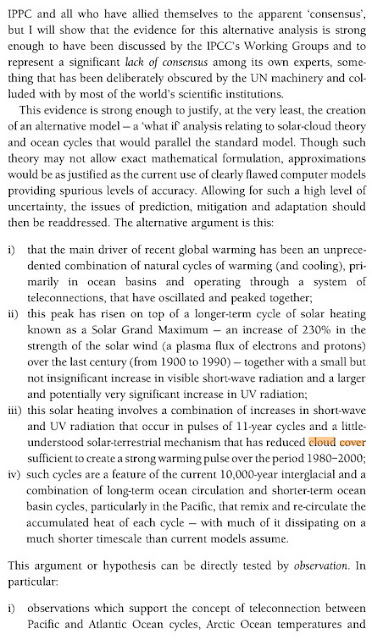 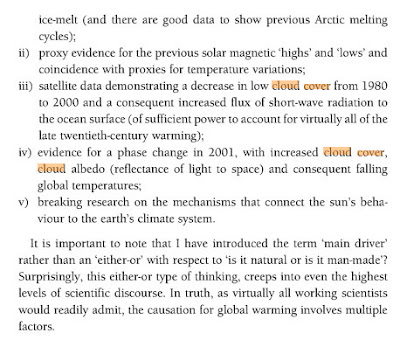 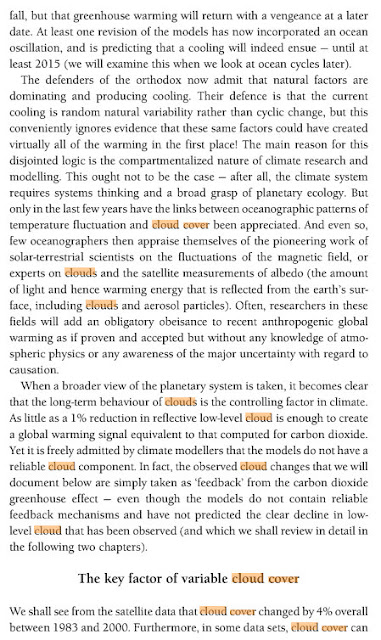 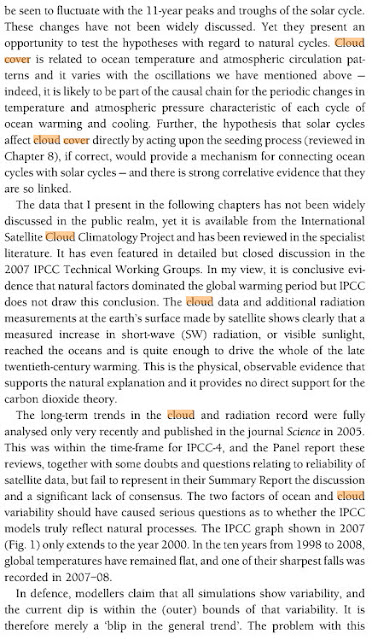 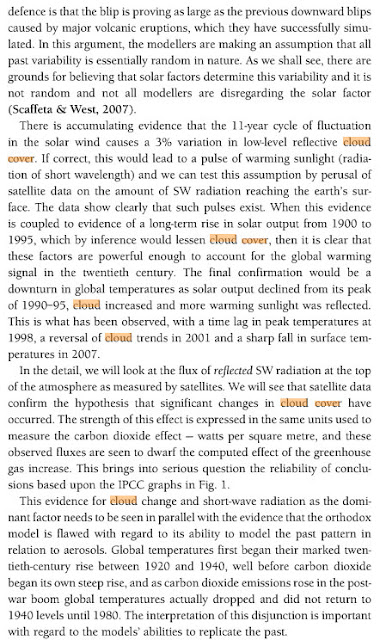 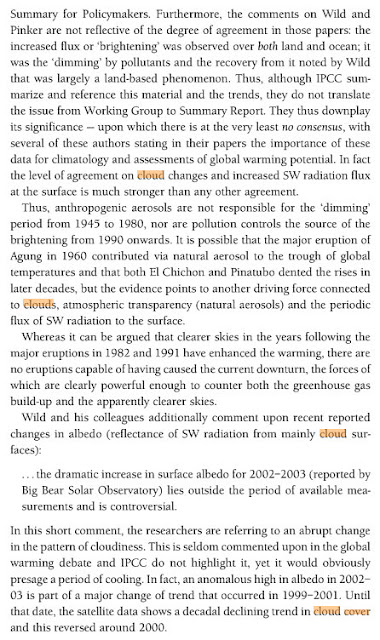 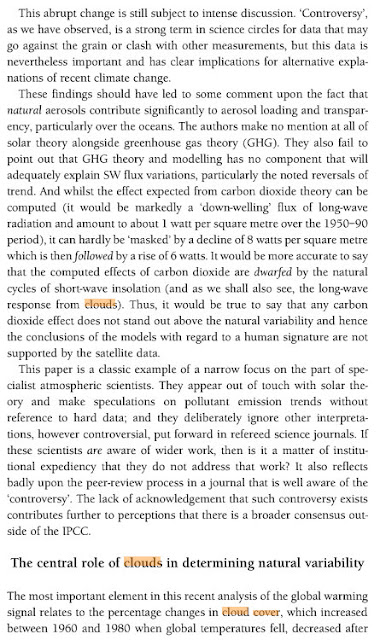 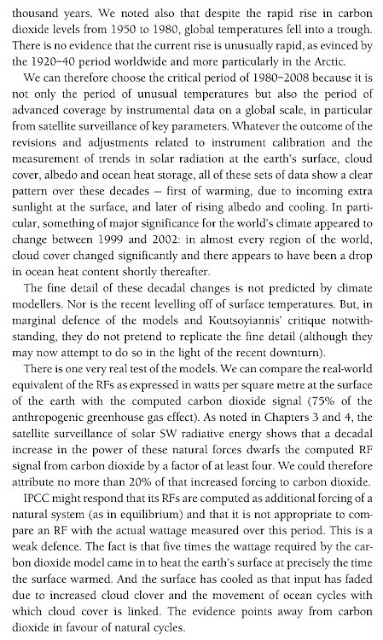 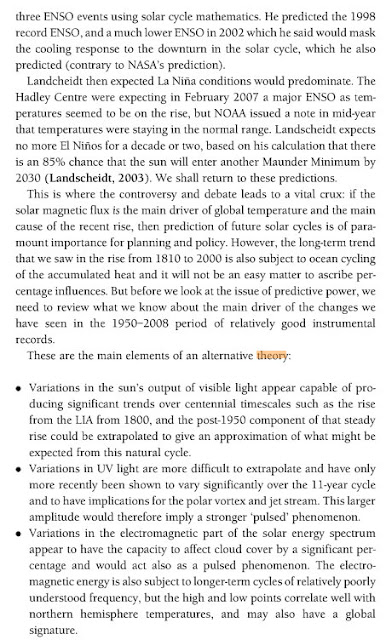 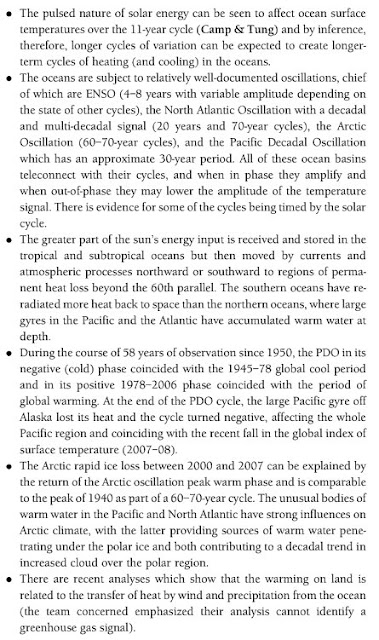 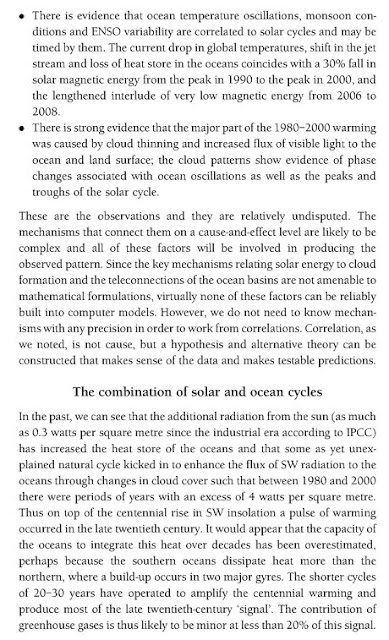 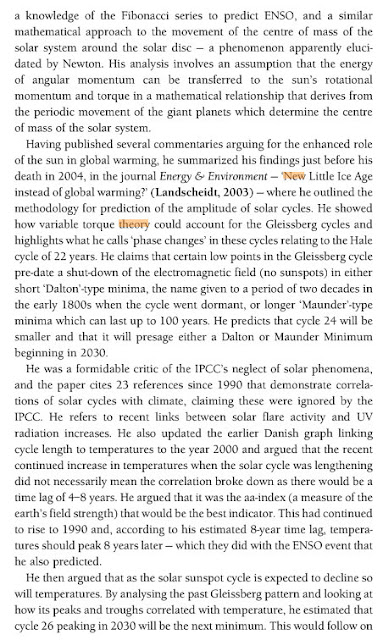