For the e-car to be more than a plaything for the rich, it has to succeed in the mass market.

The Chevy Volt was crowned European Car of the Year for 2012 on March 5. But the celebration was muted by GM's decision—three days earlier—to halt the Volt production line due to a lack of consumer demand. Nissan's Leaf, which won the accolade in 2011, has also fared poorly in the market. Great cars, terrible sales—here is your e-car paradox.
The electric car has become a political litmus test. With billions of federal dollars spent to motivate further billions in private investment, the financial stakes are high, as are the environmental and energy-security implications. But in the tug of war between the caricatures of lefty liberal greens and righty conservative petroheads, love-it or hate-it are the only two options. Where does this leave the supportive, but objective, centrist?
Answer: dismayed with current efforts and desperate for broader solutions. For the electric car to be anything more than a plaything for rich environmentalists—and have any impact on energy security or the environment—it has to succeed in the mass market.
Enlarge Image 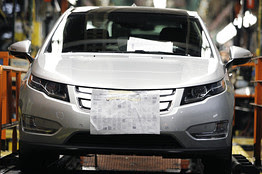 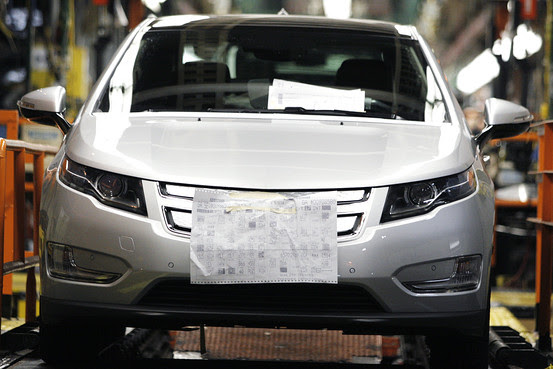 Getty Images
The Chevy Volt
Unfortunately, manufacturers are approaching the electric car as another new product when what they really need is a new business model. The problem is not the cars themselves (which are technology marvels), or even the availability of charging infrastructure (which is improving thanks to government largess). Unless two neglected factors—battery depreciation and power-grid management—are addressed, costly efforts at improving e-cars and charge spots will fail in the mass market.
First, while much attention has been paid to the appeal of electric cars to new buyers, an equally important question will be their appeal to used-car buyers. Here the major determinant is battery technology. Electric car batteries are extremely expensive—they can account for one-third of the cost of the vehicle—and offer limited driving range. A steady stream of expected advances means they will improve every year. This is good news, but only for those who haven't yet purchased an electric vehicle.
With electric cars, the most expensive part of the car is also the one that depreciates fastest. The usable life span of batteries (their ability to hold a charge degrades with use) and the pace of technology improvement (lower cost and greater range of newer batteries) reduce the relative value of used batteries and depress the resale proposition for used electric cars.
While some car buyers may give little thought to resale value, or plan on refurbishing their cars for many years, for mainstream buyers resale value is crucial: Lousy resale value means goodbye to the mainstream market. (Note to Tesla owners: You are not the mass market.)
Second, while intense public attention and investment have been focused on rolling out plug-in charge spots, these efforts have been decoupled from investment in the smart-grid technology needed to assure that power generation and distribution can actually support mass charging. As long as only a handful of drivers plug in each morning, the current grid will hold. But if 5% of cars in Los Angeles County were to plug in simultaneously, they could place a 750-megawatt load on California's already strained grid, equivalent to the generating capacity of two midsize power plants. Unless the power infrastructure challenge is addressed in advance, the very success of the electric car will drive its failure.
Solving the e-car puzzle won't happen unless private firms and governments consider the bigger picture when strategizing their investments. An intriguing example is the approach of Better Place LLC in Israel and Denmark, which applies the familiar cellphone model to its electric cars, selling multiyear contracts based on miles of driving (analogous to minutes) to finance their infrastructure investments and battery depreciation.
The Better Place approach is but one alternative. One thing is clear: The success of electric cars hinges on the successful alignment of the entire electric-car ecosystem. Uncoordinated investment in the individual pieces is a recipe for failure.
Mr. Adner is a professor of strategy at Dartmouth's Tuck School of Business and the author of "The Wide Lens: A New Strategy for Innovation" (Portfolio/Penguin, 2012).
Posted by MS at 12:14 AM