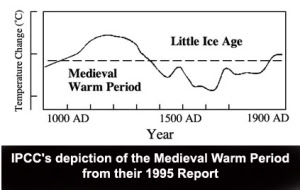 IPCC Presentation of the Medieval Warm Period from their 1995 Report
Unusually, Mann refused to disclose key calculations for his flat-handled, uptick-bladed graph thus blocking independent scientists from fully checking their reliability. However, it wasn’t long before Michael Mann’s published work was falsified by McIntyre & McKittrick. McIntyre also destroyed Mann08, in which Mann used the Tiljander proxy – known to be corrupted [2.] 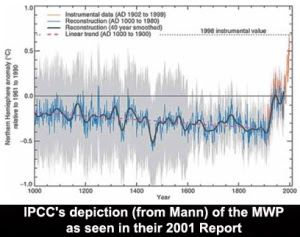 IPCC Replacement Presentation – Mann’s Version of the MWP (2001)
Retired Canadian statistician, Steve McIntyre and Ross McKitrick, an economics professor at the University of Guelph (M&M) thus came to the fore as the key critics of Mann’s methodology. Together they uncovered fatal flaws in both Mann’s statistical analysis and data interpretation. In 2005 this led M&M to publish a paper explaining the problems in Geophysical Research Letters.What was proven was that Mann’s methodology would generate a hockey stick regardless of almost any data input. This was because Mann numbers had been generating “Spectral noise,” One satirist, “Iowahawk” provided a primer on how to create a hockey stick at home, using a standard spreadsheet program.
Defenders of Mann claim that even if there are problems with his method or data set independent results from other researchers back him up. But as Andrew Montford’s ‘Caspar and Jesus’ study demonstrates, those third party statistical efforts to vindicate Mann actually raise more questions than they answer. But so much focus has been on Mann that his co-author of the hockey stick graph, Keith Briffa has managed to evade the same level of scrutiny. But as
McIntyre showed, Briffa was no less culpable. Briffa had claimed to have independent Eurasian tree-ring analysis that confirmed Mann’s results. But what he offered from the Polar Urals and Eurasian data from Yamal led to even greater suspicion because leaked Climategate emails proved Briffa’s claims about these were unreliable. Emails proved Briffa had been telling one story in public but another privately. A criminal prosecution was only averted due a technicality over the statute of limitations. British Information Commissioner’s Office (ICO) confirmed that the UK’s University of East Anglia at the center of Climategate scandal had indeed  unlawfully withheld and/or destroyed data. Further McIntyre examinations proved thatBriffa’s Polar Urals update would not show a hockey stick shape graph at all.
Absent a full release of all the evidence (which governments and university authorities appear not to want) the evidence in the public domain points to a clique of climatologists that conspired to cherry-pick tree ring data. It appears their purpose was to be bolster “evidence” for their belief of unprecedented warmth in our modern era due to human emissions of carbon dioxide.
Briffa and others secretly accepted that the data from modern tree ring analysis showed a poor match with temperatures. So if there is was poor reliability when compared with modern temperatures it is reasonable to infer that any conclusions drawn from them before the pre-thermometer era would also be unreliable.
What this means is that there is no persuasive proxy evidence from trees to substantiate Mann’s hockey stick graph – more precisely – there is no blade to Mann’s stick.
Conclusion
What does this all mean? For certain, bristlecone pines and larches are not accurate thermometers. Also, climatologists who persist in hiding their statistical data from independent review should no longer be given the benefit of the doubt and their findings should be treated with extreme caution.
If the British Columbia Supreme Court rules against Michael Mann and in favor of Tim Ball then there is a strong likelihood that Mann’s conduct in the tree ring controversy was malevolent. As such, it becomes increasingly likely he and others will face criminal investigation.
[1.] McDougall v. Black & Decker Canada, Inc.; 2008 ABCA 353; October 2008
[2.] McIntyre, S., McKitrick, The M&M Project: Replication Analysis of the Mann et al. Hockey Stick; (accessed online: July 25, 2012)

See also Steve Goddard's History of how the hockey stick was manufactured
Posted by MS at 10:44 AM