In a post today, materials physicist Charles Anderson PhD explains why the basis of climate alarm, back-radiation and the Trenberth Earth energy budget, are fallacies. Basic physical calculations show that if the Trenberth budget was correct, the average temperature of the Earth would be much warmer than observations.

[Notations in red were added by me]


The usual greenhouse gas calculation such as is offered up by the various Trenberth diagrams is highly dominated by the radiative transport of energy in the Earth’s atmosphere.  It leads to an unreasonable result for the situation I am going to describe here.

But first, my approach to the back-radiation problem was always to show that it was unrealistic on many levels.  One cannot make a net gain of heat energy in a surface by returning a portion of the energy lost from a surface to it.  This is especially true of any process that is said to lose half of the surface emitted energy to space immediately and to only re-absorb some part of half of the energy that was returned to the surface.  I went further and explained that only a small fraction of the energy emitted as radiation from the surface was re-emitted as radiation from an absorbing water or CO2 molecule.  With just these considerations alone, the upper limit on once radiated energy from the surface which is re-absorbed by the surface would be:

(0.5) f,   [half of the radiation from greenhouse gases is radiated toward Earth and half to space]

So at this point, the upper limit on IR radiation emitted from the surface which can be returned to the surface and absorbed by it is about:

But, it does not follow that simply because this much back-radiated IR is incident upon the surface that it will be absorbed by the surface.  During the roughly 8 hours of a day when the surface is warming under increasing sunlight and with a 2-hour lag for warming the ground, water, or air in a vicinity, none of this radiation may be absorbed, except when a cloud casts a shadow on a part of the area or at such points under the shadow of a tree of some such object.  The absorbing ground has to be cooler than the ground from which the photon was emitted and subsequently absorbed by an IR-absorbing molecule in the atmosphere.  During the remaining cooling hours of the day, roughly 16 hours, the surface is more likely to absorb such back-radiated energy.  As a mean value for re-absorption of IR back-radiation, you have claimed the figure of 0.95, which I have seen claimed by others.  I believe that value is much too high.

Let us look at one of the Kiehl-Trenberth energy budgets for a moment: 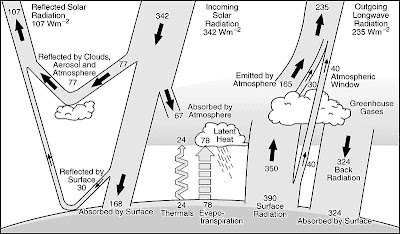 Now let us consider a midday calculation of the surface and do so where there is no cloud cover and where it is so dry that there is no evapotranspiration.  What kind of surface temperature will we have.  Since there are no clouds and I think clouds are the better part of the summed cloud and aerosol effect, let us assume the aerosol effect alone is 0.08.  The midday radiation incident on the upper atmosphere is 1367 W/m^2.  Note that at midday, the incident radiation path length through the atmosphere is shorter than it is for the average daily values normally used, so losses in the atmosphere should be lower than these numbers.  I will use them nonetheless.

The radiation upon the ground is then:

The ground temperature is then found from:

But if you believe that the upper limit amount of back-radiation is 95% absorbed by the surface, then the incident radiation is:

Now this is clearly much too hot and implies that even the addition of this upper limit of back-radiation which is much smaller than the back-radiation in the Kiehl-Trenberth diagram and energy budget is not physical.

Note that I did not follow the Kiehl-Trenberth diagram in subtracting the emitted radiation that corresponds to the Earth’s surface temperature.  They subtract 390 W/m^2 and add back in 324 W/m^2 of back-radiation for their mean daily calculation.  This would imply that if we had no atmosphere with IR absorbing gases in it, then there would be no back-radiation, so the total energy budget would look like:

which is nonsense.  Of course you might say that the thermals would be different and if I have no absorbing IR gases, then I certainly do not have water evaporation and movement.  This perhaps is a muddled situation.

So let us consider the equivalent calculation technique for an isolated black body radiator in space with incident energy flux of Ii and an emitted radiation of Ie.  But Ii = Ie, so then this approach would have us fallaciously conclude that

The temperature of the body is determined by the incident radiation on it.  The basic approach of the Kiehl-Trenberth diagram to radiation is nonsense.  The energy budget is a farce based on bad physics.  Indeed, when challenged on this issue, many proponents of man-made catastrophic global warming back down and say that the General Circulation Models are calculated primarily as air and water vapor circulation models and are not really consistent with the several variations of the Kiehl-Trenberth Energy Budget.  Yet it is such fallacious budgets that the public has been fed as the basis for the claim that there are substantial effects on the Earth's surface temperature due to man's emissions of CO2.  Government websites have been full of these energy budgets, as have college classes.  For their part, the range of results in the GCM computer models is too large to be consistent with the idea that climate science is settled and everyone agrees that it is understood.