Two-thirds, or 66%, of those surveyed last year said they aren't sure global warming is happening and 10% said they don't believe it's occurring.


According to the report cited in this US Today article, "Generation X is the most scientifically literate and best educated generation in American history." Could that be the reason they don't buy the junk science of "man-made" global warming?

Updated 14m ago
Amid a summer of record-setting heat [in the US only], a new survey finds that most of Generation X 's young and middle-age adults are uninformed and unconcerned about climate change. 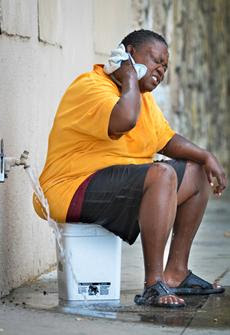 CAPTION
By John Walker, The Fresno Bee, via AP
Only about 5% of Gen Xers, now 32 to 52 years old, are "alarmed" and 18% "concerned" about climate change, reports the University of Michigan's Institute for Social Research on Tuesday. Two-thirds, or 66%, of those surveyed last year said they aren't sure global warming is happening and 10% said they don't believe it's occurring.

"Most Generation Xers are surprisingly disengaged, dismissive or doubtful about whether global climate change is happening and they don't spend much time worrying about it," said author Jon D. Miller.

The report comes as several Obama administration officials have recently linked extreme weather to climate change. In a report last week, the National Oceanic and Atmospheric Administration cited six weather events last year and said that atmospheric changes caused by the burning of fossil fuels made Texas' heat wave, for example, 20 times more likely than it would have been in the 1960s.

The Generation X survey of about 3,000 adults, the fourth in a continuing series, found a small but statistically significant decline in Gen Xer's attention to climate change. In 2011, 16% said they followed the issue very or moderately closely, down from 22% in 2009.

Why are Gen Xers so lukewarm? The report, funded by the National Science Foundation, cites climate change's complexity, pressing economic concerns and "issue fatigue." It finds educated adults tend to be more concerned about the issue. It also finds partisan differences; nearly half of liberal Democrats were concerned or alarmed compared to zero percent of conservative Republicans.

Miller said he expected that, given climate change's expected impact on future generations, parents of young children would be more concerned than those without kids.

"Not so," he said. "Generation X adults without minor children were slightly more alarmed about climate change than were parents. The difference is small, but it is in the opposite direction than we expected." Miller said the report suggests that while there's broad awareness of climate change, many Gen Xers prefer to focus on more immediate issues such as jobs and schools.
Posted by MS at 10:21 AM