Why the scientific basis of greenhouse gas warming is incorrect

Greenhouse theory calculations are based on the assumption that the atmosphere radiates like an ideal black-body. However, the gases in the atmosphere do not have available a continuum of quantum transitions that are necessary for black-body absorption or emission. If the atmosphere resembled a black-body, the radiation spectrum would follow an ideal Planck curve as shown on the right side of the graph below, and emissivity ε would = 1. This is what the IPCC and climate models assume, leading to an exaggeration of heat input 50 times greater than alleged anthropogenic global warming. Observations show the atmosphere is far from an ideal black-body radiator, therefore emissivity ε < 1 [ε =0.76 according to the APS], and greenhouse gas warming is much less than assumed.

A comment on this site from a heat transfer engineer:


In this APS publication, the authors point out that to get energy balance, you must reduce lower atmosphere emissivity ε from 1, used by the IPCC, to 0.76. This means the models exaggerate heat input by 333[1-0.76]=80 W/m^2 or 50 times calculated AGW! [333 is the assumed value of so-called 'back-radiation"]

This corresponds to increasing IR by 350%, the cause of the imaginary feedback. There are many other serious faults in this pseudo-science. No climate models can predict climate.

A post from heat-transfer expert Dr. Jinan Cao explains this and other fundamental problems of the greenhouse theory in greater detail:

Why the scientific basis of greenhouse gas warming is incorrect

Late Prof. Richard Schwartz was an astrophysicist, and had his article entitled “An Astrophysicist Looks at Global Warming” published posthumously by the Geophysical Society of America in GSA Today, 22(1), 44-45 (January 2012). Schwartz demanded in the article “most important, contrarians must show why the scientific basis of greenhouse gas warming is incorrect.”

This question does deserve an answer. Let’s answer the question by addressing what Schwartz considered the scientific basis of greenhouse gas warming was.

where, r, is radius of the Earth, and T earth’s mean surface temperature; α is albedo and S0 is the solar constant representing the incoming solar radiation energy per unit area and unit time with its value being around 1368 W/m2; σ is the Stefan-Boltzmann constant equal to 5.670373 x 10-8 (W/m2K4), and ε is the emissivity of the earth surface. [and p is pi]

In current climate research, ε is either missing in the equation or is assumed to be unit. Inserting the value of α = 0.3 and ε = 1 into and rearranging Eq. (1) leads to:

On the other hand, the Earth’s mean near-surface air temperature, as measured by global weather stations, is around 15°C (@ 288K). Another widely spread technical error is to use this 15°C to subtract the -18°C.

To explain why, it is essential to decode highly symbolised notions “surface” and “surface temperature T” of the Stefan-Boltzmann law to extract true physical meanings for the case of earth-atmosphere system. 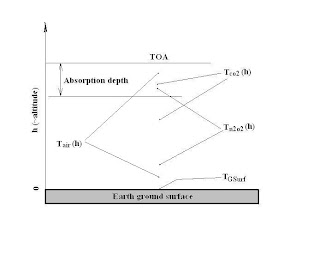 The global mean surface temperature 15°C is measured by weather stations using thermometers, and can be denoted Tair(h). Obviously, Tair(h) is the mean temperature of Tn2o2(h), Tco2(h) and temperature of water vapour etc., averaged in terms of heat capacity. As such the 15°C is largely of the temperature of nitrogen and oxygen gases that consist of 99% dry air. Therefore, it is not physically meaningful to subtract -18°C from this 15°C.

In calculation of Mars planetary mean temperature using the Stefan-Boltzmann equation, climate scientists made the same error as they did in calculation of the earth mean temperature, i.e. they falsely assumed the Mars has a black-body surface. If this error is corrected, one obtains the mean surface temperature for Mars -47.13°C, which is in agreement with measurements -47°C. http://www.ucar.edu/learn/1_1_2_1t.htm

When there is a net heating source on a planet, we’ll not be able to calculate its planetary mean temperature any more from radiative equilibrium. For example, the incoming radiation energy for the Sun is almost 0, while its outgoing radiation energy is still εσT4, with ε @ 1 and T = 5778 K, which is a result of its energy generation due to nuclear fusion of hydrogen nuclei into helium.

Venus has almost same temperature day and night in spite of the fact that a venusian day is as long as 243 earthly days. This is an indication that there are heat generating sources, most likely magma covering generated by volcanoes on the Venus.

Clearly, how to apply and interpret the Stefan-Boltzmann’s law is the problem that has led to a misunderstanding of the greenhouse gas warming effect.

“When a greenhouse molecule absorbs an infrared photon, the molecule rotates or vibrates faster and is said to be in an “excited” state. At low gas densities, an excited greenhouse gas molecule will spontaneously (by the rules of quantum mechanics) reradiate an infrared photon, which may escape the atmosphere into space and produce no net warming. “At the higher densities of Earth’s atmosphere, the excited molecule will bump into (collide with) another molecule (any molecule in the atmosphere). In the collision, the energized greenhouse gas molecule loses its rotational energy, which is transferred to the kinetic energy of the molecule it collides with (this is called collisional de-excitation). The increased kinetic energies of the colliding molecules means that the molecules are moving faster than they were prior to the collision, and the increased velocities of such molecules represents a direct measure of increased atmospheric temperature. “’Greenhouse gas’ warming occurs because the collisional de-excitation time for greenhouse molecules in Earth’s lower atmosphere is much shorter than the radiation lifetime of excited molecular states. This is the basic science of greenhouse gas warming.”


A paper by Prof. Pierrehumbert (Pierrehumbert, R.T., 2011, Infrared radiation and planetary temperature: Physics Today, v.64, p.33–38.) specifies radiation lifetime ranging from a few milli-seconds to a few tenth of a second, and collisional time 10-7 s, implying that the thermal transfer process between N2O2 and CO2/H2O by molecular collisions is far faster than the heat loss/gain by radiation for CO2/H2O.

Unfortunately, wrong physics has been employed to explain the thermal absorption and in particular emission phenomena of radiative gases. De-excitation occurs only after excitation; however, emission occurs 24/7 to a non-white/transparent object as long as temperature of the object is not 0 K (-273.15°C), regardless whether it absorbs or not.

The kinetics of heat transfer by radiation is determined by the equation εσT4 (or I = a I0) that measures the heat energy gained/lost per unit area and unit time for an object. Assuming the total surface area, S, mass, M, and specific heat capacity, cp, for the object, one can readily convert absorption/emission energy to temperature rise/drop for the object. The emission rate will be 1012 times faster at 1000 K than that at 1 K. On the other hand, the collision time of 10-7 s, which is related to the mean free path of air molecules, does not mean that air homogenizes its temperature in 10-7 s time scale. In fact air is a thermal insulator because thermal transfer for air by molecular collision is slow. Industrial examples of taking advantage of air’s thermal insulation property include: double glass windows for trains and hollow synthetic fibres etc.

Hopefully, this article is comprehensive enough and does answer late Schwartz’s question.
Posted by MS at 2:53 PM