July 9, 2012 By Eric Eisenhammer 10 Comments
On the afternoon the state budget was signed into law last Wednesday I received an email from a local activist informing me that hidden in a trailer bill titled SB 1018 was a provision exempting the upcoming cap and trade auction from open meeting rules. 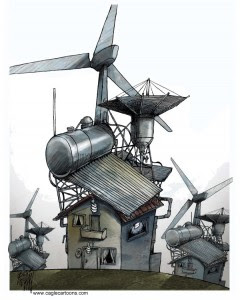 CARB formed a company called Western Climate Initiative Inc. (WCI), to manage its upcoming cap and trade auction.  This shadowy corporation, registered in Delaware, will be responsible for imposing billions in hidden energy taxes on California ratepayers and small businesses without public scrutiny or accountability.
SB 1018 was a “gut and amend” bill, with over 100 pages inserted the day before the bill was signed into law along with the state budget.  This legislation did not go through one committee hearing and most legislators probably never had a chance to read it.  But buried in this bill in Section 12894(b)(2) is a line exempting WCI from a critical provision of the California Constitution, known as the Bagley-Keene Act, which provides meetings be open to public scrutiny.
Small business owners and citizen energy consumers care about protecting the environment, but CARB continually behaves as if it has something to hide.
The organization I lead, called the Coalition of Energy Users, or CEU, has over 5,000 supporters, 40% of whom are small business owners and almost all of whom are California energy consumers.  However, when a bill is jammed through in the way SB 1018 was, consumer and small business advocates get shut out of the process because nobody can analyze and respond to the proposal before it is too late.  Unfortunately, that’s exactly the point.
Good government proponents first expressed concern about transparency when CARB registered WCI in Delaware, a state not subject to California’s open meeting laws.  Shielded from accountability laws, the cap and trade auction will be managed by international financial firms [like Deutsche Bank and Markit North America – which doesn’t even have an office in California] and will be open to Wall Street traders and speculators who will profit while we all pay the bill.  The auction will be vulnerable to market manipulation like the kind that led to the recent energy and mortgage crises.
CARB Chairman Mary Nichols likes to tout her agency as a national and even global trendsetter.  However, just a few weeks ago she abruptly shut down public comments when regular citizens and small business owners showed up to express opposing points of view.  She has also refused to respond to inquiries by the Congressional Government Oversight Committee.
Californians are tired of seeing quality blue collar jobs flee our state and already pay some of the nation’s highest gas and electricity costs.  While we all want to do our part for the environment, the cap and trade auction just imposes billions of dollars in new costs without guaranteeing either cost effectiveness or environmental benefit.
Citizen energy consumers and small business owners deserve to have a voice, especially in a process seeking to impose billions in new energy taxes on us all.
(Eric Eisenhammer is the Founder of the Coalition of Energy Users and Board Member of Friends for Saving California Jobs. Originally posted on Fox & Hounds.)
Posted by MS at 3:59 PM