Why the claims by propaganda sites such as Skeptical Science of "one Hiroshima bomb every four seconds" alleged human impact on climate are lies, and why Trenberth's "missing heat" is not going into the oceans. 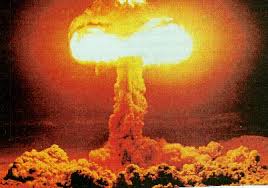 The comparison between the alleged destruction caused by (Anthropogenic Global Warming) AGW and the atomic bomb dropped at Hiroshima was first raised by professor of geology Mike Sandiford. Sandiford compares the human effect on the environment to the atomic bomb:

To put these numbers into a more human context we need a new measure for our energy use. The “Hiro” is one. It is the equivalent to the energy released by detonating one Hiroshima “Little Boy” bomb every second. One Hiro equals 60 trillion watts. In these terms, our human energy system operates at a rate of 0.25 Hiros, or one Hiroshima bomb every four seconds. That is the equivalent of more than eight million Hiroshima bombs going off each year.

Such is the insignificance of the energy impact of humans on the Earth’s system that if humanity were to disappear tomorrow all traces of our energy would be gone in a geological blink of an eye.

However Sandiford’s insidious metaphor has been picked up by another academic with even less pretension to expertise in the field of AGW. This time the Ivory Tower has let loose one David Holmes, a lecturer in communications, whatever that is.

Holmes outdoes Sandiford because now humanity is letting off FOUR Hiroshima atomic bombs every second. Not one but four!

As a taxpayer are you getting annoyed yet?

Holmes continues by saying all these Hiroshimas, Hiros for short, are going into the oceans which is accumulating heat or energy or Joules or something at the usual rate leading to the destruction of all life on Earth as we know it; in short the usual hysterical alarmism from AGW acolytes.

Holmes’ article is the usual garbage tip of scary images and smokestacks billowing out black smoke. If these people were not causing witless governments of all persuasions to waste billions this would be hilarious. But they are causing the wastage of billions so hilarious this is not.

To go through each and every one of the canards dribbled out by Holmes the communicator would give unmerited dignity to this dreck and anyway it has all been done before with posts by me and cohenite at this site.

Eschenbach concludes after deducting the energy going out of the ocean from that going in:

On average, little energy is going into the ocean, only two-tenths of a watt per square metre. In a world where the 24/7 average downwelling energy is about half a kilowatt per square metre, that’s tiny, lost in the noise. Nor does it portend much heating “in the pipeline”, whatever that may mean.

The second is that neither the average forcing, nor the trend in that forcing, are significantly different from zero. It’s somewhat of a surprise.

Eschenbach of course will often be surprised since he is a scientist. One feels that academics like Sandiford and Holmes will never be surprised because they are ideologues whose minds are made up.

The second deception Holmes makes is to ignore what the real world is telling us about heat in the oceans. As David Evans explains that data is showing little heating of the oceans. As well sea surface temperatures are declining: 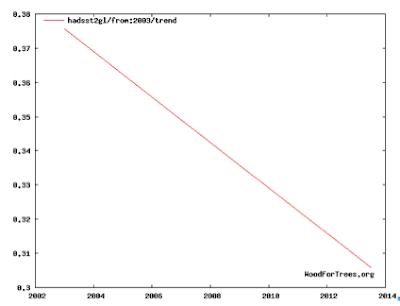 The salient point about this is if the ocean surface is cooling how can heat be moving past the surface and going to the ocean depths? The leading expert [sic] from the AGW coterie of scientists, Trenberth, in his paper on ocean warming says heat misses the surface and moves deeper due to increasing wind variability [see paragraph 1]. Has the wind variability been increasing? 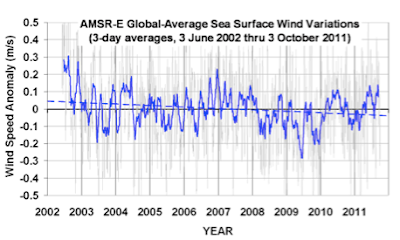 So Holmes doesn’t know what he is talking about. He is merely a propagandist. So many academics are like Holmes. They use the imprimatur of their academic position to give weight to their ideological beliefs. Australia has not been well served by its tax-payer funded intelligentsia on the issue of AGW.
Posted by MS at 9:35 AM