WSJ.COM 8/30/13: It is difficult to comprehend the hysteria about overpopulation that once gripped America. In 1965, the New Republic, one of America's foremost journals of public affairs, wrote that "world population has passed food supply. The famine has started." The magazine was so convinced of the coming cataclysm that it proclaimed world hunger to be the "single most important fact in the final third of the 20th century." This period, in which large portions of America's intellectual and political elites took leave of their senses and predicted something like the literal end of civilization, is the subject of Paul Sabin's brief, but valuable, book "The Bet: Paul Ehrlich, Julian Simon, and Our Gamble Over Earth's Future." 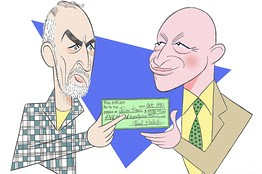 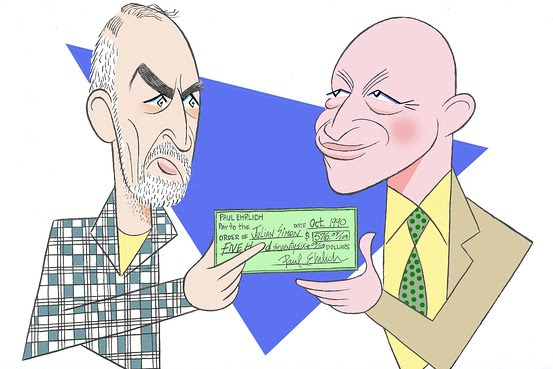 Ken Fallin
Mr. Ehrlich, a biologist specializing in butterflies, became famous in the 1970s after publishing "The Population Bomb" (1968), in which he updated the 19th-century projections of Thomas Malthus—people were overbreeding, the supply of food and resources couldn't possibly keep up—and dialed the calamity to 11. Within a few short years, hundreds of millions of people would starve to death as civilization unraveled. Or so predicted Mr. Ehrlich. "The Population Bomb" was reprinted 22 times in the first three years alone, and its author would appear as Johnny Carson's guest on "The Tonight Show" at least 20 times, becoming a national figure and an influential player in Democratic politics. Mr. Ehrlich's ideas attracted a remarkable number of passionate adherents. They also attracted the scornful criticism of a little-known economist named Julian Simon.
When he began exploring demographics, Simon, too, had been concerned about overpopulation. But the more he studied the subject, the more he became convinced that Mr. Ehrlich's thesis was fundamentally flawed. Mr. Ehrlich believed that the laws of nature that governed insects also applied to humans, that natural constraints created cycles of population booms and busts. Simon believed that man's rational powers—and the economies man constructed—made those laws nearly obsolete.
So in 1980 Simon made Mr. Ehrlich a bet. If Mr. Ehrlich's predictions about overpopulation and the depletion of resources were correct, Simon said, then over the next decade the prices of commodities would rise as they became more scarce. Simon contended that, because markets spur innovation and create efficiencies, commodity prices would fall. He proposed that each party put up $1,000 to purchase a basket of five commodities. If the prices of these went down, Mr. Ehrlich would pay Simon the difference between the 1980 and 1990 prices. If the prices went up, Simon would pay. This meant that Mr. Ehrlich's exposure was limited while Simon's was theoretically infinite.
Simon even allowed Mr. Ehrlich to rig the terms of the bet in his favor: Mr. Ehrlich was allowed to select the five commodities that would be the yardstick. Consulting two colleagues, John Holdren and John Harte, Mr. Ehrlich chose chromium, copper, nickel, tin and tungsten, each of which his team supposed was especially likely to become scarce. As they settled on their terms, Mr. Sabin notes, Messrs. Ehrlich, Holdren and Harte "felt confident that they would prevail."
They didn't. In October 1990, Mr. Ehrlich mailed a check for $576.07 to Simon. Mr. Sabin diplomatically reports that "there was no note." Although world population had increased by 800 million during the term of the wager, the prices for the five metals had decreased by more than 50%. And they did so for precisely the reasons Simon predicted—technological innovation and conservation spurred on by the market.
Mr. Ehrlich was more than a sore loser. In 1995, he told this paper: "If Simon disappeared from the face of the Earth, that would be great for humanity." (Simon would die in 1998.) This comment wasn't out of character. "The Bet" is filled chockablock with Mr. Ehrlich's outbursts—calling those who disagree with him "idiots," "fools," "morons," "clowns" and worse. His righteous zeal is matched by both his viciousness in disagreement and his utter imperviousness to contrary evidence. For example, he has criticized the scientists behind the historic Green Revolution in agriculture—men like Norman Borlaug, who fed poor people the world over through the creation of scientific farming—as "narrow-minded colleagues who are proposing idiotic panaceas to solve the food problem."
Mr. Sabin's portrait of Mr. Ehrlich suggests that he is among the more pernicious figures in the last century of American public life. As Mr. Sabin shows, he pushed an authoritarian vision of America, proposing "luxury taxes" on items such as diapers and bottles and refusing to rule out the use of coercive force in order to prevent Americans from having children. In many ways, Mr. Ehrlich was an early instigator of the worst aspects of America's culture wars. This picture is all the more damning because Mr. Sabin paints it not with malice but with sympathy. A history professor at Yale, Mr. Sabin shares Mr. Ehrlich's devotion to environmentalism. Yet this affinity doesn't prevent Mr. Sabin from being clear-eyed.
At heart, "The Bet" is about not just a conflict of men; it is about a conflict of disciplines, pitting ecologists against economists. Mr. Sabin cautiously posits that neither side has been completely vindicated by the events of the past 40 years. But this may be charity on his part: While not everything Simon predicted has come to pass, in the main he has been vindicated. As Nobel Prize-winning economist Robert Solow put it, "the world has been exhausting its exhaustible resources since the first cave-man chipped a flint."
Mr. Ehrlich may have been defeated in the wager, but he has continued to flourish in the public realm. The great mystery left unsolved by "The Bet" is why Paul Ehrlich and his confederates have paid so small a price for their mistakes. And perhaps even been rewarded for them. In 1990, just as Mr. Ehrlich was mailing his check to Simon, the MacArthur Foundation awarded him one of its "genius" grants. And 20 years later his partner in the wager, John Holdren, was appointed by President Obama to be director of the White House Office of Science and Technology Policy.
—Mr. Last is a senior writer at the Weekly Standard and the author of "What to Expect When No One's Expecting."
Posted by MS at 4:40 PM