How the government claims almost everybody can have a 'green job'

Under the Obama administration's very loose requirements for padding the numbers of 'green jobs,' any mechanic who learns how to install a low-flow toilet has by definition a 'green job.'

Green Jobs Are Plentiful In Washington — If You Define Them Loosely

Enlarge
Mike Mitzel took part in green jobs training in Washington, which was funded by the 2009 Recovery Act. He now works as a maintenance mechanic for the University of Washington’s Consolidated Laundry Facility. | credit: Ashley Ahearn | rollover image for more

SEATTLE, Wash. — Hearing the term “green jobs” brings to mind images of people installing solar panels or constructing wind turbines.
Not maintaining laundry machinery, which is what Mike Mitzel does for a living.
Mitzel is an alum of the green jobs training initiative. He now works as a maintenance mechanic for the University of Washington’s Consolidated Laundry Facility.
Mitzel has plenty of company in those green-job-training graduate ranks; in 2009 President Obama signed into law the American Recovery and Reinvestment Act, providing $500 million for research and green jobs training. In Washington, $16 million went to green jobs training. 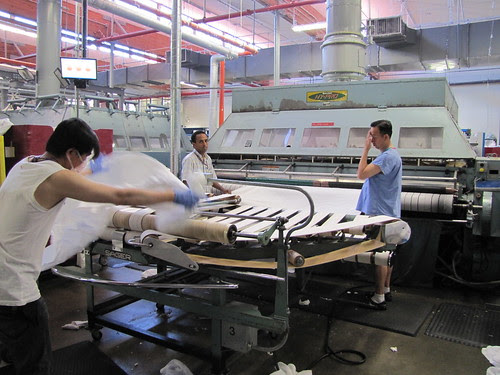 (Workers at the UW’s Consolidated Laundry Facility. Photo: Ashley Ahearn)
Mitzel’s facility cleans 40,000 pounds of laundry a day – 14 million pounds every year.
“We just have to keep the show going, the show must keep going no matter what,” Mitzel says on a recent tour of the facility.
Mitzel walks quickly past giant washing machines, 600-pound dryers, long conveyor belts moving sheets and blankets through irons and presses.
He pauses to reach his arm into a giant ironing machine and fish out a tangled sheet.
“Until we take care of this the machine won’t work,” he says, sweat beading on his forehead amidst the churning machine and hot laundry.

“I think any time you can make and maintain a thing and keep it operating, it’s good for everyone. It’s all green as far as I’m concerned.”

But Mitzel didn’t go looking for a “green” job. He just needed work.
Mitzel has years of experience in building maintenance but was unemployed, off and on, during the height of the recession. That’s when he took classes in building operations and lighting efficiency that were funded by the green jobs initiative.
He says he got a lot out of the green jobs training classes he took and wants to apply some of the knowledge to his current job. He plans to research low-flow toilets and more efficient lighting systems for this facility.
Mitzel’s job is indeed green, according to Alan Hardcastle, a senior researcher with Washington State University’s Energy Program and an expert on green jobs.
“I would say his (Mitzel’s) is actually a good example of a job that most people would think isn’t green but that in fact because of his actions and the work that he’s doing does contribute to a green economy.” 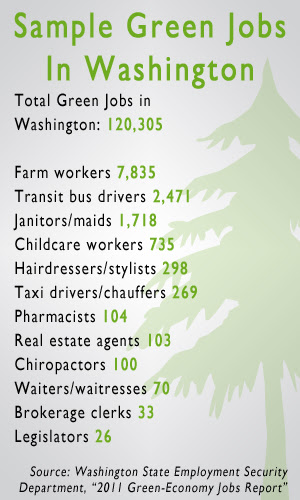 In 2011 Hardcastle helped put together a survey to tally up how many occupations fall into the “green jobs” bucket in this state. The answer: more than 120,000 jobs.
Some of the occupations on the list aren’t what you might immediately describe as a green job. The list of jobs includes fire fighters, plumbers and loggers, to name a few.
“Many common jobs are becoming more green by virtue of how the work is done - not just products that are produced,” Hardcastle explains.
So, according to Hardcastle, a logger may be practicing more sustainable forestry. A plumber might be using different equipment or recycling materials. Or a guy like Mike Mitzel who is now looking for ways to make his laundry facility more energy- and water-efficient. Those are all examples of what Hardcastle and others call a “green job.”
And that definition has some traction in the environmental community.
Jessica Finn-Coven is with the environmental nonprofit Climate Solutions, in Seattle. She says Climate Solutions agrees with Hardcastle’s statements. Climate Solutions was involved in the green jobs initiative, although it did not get any federal grant money.

“Almost any job, almost any occupation can be greened,” Finn-Coven says. “What we need to do to reduce our pollution involves a lot of our traditional work and doing it in a more environmentally sustainable manner.”

The $16 million in federal dollars that were spent on green jobs training in Washington state went to fund seven different training grants. 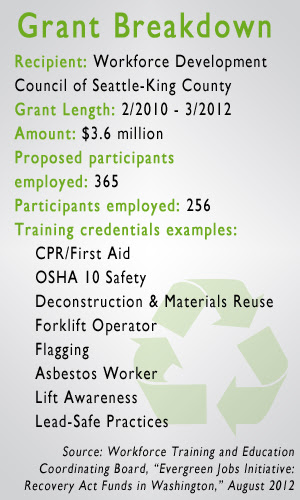 But here’s the thing: The federal money came without a requirement to verify if any of the jobs the trainees ended up getting or maintaining were specifically “green” – even under the broadest definition of the term.
“That type of research was not conducted on the outcomes of this money,” says Bryan Wilson, deputy director of the State Workforce Board, which received the largest federal green jobs training grant awarded to Washington state. Under that grant more than 70 percent of the trainees got jobs.
Here are the names of some of the training sessions the federal green jobs stimulus money paid for in Washington: “forklift operator,” “asbestos worker,” “lighting design,” “energy auditing” and “CPR/First Aid.”
Wilson says the trainings made the unemployed more employable, whether that was for a job that directly benefits the environment, or not.
“The top goal was to get people back to work,” he stresses. “In addition, these were monies for green jobs so there would be the additional benefit of helping our environment. But putting people back to work was the number one goal.”
As hard as it is to nail down what makes a job “green,” it’s perhaps even harder to quantify what kind of effect these trainings are having, big picture, on the green economy in Washington state.
But people like Mike Mitzel might provide some insight on that.
Sitting in the mechanic’s office at the back of the laundry facility above the roar of the machines, Mitzel says he likes his job and the stability it provides for him and his wife. But he used to run his own general contracting company and he wants to be his own boss again. He plans to start his own energy efficiency consulting business to help commercial building owners do things to save money on their utility bills.
Mitzel says he got the idea from the green jobs training he did.
“It just made me more aware and in tune with how to save energy and it really doesn’t take a whole lot to do it if you’re just aware,” he says.
Someday Mike Mitzel might be a green jobs creator himself. For now, he’s just glad to be working.
This story is part of The Big Reset, KUOW’s nine-part series that explores how the Puget Sound Region has emerged from the Great Recession.
Related:

Obama pads numbers of 'green jobs'
Now you tell us: LA Times: 'the windfall in green jobs...has always been a con job'

Prop 23 and the Green Jobs Myth

The Myth of Green Energy Jobs: The European Experience

Every job in UK wind farm industry is subsidized $157,000 per year

Obama's green jobs program costing over $11 million per job
Posted by MS at 8:47 AM