A Danish group that has reproduced the Earth's atmosphere in the laboratory has shown how clouds might be seeded by incoming cosmic rays. The team believes that the research provides evidence that fluctuations in the cosmic-ray flux caused by changes in solar activity could play a role in climate change. Other climate researchers, however, remain sceptical of the link between cosmic rays and climate. 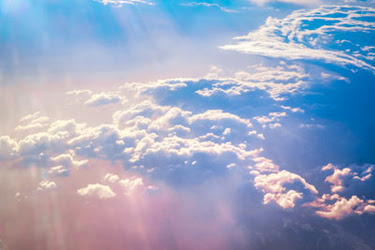 Is cloud formation affected by cosmic rays?
The conventional view of climate scientists, as expressed in the 2007 report of the Intergovernmental Panel on Climate Change, is that most of the warming of the Earth's surface over the last few decades is down to the atmospheric build-up of manmade greenhouse gases such as carbon dioxide. But Henrik Svensmark of the National Space Institute in Denmark believes that an effect related to the Sun's fluctuating magnetic fields may also play a major role in the warming.
For well over a decade Svensmark has studied how the energetic particles reaching Earth from deep space, known as cosmic rays, can influence the planet's climate as a result of changes to the Sun's output. The idea is that cosmic rays seed clouds by ionizing molecules in Earth's atmosphere that draw in other molecules to create the aerosols around which water vapour can condense to form cloud droplets. The low-lying clouds that result then have the effect of cooling the Earth by reflecting incoming sunshine back out to space. Since the Sun's magnetic field tends to deflect cosmic rays away from the Earth, the planet will be warmer when solar activity is high and, conversely, cooler when it is low.

In 1997 Svensmark backed up this idea with a study showing correlations between the distribution of clouds and cosmic-ray flux around the world, as measured by satellites and neutron counters, respectively. Although subsequent studies by other scientists suggest that no significant correlations exist, Svensmark stands by his claim. But in 2007 he and his colleagues at the National Space Institute provided an alternative line of evidence in support of their theory, carrying out controlled laboratory tests showing how ionizing radiation in the form of gamma rays could stimulate atmospheric molecules to clump together into aerosols.
The researchers then supported these findings with further results published in 2011, which showed that the ionizing effects of electrons from a particle accelerator were identical to those from the gamma rays, so allaying doubts about the suitability of the latter to serve as a surrogate for cosmic rays. Independent confirmation of cosmic rays' fecundity then came later that year, when the CLOUD collaboration at CERN in Geneva found that it could boost aerosol production at least 10-fold when it sent charged-pion beams through a 27 m3 artificial atmosphere.

Too small to form clouds

Those results were not, however, enough by themselves to prove that cosmic rays can indeed seed clouds. The particle clusters produced measured just a few nanometres across, whereas aerosols typically need to have a diameter of at least 50 nm in order to serve as so-called cloud condensation nuclei (CCN). In fact, there were theoretical grounds for thinking that such seeding would not be possible to any significant degree. Computer simulations carried out by Jeffrey Pierce of Dalhousie University in Canada and colleagues showed that competition for raw material in the atmosphere as well as merging mean that relatively few of the small aerosols brought about by ionization should go on to form CCNs.
The latest experiment was designed to find out whether – the results of this modelling notwithstanding – cosmic rays could in fact generate significant quantities of CCNs. To do so, Svensmark and colleagues measured the number and size of aerosols produced over extended periods – up to 36 hours – inside an 8 m3 stainless-steel chamber filled with varying concentrations of water vapour, ozone and sulphur dioxide. The chamber was exposed to ultraviolet radiation in order to stimulate production of sulphuric acid – one of the main components of atmospheric aerosols – as well as ionizing radiation from two caesium-137 gamma-ray sources, to mimic incoming cosmic rays.
First, the researchers carried out a control experiment in which they continually injected pre-made small aerosols into the chamber but kept the production of sulphuric acid – which is needed to feed the growing aerosols – constant, without ionization. As expected, there was not enough sulphuric acid to go around and hardly any clusters grew to more than 30–40 nm in diameter. But when the researchers let the clusters form of their own accord inside the chamber and switched on the ionization, the result was significant numbers of aerosols measuring at least 50 nm across – large enough to serve as CCNs.

In their paper reporting the results, the researchers point out that this growth of larger aerosols presumably requires the generation of fresh raw material inside the experiment. They suggest that, thanks to the ionization, "the charged clusters are producing additional sulphuric-acid molecules from reactions involving negative-ion chemistry of ozone, sulphur dioxide and water". Svensmark, however, described this proposed mechanism as just a "guess", and said that the group hopes to carry out a new round of experiments in order to identify the substance being produced. "This is something that needs to be investigated in more detail," he added, "but it is potentially an important piece in the puzzle of how cosmic rays affect cloud formation."
Others, however, remain to be convinced. Pierce, who carried out the earlier modelling work, described the result as "an extremely interesting and potentially important finding", but he questioned just how many CCNs could be produced in this way in the real atmosphere. "It is not clear", he said, "how much of an effect a 10% change in the cosmic-ray flux – which would occur from the solar minimum to the solar maximum – would affect sulphuric-acid production, CCN formation and clouds."
In fact, according to Gavin Schmidt of the NASA Goddard Institute for Space Studies in New York, proving the real-world applicability of its aerosol research is only one of several hurdles that the Danish group must overcome. Others, he says, relate to cloud properties, degree of radiative forcing and climate trends. "The researchers have a really long way to go before they can convince anyone that this is fundamental to climate change," he added.
There is also an experiment at CERN in Switzerland that is investigating the possible links between cosmic rays and clouds. In the video below, CERN's Jasper Kirby explains the aims of the CLOUD experiment, which mimics conditions in the Earth's atmosphere.


The research is reported in Physics Letters A.