A new paper published in Global Biogeochemical Cycles proposes large revisions to the ocean carbon cycle based upon observations and models, finding the global oceans act as a net source of CO2 to the atmosphere.

According to the authors, the flow ["flux"] of carbon from deep ocean layers ["obduction"] to the middle layer ["ML"] is 3-5 times greater than assumed previously and by the IPCC. The authors find middle-layer carbon flux toward the ocean surface exceeds flux to the ocean depths ["subduction"] by 11 Petagrams of carbon per year, which by comparison is significantly more carbon than generated by all man-made activities [8.8 Petagrams of carbon per year].

In other words, the deep oceans naturally contribute more carbon to the middle ocean layers [between 25-150 meters deep] than produced by all of man's activities combined.

The authors find the tropical and Southern oceans act as net sources of CO2, while the temperate NH & SH and high latitude oceans act as net sinks [see figure 5 below] and "Our results emphasis the strong sensitivity of the oceanic carbon cycle to changes in mixed-layer depth, ocean currents and wind," i.e. factors not incorporated in IPCC carbon cycle models.

The paper illustrates that IPCC carbon cycle assumptions may be highly erroneous by a factor of up to five times, how little is actually known with confidence about the global carbon cycle, and suggests that ocean outgassing is the primary reason for the increase of atmospheric CO2 levels, rather than mankind. 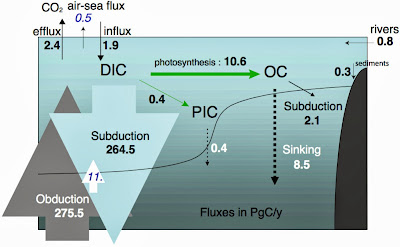 The new ocean carbon-cycle budget proposed by the paper. The net source of 0.5 Petagrams CO2 per year from the ocean to the atmosphere is shown in blue at the upper left. The "obduction" of carbon from the deep ocean to the middle layers exceeds flow from the middle to deep layers "subduction" by 11 Petagrams of carbon per year [shown by large arrows at left]. Note, the modelled fluxes in this illustration are from the pre-industrial period, however, due to Henry's Law, the net flux of CO2 from the ocean to atmosphere would be expected to be even higher than modelled here.

Figure 6. Mixed-layer carbon budget for the global ocean in the ORCA2-PISCES pre-industrial simulation. Thickness of the arrows are proportional to the values of the fluxes. The separation between subduction and obduction of DIC and between air-sea CO2 efflux and influx is based on the sign of the annual mean flux; it reflects differences in the direction of the annual flux at the regional scale; the net flux at the global scale is indicated with oblique blue characters. DIC: dissolved inorganic carbon, OC: dissolved and particulate organic carbon, PIC: particulate inorganic carbon (CaCO3). 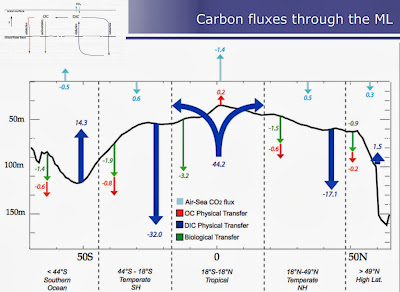 The flow of CO2 between the various oceans and the atmosphere is shown by the blue arrows at the top of this figure, e.g. the tropical oceans act as a net source of 1.4 Petagrams of carbon per year. Vertical axis shows flows at different ocean depths esp. the middle layer from ~25-150 meters deep.

Figure 5. Schematic of the main carbon transfers across the mixed-layer interface, averaged by latitude bands, including the air-sea CO2 flux, the physical transfer of organic carbon (OC), the physical transfer of DIC and the biological transfer (sedimentation) in the ORCA2- PISCES pre-industrial model simulation (except for the numbers in brackets which refer to the data-estimates, when available). The surface of the arrows (length thickness) are proportional to the fluxes. The black line shows the zonal annual mean mixed-layer depth from the climatology of de Boyer Mont egut et al. [2004].

Although they are key components of the surface ocean carbon budget, physical processes inducing carbon fluxes across the mixed-layer base, i.e. subduction and obduction, have received much less attention than biological processes. Using a global model analysis of the pre-industrial ocean, physical carbon fluxes are quantified and compared to the other carbon fluxes in and out of the surface mixed-layer, i.e. air-sea CO2 gas exchange and sedimentation of biogenic material. Model-based carbon obduction and subduction are evaluated against independent data-based estimates to the extent that was possible. We find that climatological physical fluxes of DIC are two orders of magnitude larger than the other carbon fluxes and vary over the globe at smaller spatial scale. At temperate latitudes, the subduction of DIC and to a much lesser extent (< 10 %) the sinking of particles maintain CO2 undersaturation, whereas DIC is obducted back to the surface in the tropical band (75%) and Southern Ocean (25%).At the global scale, these two large counter-balancing fluxes of DIC amount to +275.5 PgC y-1for the supply by obduction and -264.5 PgC y-1 for the removal by subduction which is ~ 3 to 5 times larger than previous estimates. Moreover, we find that subduction of organic carbon (dissolved and particulate) represents ~ 20% of the total export of organic carbon: at the global scale, we evaluate that, of the 11 PgC y–1 of organic material lost from the surface every year, 2.1 PgC y-1 are lost through subduction of organic carbon. Our results emphasis the strong sensitivity of the oceanic carbon cycle to changes in mixed-layer depth, ocean currents and wind.

Related:
New paper finds ocean along N. California coast is a net source of CO2 to the atmosphere

New paper finds the oceans are a net source of CO2

New paper finds another problem with global carbon-cycle models: plant respiration is 'as different as night and day'
Posted by MS at 7:17 PM