A new paper published in Atmospheric Research seeks a grand "unification" of climate modeling of moist convection, the primary means of cooling and heat in Earth's atmosphere. Contrary to the popular meme that climate is "settled basic physics," the authors,


"pointed out that currently there are two families of atmospheric models with quite different formulations of model physics, one represented by the general circulation models (GCMs) and the other by the cloud-resolving models (CRMs). Ideally, these two families of models should be unified so that a continuous transition of model physics from one kind to the other takes place as the resolution changes."

In other words, "quite different model physics" of convection are used in high-resolution models to simulate clouds vs. the over-simplified physics of convection utilized by low-resolution global general circulation models (GCMs). The IPCC uses GCMs to create its global warming projections, and thus it is not reassuring that the primary heat transfer mechanism in the troposphere - convection - is oversimplified in these models [and thus incorrect].

Like physicists trying to devise a "grand theory of unification" between the particle and macro worlds, this paper suggests some early steps to unify the "quite different model physics" of low-resolution GCM models and high-resolution cloud-resolving models [the latter with the more accurate physics].

Prior papers have demonstrated that GCMs models are unable to simulate conventional turbulent [convective] heat flow and thereby violate the 2nd law of thermodynamics, and that IPCC global climate models do not realistically simulate convection.

Convection is the most important cooling and heat transfer mechanism in the troposphere and overwhelms or "short-circuits" so-called radiative forcing. These three papers collectively demonstrate a current inability of GCMs to properly simulate convection and thus cooling and heat transfer in the troposphere. Therefore, unless or until these problems are resolved, the IPCC global climate models cannot provide realistic projections of future warming or cooling.

Multiscale modeling of the moist-convective atmosphere — A review

Multiscale modeling of the moist-convective atmosphere is reviewed with an emphasis on the recently proposed approaches of unified parameterization and Quasi-3D (Q3D) Multiscale Modeling Framework (MMF). The cumulus parameterization problem, which was introduced to represent the multiscale effects of moist convection, has been one of the central issues in atmospheric modeling. After a review of the history of cumulus parameterization, it is pointed out that currently there are two families of atmospheric models with quite different formulations of model physics, one represented by the general circulation models (GCMs) and the other by the cloud-resolving models (CRMs). Ideally, these two families of models should be unified so that a continuous transition of model physics from one kind to the other takes place as the resolution changes. This paper discusses two possible routes to achieve the unification. ROUTE I unifies the cumulus parameterization in conventional GCMs and the cloud microphysics parameterization in CRMs. A key to construct such a unified parameterization is to reformulate the vertical eddy transport due to subgrid-scale moist convection in such a way that it vanishes when the resolution is sufficiently high. A preliminary design of the unified parameterization is presented with supporting evidence for its validity. ROUTE II for the unification follows the MMF approach based on a coupled GCM/CRM, originally known as the “super-parameterization”. The Q3D MMF is an attempt to broaden the applicability of the super-parameterization without necessarily using a fully three-dimensional CRM. This is accomplished using a network of cloud-resolving grids with gaps. The basic Q3D algorithm and highlights of preliminary results are reviewed. It is suggested that the hierarchy of future global models should form a “Multiscale Modeling Network (MMN)”, which combines these two routes. With this network, the horizontal resolution of the dynamics core and that of the physical processes can be individually and freely chosen without changing the formulation of model physics. Development of such a network will represent a new phase of the history of numerical modeling of the atmosphere that can be characterized by the keyword “unification”.
...
[full paper available here] 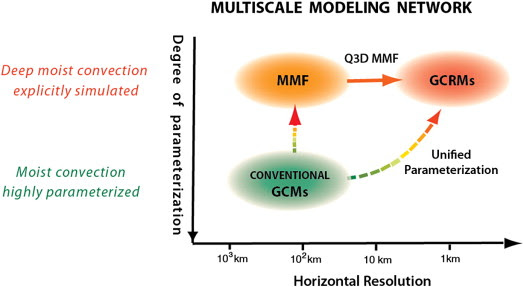 Multiscale modeling network that consists of the unified parameterization, the Q3D MMF, and a link between the two.

Fig. 29 illustrates the history of numerical modeling of the atmosphere. The period of 1950s, which can be characterized by “Victory of Simplification”, began with the first successful numerical weather prediction (NWP) by Charney et al. (1950) using an equivalent-barotropic quasi-geostrophic model. The period from the 1960s through 2000s, which can be characterized by “Expansion of the Scope and Diversity”, began with the development of the early GCMs. A number of numerical models are subsequently developed for different scales. From the 2000s to present, there is a tendency toward “Unification” of these models. The approaches of MMF and MMN reviewed in this paper expand the unification all the way from GCMs to CRMs as shown by the red bracket in the figure.

Illustration of the history of numerical modeling of the atmosphere.