According to the authors, the findings corroborate others for Europe as well as the well-known global brightening phenomenon, which followed the global dimming period from ~1970-1985 that was responsible for the ice age scare of the 1970's.

The authors find a (statistically insignificant) decrease of aerosol optical depth of -8%/decade from 1991-2013, which could be due to a decrease of cloud cover and/or other aerosols. As noted by Dr. Roy Spencer, a mere 1-2% change in cloud cover can alone account for global warming or cooling.

The authors also find total column ozone, which is primarily generated by solar UV and can act as a solar amplification mechanism, has increased by 3%/decade.

Findings from the paper: 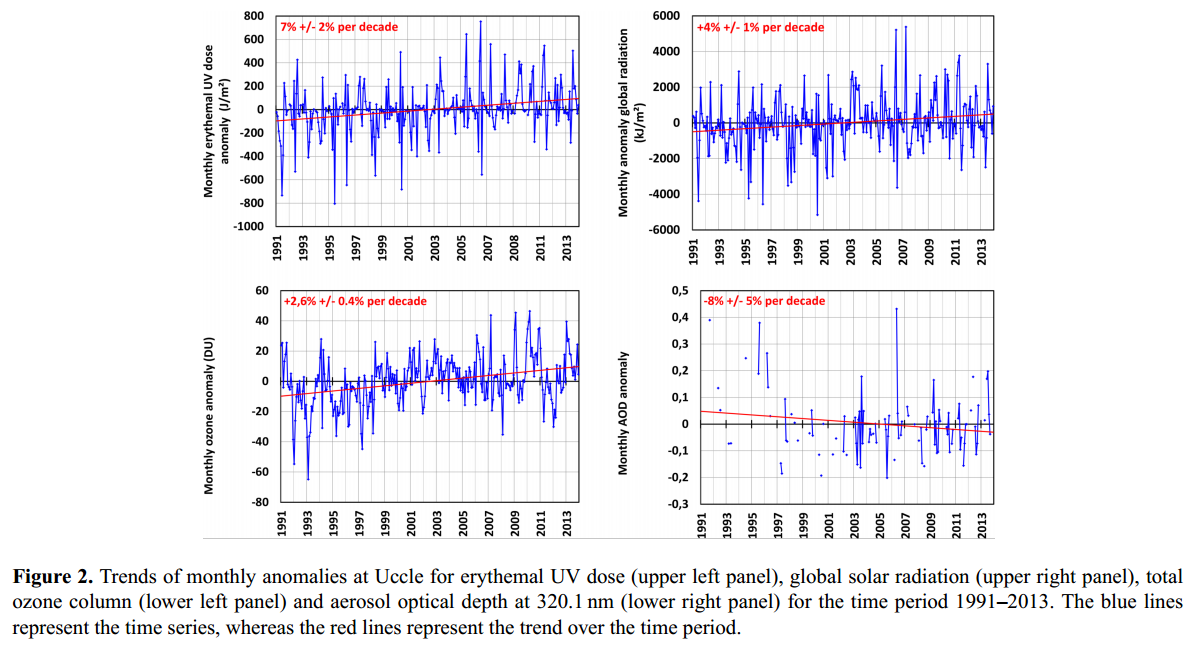 At Uccle, Belgium, a long time series (1991–2013) of simultaneous measurements of erythemal ultraviolet (UV) dose (Sery), global solar radiation (Sg), total ozone column (Q_{O3}$) and aerosol optical depth (τaer) (at 320.1 nm) is available, which allows for an extensive study of the changes in the variables over time. Linear trends were determined for the different monthly anomalies time series. Sery, Sg and QO3 all increase by respectively 7, 4 and 3% per decade. τaer shows an insignificant negative trend of −8% per decade. These trends agree with results found in the literature for sites with comparable latitudes. A change-point analysis, which determines whether there is a significant change in the mean of the time series, is applied to the monthly anomalies time series of the variables. Only for Sery and QO3, was a significant change point present in the time series around February 1998 and March 1998, respectively. The change point in QO3corresponds with results found in the literature, where the change in ozone levels around 1997 is attributed to the recovery of ozone. A multiple linear regression (MLR) analysis is applied to the data in order to study the influence of Sg, QO3 and τaer on Sery. Together these parameters are able to explain 94% of the variation in Sery. Most of the variation (56%) in Sery is explained by Sg. The regression model performs well, with a slight tendency to underestimate the measured Sery values and with a mean absolute bias error (MABE) of 18%. However, in winter, negative Sery are modeled. Applying the MLR to the individual seasons solves this issue. The seasonal models have an adjusted R2 value higher than 0.8 and the correlation between modeled and measured Sery values is higher than 0.9 for each season. The summer model gives the best performance, with an absolute mean error of only 6%. However, the seasonal regression models do not always represent reality, where an increase in Sery is accompanied with an increase in QO3 and a decrease in τaer. In all seasonal models, Sg is the factor that contributes the most to the variation in Sery, so there is no doubt about the necessity to include this factor in the regression models. The individual contribution of τaer to Sery is very low, and for this reason it seems unnecessary to include τaer in the MLR analysis. Including QO3, however, is justified to increase the adjusted R2 and to decrease the MABE of the model.
Posted by MS at 9:42 AM