A new paper published in PNAS on the greenhouse effect allegedly "changes the fundamental understanding of how greenhouse warming comes about." Pardon?

The paper attributes a role to increased CO2 only during the first couple decades to "start the process," after which "global energy accumulation is primarily caused by an increase in absorbed solar radiation rather than reduced outgoing longwave radiation" [from greenhouse gases].

However, observations show that outgoing longwave infrared radiation [OLR] has increased over the past 62 years, not decreased as predicted by AGW theory:


However, the only way the Earth can warm is by decreasing outgoing longwave infrared radiation in relation to incoming energy from shortwave solar radiation, changing the radiative balance. In addition, any such radiative imbalance in the troposphere would be counteracted by the dominant negative-feedback cooling from convection.

The thermodynamics of convection, evaporation, adiabatic lapse rate/pressure/atmospheric mass/gravity dominate the troposphere and “short-circuit” most of the radiative imbalance as shown in fig 4 of this paper describing radiative-convective equilibrium in planetary atmospheres: 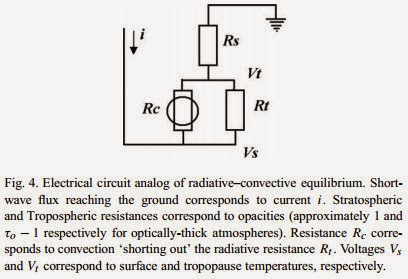 Related: Why global warming is also not explained by a change in "effective radiating level"

"New research suggests global warming is not just a blanket - in the long run, it's more like tanning oil. Climate models forced with CO2 reveal that global energy accumulation is primarily caused by an increase in absorbed solar radiation rather than reduced outgoing longwave radiation."

Read the abstract and get the paper here.
University of Washington news release here
Posted by MS at 4:29 PM