Related: A simple disproof of the runaway greenhouse theory and basis for climate alarm

Posted on May 23, 2012 by Clive Best
Abstract: Positive linear climate feedback for combined water effects is shown to be incompatible with the Faint Sun Paradox. In particular, feedback values of ~2.0 W/m2K-1favored by current GCM models lead to non physical results at solar radiation levels present one billion years ago. A simple model is described whereby Earth like planets with large liquid water surfaces can self-regulate temperature for small changes in incident solar radiation. The model assumes that reflective cloud cover increases while normalized greenhouse effects decrease as the sun brightens. Net water feedback of the model is strongly negative.  Direct evidence for negative water feedback is found in CRUTEM4 station data by comparing temperature anomalies for arid regions (deserts and polar regions) with those for humid regions (mainly saturated tropics). All 5600 weather stations were classified according to the Köppen-Geiger climatology [9]. Two separate temperature anomaly series from 1900 to 2011 were calculated for each region. A clear difference in temperature response is observed. Assuming the difference is due to atmospheric water content, a water feedback value of -1.5 +/- 0.8 W/m2K-1 can be derived.

The Faint Sun Paradox was first proposed by Carl Sagan [1] who pointed out that the geological evidence that liquid oceans existed on Earth 4 billion years ago appears incompatible with a solar output 30% dimmer than today. The sun is a main sequence star whose output is known to increase slowly with age. The total change in solar radiation over this long period turns out to be huge ~ 87 W/m2.   It has been argued that an enhanced greenhouse effect due to very high CO2 and/or CH4 concentrations could resolve this paradox [2]. However, recent geological evidence does not support CO2 as being responsible but instead the authors propose a greater ocean surface leading lower albedo as a likely solution [3]. Others have suggested that high cirrus clouds effectively warmed the Earth [4]. Although the atmosphere must have been very different before photosynthesis began, the presence of large liquid oceans still implies that clouds and water vapor played a similar role in the Earth’s energy balance then, as they do today. 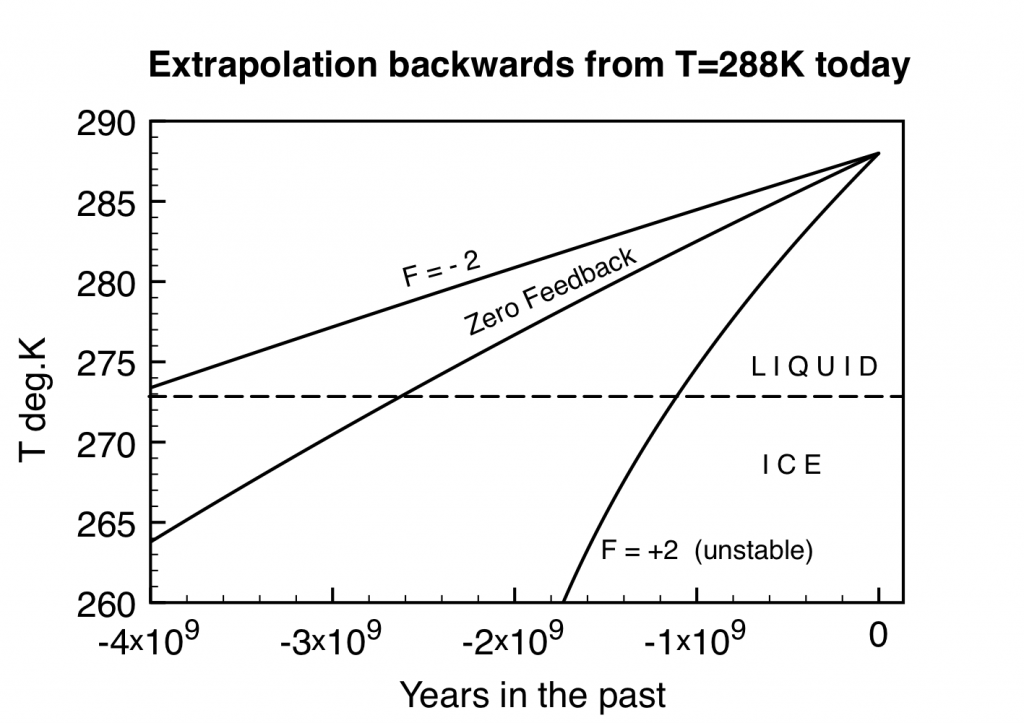 Figure 1: Past temperatures extrapolating backwards from today (T=288ºK) assuming different linear feedback values.
It is apparent that a simple linear positive feedback of +2 leads to unphysical results. The basic problem is that if the temperature falls sufficiently so that 4?T3= F then a singularity occurs ~1.5 billion years ago.  Instead a negative feedback value of -2 W/m2K-1  is more compatible both with current temperatures and with the Faint Sun Paradox..
The evidence is that global surface temperatures have changed rather little over the Earth’s history.  It therefore seems likely that feedbacks were negative during the early lifetime of the Earth to avoid run away surface heating as the sun brightened.  The continuous ~70% surface coverage of water on Earth has apparently stabilized global temperatures. A simple model of how this could work is described next, in analogy with Daisy World proposed by James Lovelock to justify Gaia theory [7].
remainder at CliveBest.com
Posted by MS at 9:13 PM