WSJ: 'The U.S. is so energy rich there's little to prevent us from achieving energy independence'

Those who doubt that market forces still have the power to transform the world aren't paying attention to America's revitalized energy sector.
Four years ago, oil prices climbed to about $145 a barrel world-wide. The impact on the U.S. economy was devastating. Consumers who paid between $2.50 and $3 for a gallon of gas in 2007 paid as much as $5 a gallon in 2008. For many Americans, the high cost of commuting to and from work meant choosing between paying the mortgage or paying for gas. Many chose the latter.
But eventually prices did what they're supposed to do in a market economy—they prompted the development of new sources of oil as well as oil substitutes. Some companies began drilling new oil wells using new technology including 3D seismic imaging and directional drilling. In 2002, when oil prices were in a trough, there were roughly 800 oil-drilling rigs operating in the U.S. Today, there are roughly 2,000. The last time we had that many rigs drilling for oil was 1985. In addition, energy companies went after and found more offshore oil, and far more "unconventional" oil from shale, tar sands and long-abandoned wells than most people thought possible.
The results of these efforts have been impressive. Since 2008, domestic oil production has increased 12%, while imported oil has fallen to 45% of total consumption from 61%. Four years ago, when prices were high, the U.S. was on track to spend nearly $1 trillion on imported oil each year. Lower prices and falling demand mean we are likely to spend $350 billion this year—still high, but falling.
Not surprisingly, companies also sought opportunities developing cheaper alternatives to oil. Chief among these fuels is natural gas, which is a cleaner fossil fuel than oil and coal. In 2008, estimates were that the U.S. had just 12 years of natural gas reserves left. Plans were being put in place to import liquefied natural gas from the Middle East, perhaps even Russia, to meet future demand.
But high energy prices prompted companies to develop new technologies. Hydraulic fracturing—drilling deep vertical wells then drilling horizontally to release natural gas from shale rock—was perfected. Because of that, natural gas reserves increased dramatically while prices fell. In 2008, natural gas sold for about $12-$14 per thousand cubic feet. Now it sells for about $2 per thousand cubic feet. Instead of supplies lasting only 12 years, there is now sufficient natural gas for at least 100 years.
Enlarge Image 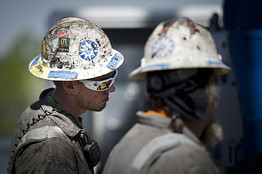 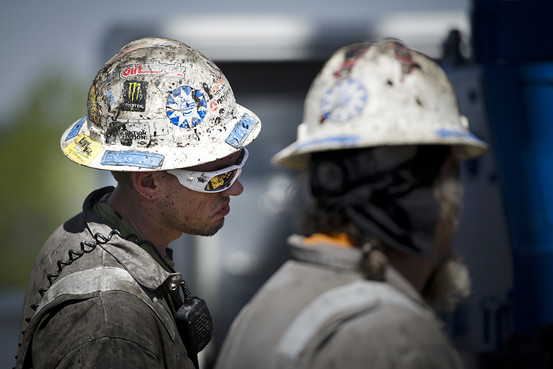 Workers at Consol Energy Horizontal Gas Drilling Rig explore the Marcellus Shale near Waynesburg, Penn., on April 13.
Rather than importing natural gas, the U.S. may begin exporting it. Since natural gas is sold in local rather than global markets, price differentials between countries are high. Average futures prices are about $9.50 per thousand cubic feet in Europe and about $16 per thousand feet in Asia, versus $2 in the U.S. Pricing differences this big will make exporting natural gas lucrative, perhaps even balancing our perennially in-the-red trading account.
Right now, natural gas is so abundant and cheap that some worry the U.S. and Canada, which has large reserves north of those in the U.S. Midwest, may soon run out of storage capacity. Some companies have even announced plans to curtail drilling due to falling prices and oversupply.


But here the price-mechanism is again at work. Trucking companies and fleet operators, wanting to take advantage of low natural-gas prices, are looking into converting trucks from diesel to natural gas, cutting their fuel bills by half. Passing the bipartisan Natural Gas Act (HR1380 in the House and S1863 in the Senate) would facilitate and accelerate this process by providing tax credits for the cost of conversion and for building natural-gas fuel stations, increasing demand even further.
High energy prices have transformed the American energy landscape. A study released last December by the Congressional Budget Office indicates that new oil and gas finds, combined with traditional sources of energy, including cheap-but-dirty coal, has transformed the U.S. from an energy has-been to a heavyweight. According to the CBO, total U.S. energy reserves now exceed those of all other countries, including those in the Middle East. The U.S. is so energy rich there's little to prevent us from achieving energy independence.
Prices more than policy are driving these remarkable changes. Other [non-]problems to be fixed, rising CO2 emissions, for example, will also yield to the indomitable pressure of price, if carbon is taxed. While Washington squabbled over which energy direction to take, and which energy bill to kill, the markets moved us in exactly the direction the country should go—toward cheap, plentiful energy.
Mr. Kurtzman is executive director of the Center for Accelerating Energy Solutions at the Milken Institute.
Posted by MS at 5:03 PM