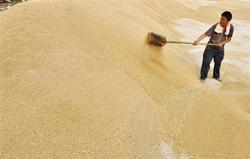 Wed, Jul 17 2013
By Niu Shuping and Naveen Thukral
WU LIU, China/SINGAPORE (Reuters) - China's wheat crop has suffered more severely than previously thought from frost in the growing period and rain during the harvest, and import demand to compensate for the damage could see the country eclipse Egypt as the world's top buyer.
Interviews with farmers and new estimates from analysts have revealed weather damage in China's northern grain belt could have made as much as 20 million tonnes of the wheat crop, or 16 percent, unfit for human consumption. That would be double the volume previously reported as damaged.
Higher imports, which have already been revised upwards on initial damage reports, will further shrink global supplies and support prices, fuelling new worries over global food security...
Global output is expected to rise this year from last, but will still be below demand and leave the world with the lowest wheat stocks since 2008/09...
The weather impact on China's wheat crop will make it harder for Beijing to maintain self-sufficiency in grains. As cities encroaching on arable land and rising incomes drive up demand, China is finding it harder and harder to feed the world's most populous nation with domestic supply.
China has also been snapping up corn shipments in recent weeks with imports forecast to climb to an all-time high of 7 million tonnes this year, according to the USDA.
Posted by MS at 9:00 AM