A paper published today in Global Environmental Change finds that CO2 emissions are essentially self-regulating, that after countries reach a higher GDP level, CO2 emissions stabilize or even decrease, without the imposition of carbon taxes. According to the authors, "Evidence from recent four decades indicates that per capita carbon dioxide emission first significantly and monotonously increase at low income level and flattens after per capita income reaches at about 22,000 $ (2005 constant price)." "A 'first-rise-then-flat' relationship of carbon dioxide per capita and GDP per capita was found", which suggests carbon taxes are unnecessary to stabilize emissions in higher GDP countries. 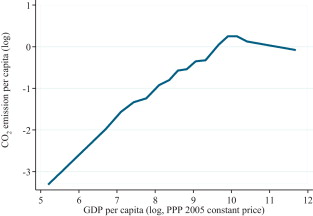 How does carbon dioxide emission change with the economic development? Statistical experiences from 132 countries

Issues concerning what measures should be adopted to achieve a sustainable world with less carbon dioxide emission and in what magnitude should we reduce our emission have been on agenda in both international negotiations and countries’ policy making aimed at coping with potential global climate change. These issues cannot be easily addressed unless comprehensive understanding about the countries’ status quo as well as historical relationship between economic development and carbon dioxide emission are gained. In this paper, we examine the historical relationship between economic development and carbon dioxide emission; the ex ante restrictions on function forms and the poorly handled robustness issues rife in economics literature are synthetically addressed. Evidence from recent four decades indicates that per capita carbon dioxide emission first significantly and monotonously increase at low income level and flattens after per capita income reaches at about 22,000 $ (2005 constant price). We perform various robustness checks by employing different data sources, different model specifications and different econometric estimates. The captured development–emission relationship is robust. Our empirical results indicate factors such as urbanization, population density, trade, energy mix and economic environment impact the absolute level of carbon dioxide emission not the overall income elasticity structure of carbon dioxide emission.
Related post from Dr. Judith Curry:

JC comments:  For the sake of argument, lets assume that the IPCC consensus is roughly correct regarding dangerous anthropogenic climate change, with the dangers becoming apparent in the latter half of the 21st century, and mitigation of CO2 emissions from burning fossil fuels  is necessary, urgent, imperative (or whatever the latest word being used in professional society advocacy statements).

How do you square this climate policy ‘imperative’ with the real need right now of the majority of the people on the planet for greater access to energy?  Further, the potential development associated with increased energy could make these societies far more resilient to natural disasters (whatever the cause) than they currently are now. Not to mention that developed countries have lower population growth rates and pay more attention to their environment.

Which imperative is more ‘moral’ – to insist on reduced fossil fuel emissions over concern about what might happen > 50 years hence, in a future world that we can hardly imagine, or to support energy equity in the developing world and concretely improve lives in the here and now?  How would cost/benefit analysis of this tradeoff even be conducted?  What is the ‘morality’ here?

To those scientists that are advocating for a global emissions reduction policy, have you thought this one through (Jim Hansen seems to have)?  This is one of the issues that makes the climate change problem so wicked.