Hansen 1998: "the forces that drive long-term climate change are not known with accuracy sufficient to define future climate change"

"In 1988, James Hansen, director of NASA's Goddard Institute, brought "global warming" to the public's attention for the first time when he testified before the Senate that he was "99 percent certain...the (human-caused) greenhouse effect...is changing our climate now." ....
"By 1998, James Hansen had changed his tune, writing "the forces that drive long-term climate change are not known with accuracy sufficient to define future climate change."

"A study in Science on October 2, 1998 refutes the claim that the current warming could only be caused by human activities. It showed that 12,500 years ago global temperature rose by more than 20 degrees in approximately 50 years. This natural change was more than 10 times the "catastrophic" warming environmentalists claim only humans could be causing and it occurred in half the time." 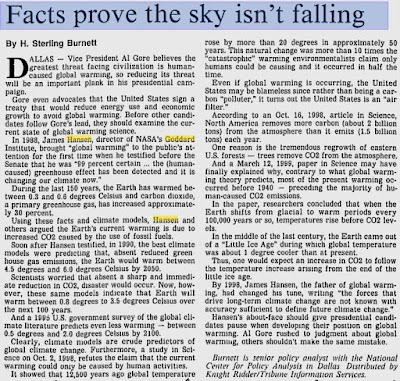