Paper: Water vapor feedback is negative, not positive as assumed by IPCC alarmists

Global warming scenarios from CO2 increases are envisioned to bring about rainfall enhancement and resulting upper troposphere temperature and water vapor increases. The initial warming resulting from the blockage of infrared (IR or OLR) radiation due to CO2’s increases has been programmed in climate models to develop yet additional rainfall, temperature, and water vapor increases. This causes an additional blockage of IR energy to space which is substantially larger than the original CO2 blockage of IR by itself. This additional longwave IR blockage of energy to space (a positive feedback mechanism) is simulated in the models to be twice or more as strong as the original IR blockage from CO2 alone. We question the reality of this positive feedback mechanism. This study is directed towards determining the reality of such large positive feedback processes. This is a crucial question for determining the likely amount of global warming that will result from the anticipated doubling of CO2 by the end of the 21st century.

We have analyzed a wide variety of albedo and IR differences which are associated with rainfall variations on many different space and time scales. Our goal is to determine the extent to which we are able to accept or reject the reality of the Global Climate Model (GCM) simulations. The following analysis indicates that the GCM simulation of the influence of a doubling of CO2 give far too much global warming. We anticipate that a doubling of CO2 will act in a way to cause the global hydrologic cycle to increase in strength by approximately 3-4 percent. Our analysis indicates that there will be very little global temperature increase (~0.3oC) for a doubling of CO2, certainly not the 2-5oC projected by the GCMs.
... 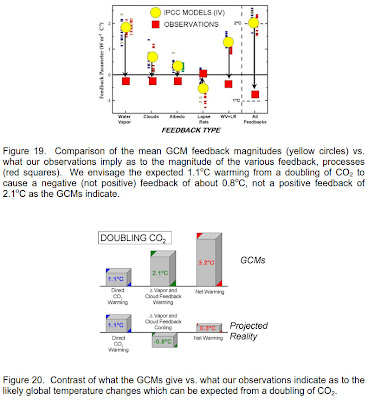 The modelers have made the crucial, but faulty, assumption that as temperature rises from increased CO2 that it will do so in a way that keeps RH [relative humidity] constant. This requires that CO2 increases that produce temperature increases must also cause water vapor increases and further blockage of IR to space. This leads to yet higher temperature and higher water vapor contents and greater blockage of energy to space.

The basic error of the GCMs has been their general belief in the National Academy of Science (NAS) 1979 study – often referred to as The Charney Report - which hypothesized that a doubling of atmospheric CO2 would bring about a general warming of the globe’s mean temperature of between 1.5 – 4.5oC (or an average of ~ 3.0oC). These high warming values were based on the report’s assumption that the RH of the atmosphere would remain quasi-constant as the globe’s temperature increased. This assumption was made without any type of cumulus convective cloud model and was based solely on the Clausius-Clapeyron (CC) equation1 and the assumption that the RH of the air will remain constant during any future CO2-induced temperature changes. If RH remains constant as atmospheric temperature increases then water vapor content in the atmosphere must rise exponentially (Figures 10 and 11). The water vapor content of the atmosphere rises by about 50 percent if atmospheric temperature is increased by 5oC and RH remained constant. Upper tropospheric water vapor increases act to raise the atmosphere’s radiation emission level to a higher and colder level. This reduces (decreases σT4) the amount of outgoing IR energy which can escape to space.

Figure 10. The influential NAS report of 1979 which deduced that any warming of the globe from increased CO2 would occur with constant RH. This would assure an increase in atmospheric water vapor (q) with any temperature rise. This deduction was made without consideration for how the globe’s hydrologic cycle functions.

Some of the climate modelers, such as the early NASA-GISS (Hansen 1988) model, have even gone further than the CC equation would specify for water vapor increasing with temperature. Hansen’s early GISS model assumed that for increases of CO2, that upper tropospheric RH would not just stay constant but actually increase. The upper tropospheric water vapor (q) which Hansen’s assumed for a doubling of CO2 in his early model led him to increase water vapor (∆q) in the upper troposphere by nearly 50 percent. This caused his model to specify a tropical upper tropospheric atmospheric warming for a doubling of CO2 of as much as 7oC (Figure 12 and Figure 13). No wonder Hansen got such high global warming estimates for a doubling of CO2. It was these excessive warming values from grossly unrealistic model assumptions that he presented to a US Senate Committee during his famous hearing in June of 1988. It is a mystery that this gross technical flaw was not pointed out at that time.

Not only were Hansen’s extreme and unrealistically high values of upper tropospheric moisture and temperature increases (for a doubling of CO2) not challenged by his fellow modelers at the time, they were instead closely emulated by most of the other prominent GCMs of NOAA-GFDL (Figure 14), NCAR (Figure 15) and the UK Met Office (Figure 16). All of these early GCM simulations were designed to give unrealistically high amounts of upper tropospheric water vapor increases for doubling of CO2 and, as a result, additional extra large blockage of IR energy to space with resulting large and unrealistic upper level temperature increases.

Our analysis does not show significant increases of upper tropospheric temperature and moisture with enhancement of tropical or global rainfall amounts of 2-4 percent that are similar to what would be expect to occur with a doubling of CO2. This has also been discussed by Douglass et al. (2007) who show that tropical upper-tropospheric measurements and GCM results do not agree.
...
CONCLUSIONS

Observations of upper tropospheric water vapor over the last 3-4 decades from the NCEP/NCAR reanalysis data and ISCCP data show that upper tropospheric water vapor appears to undergo a small decrease while IR or outgoing longwave radiation (OLR) undergo a small increase. This is opposite to what has been expected from the GCMs. These models have erroneously exaggerated the magnitude of the water vapor feedback. They have also neglected the strong enhancement of albedo which occurs over the rain and cloud elements.

We should disregard what the GCMs have been saying about global warming from CO2 doubling.  We should not set mandatory quotas on replacement of fossil fuel energy with renewable energy (wind, solar, etc.) at this time. The honest and objective science to support such serious energy utilization changes is just not there.
Posted by MS at 12:27 PM