Alarmist becomes skeptic on climate models: Trenberth admits new paper 'undermines the confidence in models...& so why should we trust their future projections?"

By Brian Kahn
The question of how global warming will influence El Niño has been a challenging one for scientists to answer. A new study suggests while the overall number of El Niños is unlikely to increase, particularly strong “super” El Niños are likely to occur twice as frequently in a warming world.
El Niño refers to a pattern of unusually warm water stretching across the surface of eastern equatorial Pacific that occurs every 3-7 years. That warm water influences climate patterns around the world, increasing the likelihood of wet and cool weather in the Southeast, heavy rain in California, warm and dry conditions in the Pacific Northwest, and host of other global impacts.

A map showing sea surface temperature anomalies leading up and during the 1997-98 super El Nino.
Credit: NOAA View
The strongest El Nino ever recorded occurred in 1997-98. It led to heavy rains across the southern U.S., landslides in Peru, wildfires in Indonesia, and the cratering of the anchovy fishery in the eastern Pacific. These and other impacts were responsible an estimated $35-45 billion in damage and 23,000 deaths worldwide.
Another “super” El Nino in 1982-83 wreaked similar havoc globally.
In a study published on Sunday in Nature Climate Change, researchers show that climate change could double the frequency of super El Nino events.
To obtain the results, researchers led by Wenjun Cai, a climate modeler at Australia’s Commonwealth Scientific and Industrial Research Organisation, used 20 climate models to simulate ocean temperatures and rainfall in the tropical Pacific with and without changes in greenhouse gases. Cai looked specifically at the period of December-February, when El Nino tends to peak and its impacts are the most widespread.
“Under greenhouse warming the eastern equatorial Pacific warms faster than the surrounding regions . . . making it easier to have maximum SST (sea surface temperatures) in the eastern equatorial Pacific, and hence more occurrences of extreme El Nino events,” Cai said in an email.
Surface waters in the eastern tropical Pacific averages around 72°F, about 10°F cooler than the western tropical Pacific. Cai said that makes it easier to warm, which reduces the overall temperature difference between the two regions and makes conditions more ripe for super El Ninos to develop. [extreme weather is due to temperature differentials, thus reducing differentials reduces extreme weather]
Specifically, the results show that the likelihood of super El Ninos doubles from one every 20 years in the previous century to one every 10 years in the 21st century.
While the results show an increase in the number of abnormally strong El Ninos, they don’t show a change in the total number of El Ninos. The study also shows that the the current influence El Nino has on weather elsewhere is unlikely to change. Both are results that other studies have found as well.
The core of Cai’s results, that more super El Ninos are likely, was disputed by Kevin Trenberth, a senior scientist at the National Corporation for Atmospheric Research.
He said some of the models used in the study overestimate the past number of El Nino events by a wide margin and do a poor job of representing them and their impacts.
“This seriously undermines the confidence that the models do an adequate job in ENSO (El Nino-Southern Oscillation) simulations and so why should we trust their future projections?” he said in an email.
Trenberth also said that some long-range climate models also fail to adequately simulate other natural climate patterns that influence El Nino let alone how they might also shift in a warming world.
Lisa Goddard, director of the International Research Institute for Climate and Society provided a similar assessment of some of the models used in the study. However, she said the methodology was sound and if the results are accurate, they could provide helpful information for scientists making seasonal forecasts around the globe and decision makers who rely on them.
“Since the majority of skill in seasonal forecasts is realized during El Nino events (and predictions become more skillful over more of the world's land areas), we would be able to prepare much better for the impacts of these events,” she said. “Adverse and costly climate happens in all years. We are just better able to predict that in years with strong El Nino and La Nina events.”
Though the the 1997-98 super El Nino caused extensive damage, decision makers in California poured an extra $7.5 million into flood preparedness based on seasonal forecasts that accurately predicted it months ahead of time. The state still suffered $1.1 billion in losses during the event, but that was half the total suffered during the 1982-83 super El Nino.
Water managers in Tampa Bay regularly use seasonal forecasts and the predictability of El Nino to plan for water availability in the coming months.
There is evidence that El Ninos has been changing already. Research published in January last year showed a roughly 20 percent increase in El Nino intensity over the course of the 20th century, though it didn’t specifically attribute that change to human greenhouse gas emissions.
---------------------------------------------------------------------------------------
The new paper is also contradicted by many other peer-reviewed publications finding that the strength and intensity of El Ninos is not expected to change with warming [e.g. paper below and many others] or may even decrease with warming.
Observations show the strength and frequency of El Ninos is strongly related to the phase of the natural Pacific Decadal Oscillation. [also here, here, here, here, etc.] In addition, the strength of the Pacific Decadal Oscillation has decreased over the past 113 years since 1900, although warmists like to cherry-pick a starting date of 1950 at the lowest PDO index value of the past 113 years to claim an increase in strength: 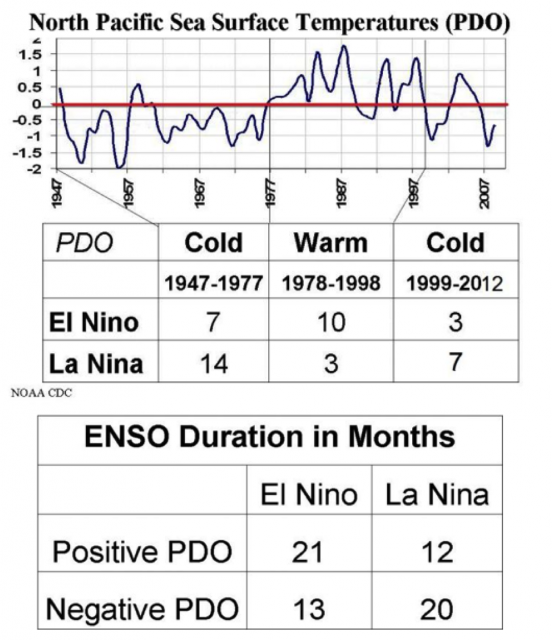 
El Niño brings widespread drought (i.e., precipitation deficit) to the tropics. Stronger or more frequent El Niño events in the future and/or their intersection with local changes in the mean climate toward a future with reduced precipitation would exacerbate drought risk in highly vulnerable tropical areas. Projected changes in El Niño characteristics and associated teleconnections are investigated between the twentieth and twenty-first centuries. For climate change models that reproduce realistic oceanic variability of the El Niño–Southern Oscillation (ENSO) phenomenon, results suggest no robust changes in the strength or frequency of El Niño events. These models exhibit realistic patterns, magnitude, and spatial extent of El Niño–induced drought patterns in the twentieth century, and the teleconnections are not projected to change in the twenty-first century, although a possible slight reduction in the spatial extent of droughts is indicated over the tropics as a whole. All model groups investigated show similar changes in mean precipitation for the end of the twenty-first century, with increased precipitation projected between 10°S and 10°N, independent of the ability of the models to replicate ENSO variability. These results suggest separability between climate change and ENSO-like climate variability in the tropics. As El Niño–induced precipitation drought patterns are not projected to change, the observed twentieth-century variability is used in combination with model-projected changes in mean precipitation for assessing year-to-year drought risk in the twenty-first century. Results suggest more locally consistent changes in regional drought risk among models with good fidelity in reproducing ENSO variability.
Related:

New paper finds Pacific cyclone activity is at the lowest levels of the past 5,000 years

New paper finds another non-hockey-stick in the Pacific Ocean; cooling over past 7,000 years

Our Climate Models Are Aglow with Whirling, Transient Nodes of Thought Careening through a Cosmic Vapor of Invention