A new paper from SPPI and Christopher Monckton shows how the IPCC has quietly conceded defeat, that it's models projecting catastrophic doom from anthropogenic global warming have been falsified in the face of real-world observations.

"the IPCC has quietly, furtively, but very definitely capitulated in the face of the real-world evidence that the models have failed."

"The IPCC’s explicit reliance on its own “expert assessment” rather than upon the models’ projections is a significant climb-down."

For the Full Report in PDF Form, please click here.
[Illustrations, footnotes and references available in PDF version]
Excerpts:
You couldn’t make it up. A Russian “Antarctic research vessel” carrying not diligent scientific researchers but 74 taxpayer-funded climate extremists on a junket to help them make up headlines about sea ice melting because of “global warming” finds itself stuck in – er – sea ice. And sea ice in high summer at that. The extremists, as so often happens, had believed their own propaganda. They had believed Al Gore. They had believed, poor saps, that Antarctica was warming and melting. It isn’t.
Aside from the Antarctic Peninsula (just 2% of the continent), which has an anomalous climate, Antarctica has been cooling since satellite records began, and sea-ice extent there has been growing.
The IPCC has quietly, furtively, but very definitely capitulated in the face of the real-world evidence – first revealed here at SPPI – that the models have failed.
The IPCC’s explicit reliance on its own “expert assessment” rather than upon the models’ projections is a significant climb-down.
Despite record increases in CO2 concentration, there has been no global warming for almost 13 years, or, by satellite measurements, for more than 17 years, and no warming distinguishable from the combined measurement, overage, and bias uncertainties for 18 years.
Multiple lines of evidence now confirm that the models and consequently the IPCC have overestimated global warming. yet neither that misconceived organization nor any of its host of unthinking devotees has displayed any remorse. 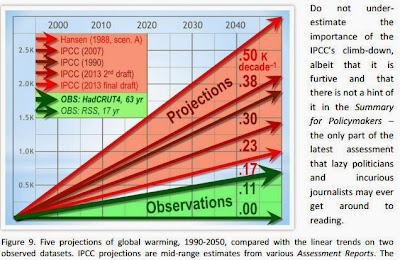