DB says:
December 28, 2013 at 5:34 pm
Jimbo wrote:
“Wasn’t Gavin for a specified period of no global surface warming after which he would reconsider CAGW? I can’t find it but I vaguely recall it was a question in one of Real Climate’s comments sections.”
Ah, Gavin’s goalposts. Gavin Schmidt of NASA has a website called RealClimate. Back in 2007 there was a post on signs of climate change.
http://www.realclimate.org/index.php/archives/2007/12/a-barrier-to-understanding/
In the discussion thread Daniel Klein asks at #57:
“OK, simply to clarify what I’ve heard from you:
(1) If 1998 is not exceeded in all global temperature indices by 2013, you’ll be worried about state of understanding
(2) In general, any year’s global temperature that is “on trend” should be exceeded within 5 years (when size of trend exceeds “weather noise”)
(3) Any ten-year period or more with no increasing trend in global average temperature is reason for worry about state of understandings
I am curious as to whether there are other simple variables that can be looked at unambiguously in terms of their behaviour over coming years that might allow for such explicit quantitative tests of understanding?”
[Response: 1) yes, 2) probably, I'd need to do some checking, 3) No. There is no iron rule of climate that says that any ten year period must have a positive trend. The expectation of any particular time period depends on the forcings that are going on. If there is a big volcanic event, then the expectation is that there will be a cooling, if GHGs are increasing, then we expect a warming etc. The point of any comparison is to compare the modelled expectation with reality - right now, the modelled expectation is for trends in the range of 0.2 to 0.3 deg/decade and so that's the target. In any other period it depends on what the forcings are. - gavin]
__________________________________________

In fact, 1998 has not been exceeded by any of the five global temperature indices as of the end of 2013, so Gavin, it's now finally time for you to worry about the state of climate science rather than CAGW. 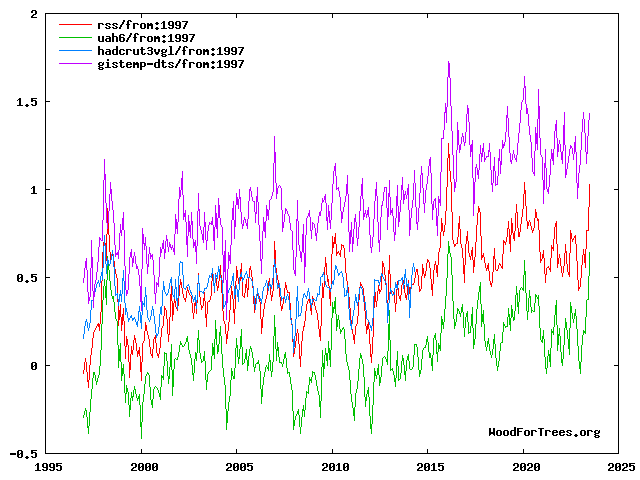