The author of an infamous 1975 Newsweek global cooling scare article has been quoted this week saying about the article, "I stand by it. It was accurate at the time."

How Newsweek's 'global cooling' story got its legs 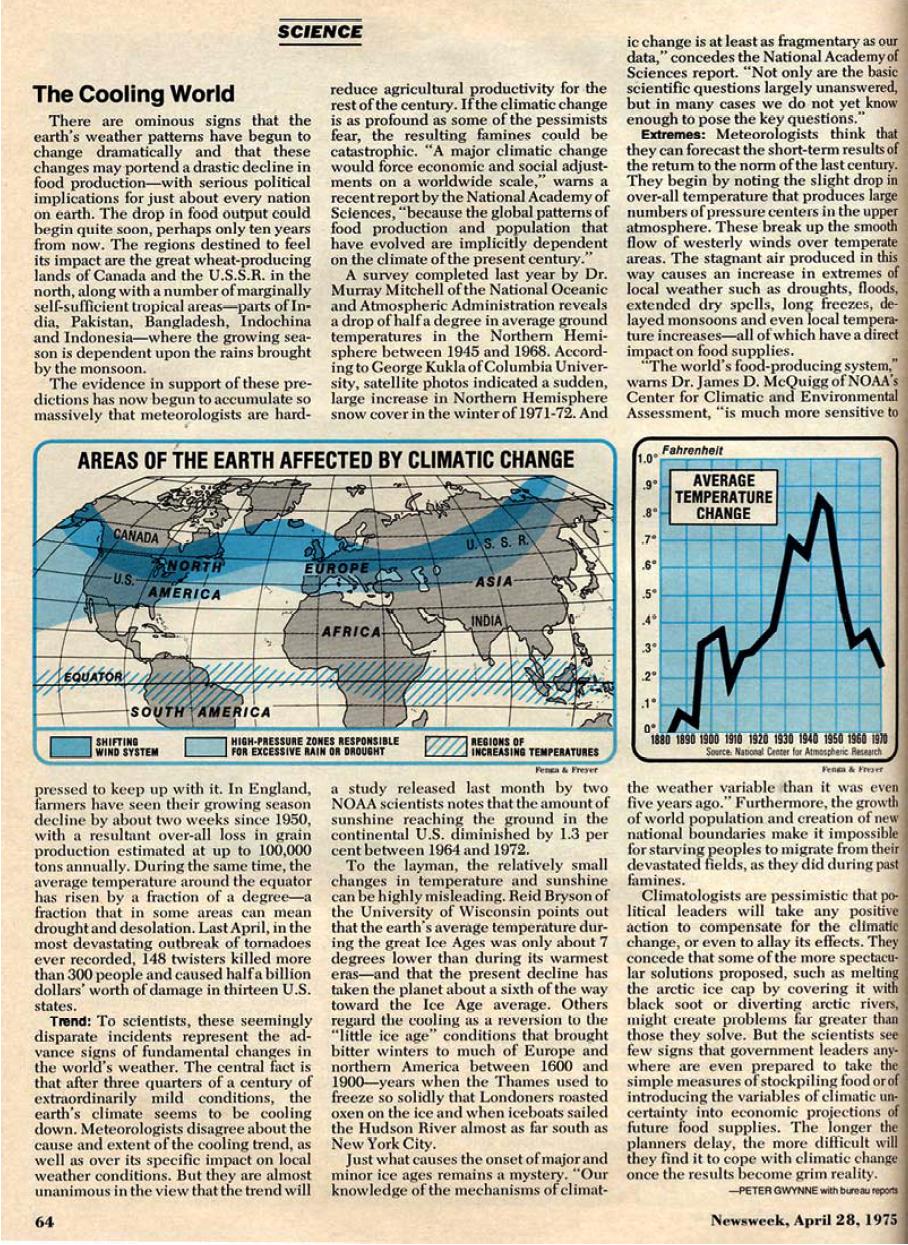 Nine paragraphs written for Newsweek in 1975 continue to trump 40 years of climate science. It's a record that has the author amazed.

By Doug Struck The Daily Climate
BOSTON – Temperatures have plunged to record lows on the East Coast, and once again Peter Gwynne is being heralded as a journalist ahead of his time. By some.
Gwynne, now 72, is a bit chagrinned that a long career of distinguished science and technology reporting is most remembered for this one story.
Gwynne was the science editor of Newsweek 39 years ago when he pulled together some interviews from scientists and wrote a nine-paragraph story about how the planet was getting cooler.
Ever since, Gwynne's "global cooling" story – and a similar Time Magazine piece – have been brandished gleefully by those who say it shows global warming is not happening, or at least that scientists – and often journalists – don't know what they are talking about.

Fox News loves to cite it. So does Rush Limbaugh. Sen. James Inhofe, R-Okla., has quoted the story on the Senate floor.
Gwynne, now 72, is a bit chagrinned that from a long career of distinguished science and technology reporting, he is most remembered for this one story.
"I have, in fact, won prizes for science writing," he said, with just a whiff of annoyance, in an interview this week.

Popping up - again and again

His April 28, 1975 piece has been used by Forbes as evidence of what the magazine called "The Fiction of Climate Science." It has been set to music on a YouTube video. It has popped up in a slew of finger-wagging blogs and websites dedicated to everything from climate denial to one puzzling circuit of logic entitled "Impeach Obama, McCain and Boehner Today."
From the latest crop:
Lou Dobbs on Fox News: "This cycle of science… if we go back to 1970, the fear then was global cooling. "
Rush Limbaugh: "I call [global warming] a hoax… A 1975 Newsweek cover was gonna talk about the ice age coming. So they're really confused how to play it."
Sean Hannity on Fox News: "If you go back to Time Magazine, they actually were proclaiming the next ice age is coming, now it's become global warming… How do you believe the same people that were predicting just a couple decades ago that the new ice age is coming?"
Donald J. Trump: "This very expensive global warming bullshit has got to stop. Our planet is freezing.…"

'Accurate at the time'

Most of the time, Gwynne, who still writes on technology and science from his home in Cape Cod, Mass., takes it good-naturedly.
"It's part of the game, once you get from science to politics, that's the way it's played," he said. "I just hope people don't think I think that way."
And still, Gwynne notes of his story, "I stand by it. It was accurate at the time."
The story observed – accurately – that there had been a gradual decrease in global average temperatures from about 1940, now believed to be a consequence of soot and aerosols that offered a partial shield to the earth as well as the gradual retreat of an abnormally [naturally] warm interlude.
Some climatologists predicted the trend would continue, inching the earth toward the colder averages of the "Little Ice Age" from the 16th to 19th centuries.
"When I wrote this story I did not see it as a blockbuster," Gwynne recalled. "It was just an intriguing piece about what a certain group in a certain niche of climatology was thinking." [such as Steven Schneider, who was for global cooling before he was for global warming]

Pushing the envelope 'a little bit'

And, revisionist lore aside, it was hardly a cover story. [It was a cover story on Time Magazine twice] It was a one-page article on page 64. It was, Gwynne concedes, written with a bit of over-ventilated style that sometimes marked the magazine's prose: "There are ominous signs the earth's weather patterns have begun to change dramatically..." the piece begins, and warns of a possible "dramatic decline in food production."
"Newsweek being Newsweek, we might have pushed the envelope a little bit more than I would have wanted," Gwynne offered.
But the story was tantalizing enough that other variations – somewhat more nuanced – were written by the New York Times and National Geographic, among others. The theory picked up support from some pretty reputable scientists: the late, esteemed Stephen Schneider of Stanford endorsed a book on the issue.
But there also was a small but growing counter-theory that carbon dioxide and other pollutants accompanying the Industrial Age were creating a warming belt in the atmosphere, and by about 1980 it was clear that the earth's average temperature was headed upward.
Even today, "there is some degree of uncertainty about natural variability" [such as what caused warming from 1850-1940's, cooling 1950's-1970's, and the 'pause' over past 17 years, none of which could have been caused by man-made CO2] acknowledged Mark McCaffrey, programs and policy director of the National Center for Science Education based in Oakland, Calif. "If it weren't for the fact that humans had become a force of nature, we would be slipping back into an ice age, according to orbital cycles." [False - see 100,000 year problem of Milankovitch theory and completely dismisses the Sun as the cause]

But earth's glacial rhythms are "being overridden by human activities, especially burning fossil fuels," McCaffrey noted. The stories about global cooling "are convenient for people to trot out and wave around," he said, but they miss the point:
"What's clear is we are a force of nature. Human activity – the burning of fossil fuels and land change – is having a massive influence. We are in the midst of this giant geoengineering experiment." [so claims the journalist]
And, Gwynne protested: "I wrote this in 1975!"
Born in England, Gwynne has written for a slew of American and foreign outlets. He left Newsweek in 1981, he ran Technology Review at the Massachusetts Institute of Technology, covered space for High Technology, worked for The Scientist in Washington, moved to Hong Kong to run Asia Technology for Dow Jones, and returned to the United States to freelance in 1994.
He remains the North American correspondent for Physics World, based in England, from which perspective he views the "weird and wonderful" American relationship with science. "It's been American science and scientists – particularly NASA – that showed the climate is changing," he noted. Yet, unlike in most of Europe, American politicians remain divided over climate science.

The unsavory afterlife of his 1975 story clearly has not soured his journalistic fervor. "I've been able to write for a lot of different audiences, physicists, engineers and the general public," Gwynne said. "I've been willing to accept that some of that is misused and misinterpreted."
By and large, he added, the U.S. science press has done "a pretty good job" of covering climate change. But "the political press doesn't check. It tends to do 'on the one hand, on the other hand.' A lot of reporters simply will not go into issues like global warming with any understanding that the sides are not equal."
Journalists should not ignore climate deniers, he cautioned. "You have to give all sides a fair hearing." But that does not mean they have to be treated equally "if they don't have the data." [climate skeptics DO have the data, before and after it has been tampered] To do so, he said, is false balance "that leaves readers out on a limb."
"Your job as a journalist is to give each side its best shot," said Gwynne. Even if the ammunition is four decades old. [So did Gwynne ever write any article giving any skeptic their "best shot" or opportunity to present data? highly doubtful]
Posted by MS at 2:04 PM