A paper published today in Global and Planetary Change reconstructs temperatures in Northern Fennoscandia [within the Arctic circle] over the past 1,600 years and finds more non-hockey-sticks clearly demonstrating that the Arctic was warmer than the present during the Medieval Warm Period. The paper adds to over 1,000 peer-reviewed published non-hockey-sticks finding the Medieval Warm Period was global, as warm or warmer than the present, and that there is nothing unusual, unnatural, or unprecedented about the current warm period.

So much for "Arctic amplification." 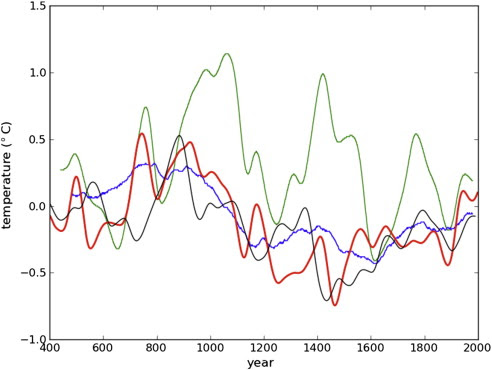 All four of these temperature reconstructions show the Medieval Warm Period ~1000 years ago was warmer than the present [year 2000].

The classical Maximum Density data of 65 Torneträsk trees from years 441-1980 AD are studied in millennial, centennial and volcanic scales. The millennial scale is analyzed applying a specific filtering method. In that scale, the climate is cool after 1200-1400 AD. This more or less steady period is suggested to be due to volcanic episodes, which reduced the northward heat transport in the North Atlantic. The century scale variation, on the other hand, is suggested to be due to [natural] internal oscillations in sea surface temperature (SST) and to be connected to variations in the Arctic sea ice. Specifically, these oscillations have caused an additional warming and cooling trend in Northern Fennoscandian temperatures before and after 1930’s, respectively.
Variations in the temperature estimates are explained by the results for different temporal scales. All of them show local impacts leading to differences when compared with hemispheric estimates. The long-term estimate of the temperature as derived from the present Torneträsk data is found to be biased. The source of that is unknown.
Posted by MS at 1:12 PM