...
PRESIDENT DECLARES END OF GLOBAL WARMING DEBATE
More from the State of the Union address: President Obama contended that "the debate is settled. Climate change is a fact." But fascinatingly, the president's certainty comes at a time when even leading climate scientists are struggling to account for the almost-total absence of global warming over the past 16 years. Perhaps the march toward ever-higher global average temperatures will resume. But whether it does or not, climate scientists are already having to account for greater natural variability and other mitigating factors as they seek to explain why increasing CO2 concentrations have not led monotonically to higher average temperatures.

...AND TAKES CREDIT FOR BOOM IN FOSSIL FUELS
A Journal editorial notes that much of Mr. Obama's speech "tried to address the economic insecurity that his own policies have done so much to create. Thus the odd combination of claiming credit for the recovery, even for the domestic oil boom he has resisted, while fretting about stagnant wages for "the middle class." Speaking of last night, the Washington Post has an interesting chart illustrating how the frequency of certain words in the State of the Union has changed over time.

Related at WUWT:
Last night in the SOTU address, Obama made this pronouncement about climate change:
But the debate is settled.  Climate change is a fact.
To that, I say this:
There’s never been any assertion that climate didn’t change, the idea that somehow this is something new to the 21st century is absurd. For example, this graph illustrates just that fact: 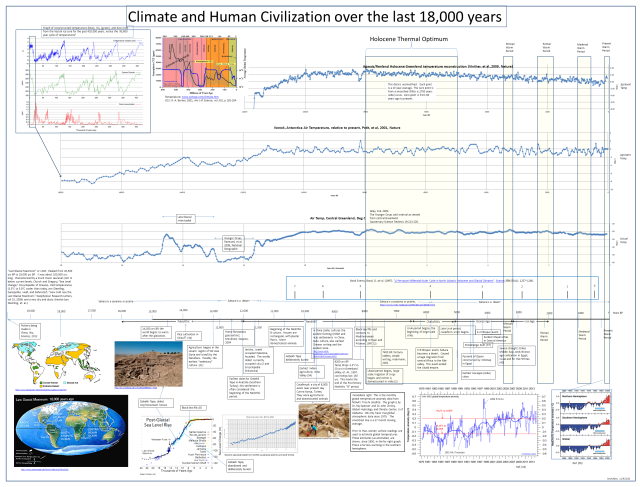 Click image for a full sized print (3000 pixels wide, suitable for printing) or choose the PDF below. Note the blip in the top line at the far right, that’s our climate change today. Source: Andy May
Younger_Dryas_to_Present_Time_Line (PDF)
And, as science itself has demonstrated through history, it is never settled, it is always searching for new information, retesting, and sometimes discarding old ideas based on new knowledge.
Saying “the science is settled” is as ridiculous as this famous quote attributed to Lord Kelvin who reportedly said in 1900*

“There is nothing new to be discovered in physics now. All that remains is more and more precise measurement”.