WSJ: Why climate-change activists are losing the battle for public opinion

The cause of global carbon regulation may be lost, but enemies still can be punished.

Surely, some kind of ending is upon us. Last week climate protesters demanded the silencing of Charles Krauthammer for a Washington Post column that notices uncertainties in the global warming hypothesis. In coming weeks a libel trial gets under way brought by Penn State's Michael Mann, author of the famed hockey stick, against National Review, the Competitive Enterprise Institute, writer Rand Simberg and roving commentator Mark Steyn for making wisecracks about his climate work. The New York Times runs a cartoon of a climate "denier" being stabbed with an icicle.

These are indications of a political movement turned to defending its self-image as its cause goes down the drain. That's how thoroughly defunct, dead, expired is the idea that humanity might take charge of earth's atmosphere through some supreme triumph of the global regulatory state over democracy, sovereignty, nationalism and political self-interest, the very facts of political human nature.

Mr. Steyer's thinking is puzzling unless his goal is to make $100 million disappear. If his purpose were to elect Democrats, wouldn't his money go further attacking Republicans on matters of interest to voters? If he wants to move the ball on climate change, wouldn't a better place to start be undoing the damage his fellow climate lobbyists have done to the cause with their hysterical exaggerations, false statements and moral bullying?

He could begin by running ads leveling with Americans about climate science. We know with comfortable certainty that human industry is adding to carbon dioxide, a so-called greenhouse gas, in the atmosphere. An insoluble noise-to-signal problem, though, is how much the human component may have influenced climate change already. And forecasts of future warming depend on theoretical models that are highly speculative and necessarily suspect.

Then there's the political problem: Nothing America could do by itself would make a significant difference. Anything agreed with other countries, given diplomatic incentives, would be an empty gesture designed mainly to benefit incumbent politicians. 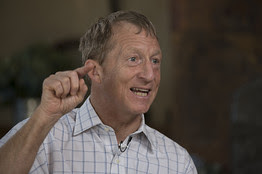 Indeed, a rational case for action on cost-benefit grounds is challenging to make at all. Even if it weren't, the nature of human power games, which advocates are powerless to change, means the effort could easily degenerate into a corrupt scramble for climate pork (see America's ethanol and Germany's solar subsidies).

If this sounds like a counsel of despair, think again. The counsel of despair was to rest mankind's hopes on a colossal pipedream. A world-wide social engineering project was never going to happen—luckily, since its results would have been less charming than activists imagine.

After 35 years, it's time to accept that adaptation is the way ahead. The problems of climate change, whatever its causes, are the same old human problems of poverty, disease and natural hazards like floods, storms and droughts. The best hope on offer is the continued accumulation of human wealth and knowledge.

Those who wish to slit their wrists at this point, feel free. But think about this: When human knowhow produces new energy technologies to replace current energy technologies, as it eventually will, we know the new technologies will be lower carbon. Why? Because extracting and distributing fossil fuels is fantastically expensive and becoming more so.

Chevron's massive Gorgon gas project in the coastal waters of Australia is expected to cost $54 billion. Exxon, Shell and several others are spending $116 billion to get oil from under the Caspian Sea in a remote part of Kazakhstan. Not to be flip, but a battery 10 times more efficient than today's would largely undermine the economics of these projects and make its inventor extraordinarily rich.

But engineering and venture capital (Mr. Steyer's job until he retired a year ago) are hard work and require personal resilience, while the pleasure of climate warriorhood is sitting at your little blog and picturing yourself a moral hero whose opponents deserve to be silenced if not exterminated. In our time, climate activism has devolved into self-medication for the moderately mentally ill (and who's to say this is not a useful service). Anyone genuinely concerned about the climate future might do better to get an engineering or finance degree.
Posted by MS at 1:02 PM