How can Uranus have storms hot enough to melt steel? A runaway greenhouse effect?

How does that happen on a planet 30 times further from the Sun than Earth, and without any volcanic activity or SUVs?

According to infrared images taken with the Keck telescope, these storms radiate at peak wavelengths of 1.6 - 2.2 microns. Using Wien's Displacement Law, we can calculate the temperature of a blackbody radiating at these peak wavelengths as:


This is amazing considering that Uranus only receives a trifling 3.71 W/m2 energy from the Sun, which per the Stefan-Boltzmann Law is equivalent to a blackbody radiating at a temperature of -183°C, 90°K, or -298°F.

Furthermore, how do greenhouse gases raise the outgoing radiating temperature by 1811°K - 90°K = 1721°K, a temperature increase of more than 20 times? [90°K is the Uranus equilibrium temperature with the Sun]

It's clearly impossible, unless you program a GIGO climate model to say so.

The real and very simple explanation for this phenomenon is the ideal gas law, not radiative forcing from greenhouse gases, which as the great physicist Maxwell noted, results in a temperature gradient of an atmosphere within a gravity field.

As explained in the basic physics quiz for climate alarmists,

Atmospheric mass/pressure/gravity establish the lapse rate/tropospheric temperature profile of all of the planets in our solar system with thick atmospheres, as demonstrated by a paper in Nature by Robinson and Catling. Convection dominates over radiative forcing in the troposphere of each of these planets as also demonstrated by Robinson and Catling.

Note also as stated by the report below,

"These storms on an usually quiet Uranus have astronomers scratching their heads, De Pater said. The three other gassy giant planets — Jupiter, Saturn and Neptune — all seem to have strong internal heat sources, and that energy could help stir up storms in the atmosphere. But Uranus doesn’t appear to have one — which means that the Sun must be mostly responsible for generating such disturbances in the planet’s atmosphere, astronomers had thought."

"But seven years after the equinox, there is not enough sun to explain these massive storms, De Pater pointed out. So it means that the inner workings of Uranus, which remain hidden from view, are more complex than scientists expected."


Giant storms on gassy Uranus have astronomers scratching their heads 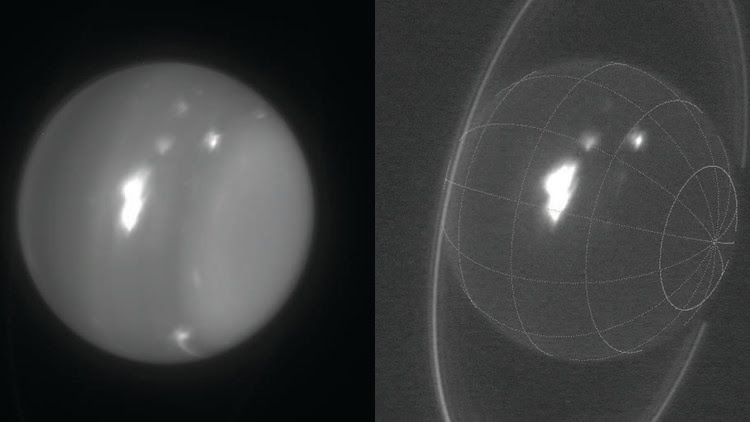 Infrared images taken with the Keck telescope at 1.6- and 2.2-micron wavelengths show storm systems on Uranus. The white spot is an extremely large storm that was brighter than any feature ever recorded on the planet in the 2.2-micron band. The cloud rotating into view at the lower-right limb

It never rains but it storms on Uranus. Astronomers have spotted a slew of squalls on this usually quiet, distant planet — two of them giant storms that took professional and amateur astronomers by surprise.

The findings, presented this week at the American Astronomical Society’s Division of Planetary Sciences meeting in Tucson, show that the mysterious, blandly blue planet might be far more complicated than scientists had thought.

Team lead Imke de Pater, a planetary astronomer at UC Berkeley, said she and colleagues first spotted the strange activity in August while using the Keck Observatory in Hawaii to study weather patterns on Uranus — which they had been doing regularly for more than a decade.

To their surprise, they saw eight large storms, including the brightest tempest ever seen on the planet at 2.2 microns — the wavelength of light that picks up clouds hanging just below the tropopause (the boundary between the troposphere and the stratosphere).[and the tropopause is much colder than the base of the troposphere]

“It was just by chance I was observing and noticed these incredible storms that we really had never seen before,” De Pater said in an interview. “You always have to be looking, I guess, to see things like that — so this was one of those lucky times.”

The squalls were highly unusual, De Pater said. The scientists might have expected this kind of activity in 2007 — that’s when Uranus had its equinox (a once-in-42-years event) and the sun would have been shining directly over the equator.

But for such storms to brew up some seven years later?

“People had predicted that the maximum in cloud activity would be around 2007 … and indeed we did see cloud activity,” De Pater said. “But it was nothing compared to what we saw in August.”

The scientists wanted to study this strange phenomenon further, but they didn’t have a lot of telescope time. So they alerted the amateur astronomy community to the storms to see if its members could help.

Amateur astronomers picked up another bright feature, but this one was visible only at a wavelength of 1.6 microns — which meant that this storm was brewing deeper in the atmosphere. The scientists also later used the Hubble Space Telescope to find storm systems at a variety of depths and across a distance of 5,760 miles.

These storms on an usually quiet Uranus have astronomers scratching their heads, De Pater said. The three other gassy giant planets — Jupiter, Saturn and Neptune — all seem to have strong internal heat sources, and that energy could help stir up storms in the atmosphere. But Uranus doesn’t appear to have one — which means that the Sun must be mostly responsible for generating such disturbances in the planet’s atmosphere, astronomers had thought.

But seven years after the equinox, there is not enough sun to explain these massive storms, De Pater pointed out. So it means that the inner workings of Uranus, which remain hidden from view, are more complex than scientists expected.

Known for calm weather, the seventh planet from the sun is suddenly sporting a series of storms.

A distant, icy, green giant—the planet Uranus—appears to have unexpectedly awakened from a long slumber. Astronomers have discovered a yet unexplained rash of extreme storms on the normally placid planet.

Peering through the world's most powerful telescopes, the Keck Observatory in Hawaii and the Hubble Space Telescope, a team of researchers based out of the University of California, Berkeley have spotted unusually bright cloud activity in the upper atmosphere of the seventh planet from the sun, which lies about 1.86 billion miles (3 billion kilometers) away.

Over a span of just two days in early August this year, the team spotted eight storms in the planet's northern hemisphere. One of the storms is now considered the brightest ever seen there, accounting for 30 percent of all the reflected light we can see coming off Uranus. (Related: "Auroras Seen on Uranus for First Time.")

Hubble looked at the planet just this past October 24 and found multiple giant storms extending more than 5,592 miles (9,000 kilometers) across, at various altitudes. That is roughly three-quarters of the diameter of Earth.

All these alien tempests appear to be happening above the main methane-laden part of the atmosphere, where the atmospheric pressures are about half of what they are here on Earth.

But one thing is for sure, this busy weather on Uranus has caught scientists completely off-guard.

This sky chart places Uranus in the constellation Pisces.

Forecasters predicted a peak in the planet's atmospheric activity during the 2007 Uranian equinox, when the sun shone straight down on its equator. The equinox is an event that happens once every 42 years, twice in the course of the planet's 84-year orbit around the sun.

Astronomers have been watching the weather on Uranus for more than a decade, charting swirling storms near its north pole. Since there is no internal heat source for these storms on the planet, these cloud activities were thought to be driven solely by sunlight.

For that reason, with the northern hemisphere turned away from the sun in recent years, the heating effect was expected to wane. But it hasn't.
Even the amateur astronomy community has sprung into action to document the surprising storms, turning their backyard telescopes on the green giant. Despite using much smaller instruments than their professional counterparts, amateurs were able to observe a different bright spot deeper in the atmosphere of Uranus.

"There definitely is a lot of dynamic activity in Uranus's atmosphere, and we have no idea why," said astronomer and team leader Imke de Pater, of the University of California, Berkeley, at a press conference at a meeting of the American Astronomical Society's Division for Planetary Sciences in Tucson, Arizona, this week.

"Predictions said they should fade away but they didn't, and we hope theorists will now take this mystery on and help explain what exactly is going on."

A simulated binocular view shows the position of the tiny green disk of Uranus in relation to the star Delta Pisces, faint to the naked eye.

Backyard sky-watchers can see the giant green world for themselves on any clear night this month.

Uranus is four times as wide as Earth, but since it lies about 1.86 billion miles (3 billion kilometers) away from our planet, it's barely visible to the naked eye at magnitude 5.7-and only in very dark, pristine skies.

However, the planet makes for an easy target with binoculars and small scopes. Look for Uranus lying within the field of faint stars that make up the constellation Pisces, which is now rising above the eastern sky after local nightfall this week.

The faint blue-green disk will appear only 3 degrees to the lower right of the faint naked-eye star Delta Pisces, which shines at 3.5 magnitude. Their apparent separation will be equal to six full moons, making them both fit easily within the field of view of a standard pair of binoculars.