WSJ Op-Ed: The media hail IPCC reports as definitive; Skepticism may be in order

Warming Up for Another Climate-Change Report

Every six years, a U.N. panel issues its findings, and the media hail them as definitive. Skepticism may be in order.

WSJ.COM 9/24/13: At a closed-door meeting in Stockholm this week, each paragraph of a document written by scientists is being projected onto large screens. Delegations from scores of nations participate in the editing: Words will be substituted, emphasis will be added, entire sentences may well be inserted or deleted.
After four days of haggling, the media will be summoned by the United Nation's Intergovernmental Panel on Climate Change to a news conference on Friday where the final version of the document—known as the "Summary for Policymakers"—will be released along with a solemn announcement that "science" has spoken. 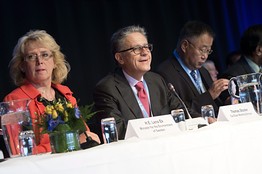 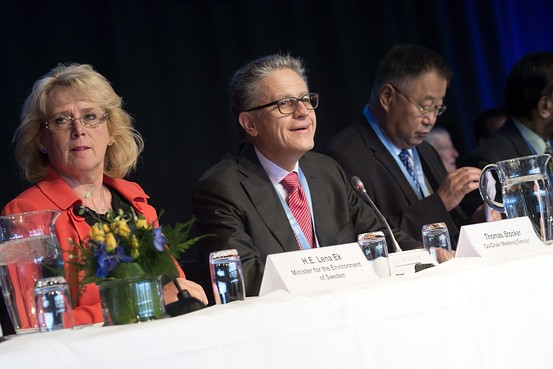 EPA
Members of the IPCC group speak during the meeting in Stockholm on Monday.
Every six years the IPCC publishes a mammoth report purporting to summarize and evaluate the latest climate-change research. The "Summary for Policymakers," probably about 30 pages long, will be widely read and commented upon by politicians, bureaucrats and the media. Other parts of the full IPCC report, which are much longer and whose contributors include hundreds of volunteer scientists and others, will be published in the weeks and months to come.
The IPCC's 2007 climate findings were rather vague. In the opinion of the 60 individuals who wrote the chapter, "Understanding and Attributing Climate Change," "most" of the rise in global average temperature since the mid-20th century was "very likely" caused by human-generated greenhouse-gas emissions. Recent leaks suggest that the 2013 report will twirl the knob a little further: The world will apparently be advised that the (entirely subjective) certainty level among IPCC experts that their above opinion is correct has risen to 95% from 90%. Whether the IPCC will acknowledge and address the recent, 15-year pause in global temperatures remains to be seen.
When the IPCC issues a report, it assures the world that the organization bases its conclusions on reputable, peer-reviewed scientific literature, and that its members are comprised of the world's top experts and best scientists. Yet when IPCC personnel answered a 2010 questionnaire sponsored by the InterAcademy Council (a network of national science academies), there were repeated complaints about unqualified individual members. For example, one individual (the responses to the questionnaire were anonymized) said there are "far too many politically correct appointments" involving people with "insufficient scientific competence to do anything useful."
Rajendra Pachauri, the IPCC's chairman since 2002, has repeatedly said that the IPCC bases its conclusions solely on peer-reviewed source material. Yet many of the sources cited by the 3,000-page 2007 IPCC report were press releases, news clippings, discussion papers and unpublished master's and doctoral-degree theses. The IPCC's highly embarrassing, since-retracted claim that the Himalayan glaciers could disappear by 2035 came from a 2005 World Wildlife Fund publication.
The U.N. has charged the IPCC with weighing the evidence on climate change in an objective manner. The problem is that numerous IPCC personnel have ties to environmental groups, many of which raise funds by hyping the alleged dangers of climate change. This relationship raises a legitimate question about their objectivity.
The examples are legion. Donald Wuebbles, one of the two leaders of the introductory first chapter of the Working Group 1 report (a draft of which may be released next Monday)—has been writing awareness-raising climate change reports for the activist Union of Concerned Scientists for a decade. Another chapter of the full IPCC report, "Open Oceans," is led by Australian marine biologist Ove Hoegh-Guldberg, who has written a string of reports with titles such as "Pacific in Peril" for Greenpeace and the World Wildlife Fund (WWF). Astrophysicist Michael Oppenheimer, in charge of another chapter of the IPCC report, "Emergent Risks and Key Vulnerabilities," advises the Environmental Defense Fund (after having spent more than two decades on its payroll).
University of Maryland scientist Richard Moss is a former fulltime WWF vice president, while Jennifer Morgan used to be the WWF's chief climate change spokesperson. Both are currently IPCC review editors—a position that's supposed to ensure that feedback from IPCC external reviewers is addressed in an even-handed manner.
My own examination of the 2007 IPCC report found that two-thirds of its 44 chapters included at least one individual with ties to the WWF. Some were former or current employees, others were members of a WWF advisory panel whose purpose is to heighten the public's sense of urgency around climate change.
In a sense, the IPCC conducts the equivalent of a trial. The organization is supposed to be policy-neutral: Its job is to decide whether or not human-generated carbon-dioxide emissions are dangerous to the climate. Rajendra Pachauri is the chief judge.
Mr. Pachauri writes forewords for Greenpeace publications and recently accepted an International Advertising Association "green crusader" award. He is an aggressive advocate for emissions reduction and carbon taxes.
In late 2011, Mr. Pachauri told the Guardian newspaper that an independent review of the IPCC "found our work solid and robust." This is not so. The review, conducted in 2010 by a committee of the InterAcademy Council identified "significant shortcomings in each major step of [the] IPCC's assessment process." It said "significant improvements" were necessary—and criticized the IPCC for claiming to have "high confidence in some statements for which there is little evidence."
Journalists routinely make the IPCC sound impressive. A 2010 editorial in Nature called it "the gold standard for independent scientific assessment." The following year, a British news article described the IPCC as nonpartisan, objective, and scientifically-based. The evidence does not bear this out.
Ms. Laframboise is a Canadian journalist who writes on climate matters at NoFrakkingConsensus.com.
Posted by MS at 5:01 PM