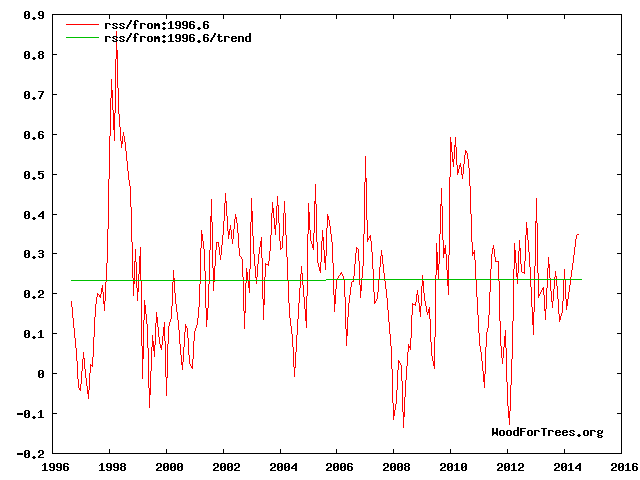 Thanks to a quote-rich Andrew Revkin/New York Times article today, the updated list of excuses for the 18 year "pause" or "hiatus" of global warming has taken a quantum leap up to #52:

An updated list of at least 29 32 36 38 39 41 52 excuses for the 18 year 'pause' in global warming, including recent scientific papers, media quotes, blogs, and related debunkings:

12) It's "not so unusual" and "no more than natural variability"

24) The wrong type of El Ninos

31) "Experts simply do not know, and bad luck is one reason"

37) As soon as the sun, the weather and volcanoes – all natural factors – allow, the world will start warming again. Who knew?

38) Trenberth's "missing heat" is hiding in the Atlantic, not Pacific as Trenberth claimed [debunked] [Dr. Curry's take] [Author: “Every week there’s a new explanation of the hiatus”]

41) The "recent hiatus in global warming is mainly caused by internal variability of the climate" because "anthropogenic aerosol emissions from Europe and North America towards China and India between 1996 and 2010 has surprisingly warmed rather than cooled the global climate."
[Before this new paper, anthropogenic aerosols were thought to cool the climate or to have minimal effects on climate, but as of now, they "surprisingly warm" the climate]

42) 'Missing heat' is not "supported by the data itself" in the "real ocean":
"it is not clear to me, actually, that an accelerated warming of some...layer of the ocean ... is robustly supported by the data itself. Until we clear up whether there has been some kind of accelerated warming at depth in the real ocean, I think these results serve as interesting hypotheses about why the rate of surface warming has slowed-down, but we still lack a definitive answer on this topic."[Josh Willis]

43) "After some intense work by of the community, there is general agreement that the main driver [of climate the "pause"]  is ocean variability. That's actually quite impressive progress." [Andrew Dessler]

44) "This [the 'pause'] is not an existential threat to the mainstream theory of climate." [Andrew Dessler]

45) "In a few years, as we get to understand this [the 'pause'] more, skeptics will move on (just like they dropped arguments about the hockey stick and about the surface station record) to their next reason not to believe climate science." [Andrew Dessler]

46) " I think the findings that the heat is going into the Atlantic and Southern Ocean’s is probably pretty robust. However, I will defer to people like Josh Willis who know the data better than I do." [Andrew Dessler]. Debunked by Josh Willis, who Dessler says "knows the data better than I do," says in the very same NYT article that "it is not clear to me, actually, that an accelerated warming of some...layer of the ocean ... is robustly supported by the data itself" - Josh Willis

48) "the argument that the hiatus will last for another decade or two is very weak and I would not put much faith in that. If the cycle has a period of 60-70 years, that means we have one or two cycles of observations. And I don’t think you can much about a cycle with just 1-2 cycles: e.g., what the actual period of the variability is, how regular it is, etc. You really need dozens of cycles to determine what the actual underlying variability looks like. In fact, I don’t think we even know if it IS a cycle." [Andrew Dessler]

49) "this brings up what to me is the real question: how much of the hiatus is pure internal variability and how much is a forced response (from loading the atmosphere with carbon). This paper seems to implicitly take the position that it’s purely internal variability, which I’m not sure is true and might lead to a very different interpretation of the data and estimate of the future." [Andrew Dessler]

50) It's the Atlantic, not Pacific, and "the hiatus in the warming...should not be dismissed as a statistical fluke" [John Michael Wallace]

51) The other papers with excuses for the "pause" are not "science done right":
" If the science is done right, the calculated uncertainty takes account of this background variation. But none of these papers, Tung, or Trenberth, does that. Overlain on top of this natural behavior is the small, and often shaky, observing systems, both atmosphere and ocean where the shifting places and times and technologies must also produce a change even if none actually occurred. The “hiatus” is likely real, but so what? The fuss is mainly about normal behavior of the climate system." [Carl Wunsch]

52) "The central problem of climate science is to ask what you do and say when your data are, by almost any standard, inadequate? If I spend three years analyzing my data, and the only defensible inference is that “the data are inadequate to answer the question,” how do you publish? How do you get your grant renewed? A common answer is to distort the calculation of the uncertainty, or ignore it all together, and proclaim an exciting story that the New York Times will pick up...How many such stories have been withdrawn years later when enough adequate data became available?" [Carl Wunsch]

52) My University screwed up the press release & didn't let me stop them from claiming my paper shows the "hiatus will last another decade or two." [Dessler] ‘Warming Interrruptus’ – Causes for The Pause