Using the Pacific Marine Atlas program to plot data from the ARGO global network of 3222 free drifting ocean floats with GPS (data first became available from this program in 2004-see float locations here) shows a downtrend in Sea Height over the past six years (January 31, 2004 - December 31, 2009) using data from the entire network: 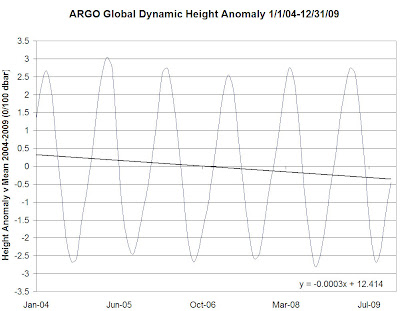 UPDATE: The Pacific Marine Atlas program does not plot the units used and the website also doesn't appear to specify the units used. However, based upon the following graph of ARGO data from the ARGO website: 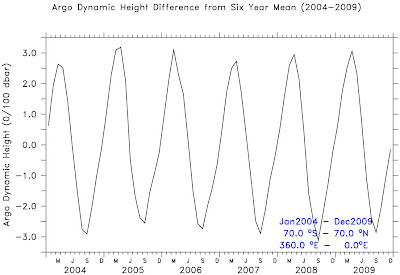 Also note that the monthly data sets begin on January 31, 2004 and the January 31, 2010 dataset will not be available until approximately February 15, 2010. Therefore, the trend line for the past 6 years is skewed somewhat negatively due to the lack of the entire 6 years data (given the seasonal variation in height). When the full 6 years of data becomes available, the plot and trend line will be posted on this blog, along with the trend in sea height per decade.