i.e. way before the industrial age and escalation of man-made "greenhouse gases," due to recovery from the little ice age. 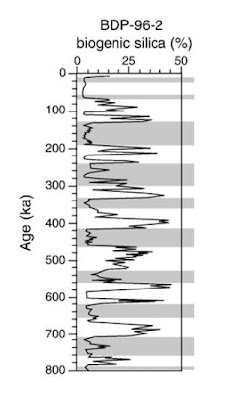 800,000 years of Siberian temperature history. Left is colder temperatures, right is warmer. Note the recent warming spike near the top of the graph (beginning 250 years ago) and ice ages shaded gray.
Siberia's Lake Baikal is the world's deepest lake.  By water volume, its also the largest freshwater lake, containing more water than all five of the Great Lakes combined.  Fed by over 300 rivers, Baikal is a barometer for the entire Siberian region.Due to the lake's depth (over a mile deep in many places), it contains the northern hemisphere's most pristine, uninterrupted sedimentary record, allowing highly accurate reconstructions of past temperatures.  Baikal's great distance from the moderating effects of any ocean also makes it an ideal site for detecting global warming.


Researcher Anson Mackay, of the Environmental Change Research Centre, University College, London, has done just that -- reconstructed the climate history of Lake Baikal over the past 800,000 years.  The result is the most accurate high-resolution temperature record of Siberia ever constructed.  And it contains several surprises.

The record clearly demonstrates the region has often been considerably warmer than it is at present.  More stunning is the most recent data, which shows Siberia first began warming around 250 years ago -- long before the industrial revolution, and its resultant greenhouse gas emissions.

Mackay concludes, "[Changes] started as early as c. 1750 AD, with a shift from taxa that bloom during autumn overturn to assemblages that exhibit net growth in spring (after ice break-up) ...Warming in the Lake Baikal region commenced before rapid increases in greenhouse gases, and at least initially, is therefore a response to other forcing factors such as insolation changes."

Siberia is, of course, not the entire world.  However, the global warming signal is, even today, strongest there.  Also, Mackay's paper is not the only research to demonstrate the current warming trend predates the industrial era -- for instance, Bräuning's research in Turkey, Hallert in Canada, or Vollweiler, et al, in Austria/Germany.