Headline: “NASA Research Finds Last Decade was Warmest on Record.”
Well, not so in several Australian rural temperature records. “Looking back to 1880, when modern scientific instrumentation became available to monitor temperatures precisely,” (per NASA press release) the current decade in Australia is 0.6-0.7 deg C cooler than it was in 1881-1890. This estimate is derived from the annual Mean Maximum Temperatures provided by the Bureau of Meteorology for the following meteorological stations: #61055, 46043, 55023, 58012, 64008, 69018, 75031, 83025, 84016, 85096, 90015. These rural stations have temperature records dating back to at least 1881. Long-standing urban stations based at airports or in major cities such as #38003, 61055, 66062, 80015, 86071, and 94029 are not included due to local “urban heat island” effects at these hot spots, which would have artificially inflated estimates by an average 1 degree C this century. Graphs below obtained from the Australian Meteorology Bureau site. 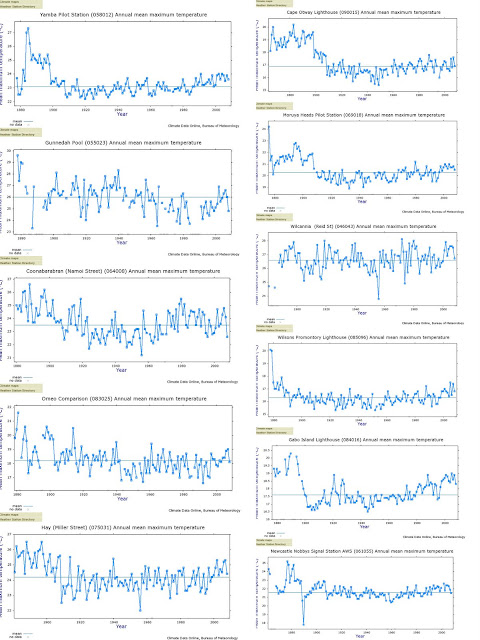 h/t Graham Dick
And see Climategate email  1221683947.txt:
"Another example is Australia. NASA only presents 3 stations covering the period 1897-1992. What kind of data is the IPCC Australia diagram based on? If any trend it is a slight cooling. However, if a shorter period (1949-2005) is used, the temperature has increased substantially."
Posted by MS at 10:53 PM