Add it to The List: Evil trace gas CO2 is affecting artistic expression

Add it to The List: the 0.65C in global warming recovery from the Little Ice Age has been found to affect artistic expression in a study of classical music: 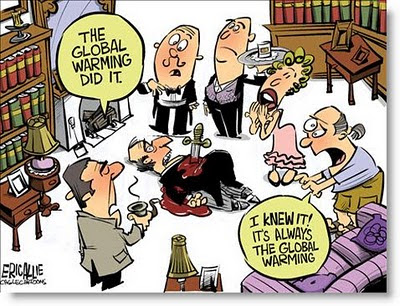 ScienceDaily (Sep. 26, 2011) — Scientists at the Universities of Oxford and Reading have catalogued and analysed depictions of weather in classical music from the 17th Century [during the Little Ice Age] to the present day to help understand how climate affects how people think.

Dr Karen Aplin, of Oxford University's Department of Physics, and Dr Paul Williams, from Reading University's Meteorology Department, both combine careers as atmospheric scientists with a love of classical music. Dr Aplin was inspired by the regular portrayal of weather-related phenomena in orchestral music she has played, she said: 'as all music lovers know, the hint of a distant storm from a drum roll can be just as evocative as the skies depicted by Constable and Monet.'

The researchers were so convinced that classical music is influenced by climate that they pursued this pilot study in their own spare time, outside of their normal scientific work. A report of their study is published on 23 September in the journal Weather.

Dr Williams said: 'We found that composers are generally influenced by their own environment in the type of weather they choose to represent. As befits the national stereotype, British composers seem disproportionately keen to depict the UK's variable weather patterns and stormy coastline.'

The research showed British composers easily lead the way with musical weather, followed by the French and the Germans.

Generally, the most popular type of weather represented in music is the storm, presumably because of the use of storms by composers as an allegory for emotional turbulence, such as in Benjamin Britten's Four Sea Interludes from the opera Peter Grimes.

Wind was found to be the second most popular type of weather to feature in music. Wind can have a variety of characters, from a gentle breeze rustling the trees, as in the beginning of the third movement of Berlioz's Symphonie Fantastique, to a full-blown Antarctic gale, as in Sinfonia Antarctica by Vaughan Williams.

The research also charts the development of musical instruments as aids to evoke a particular sound, for example a thunder sheet or wind machine, and the effect weather had on composers.

Strauss needed both sunshine and the Alpine landscape to inspire him. Several other composers, such as Berlioz, Schubert and Wagner, were also dependent on fair weather conditions, associated with high pressure, for their best output. Wagner, for example, referred to 'bad-weather unemployment' and wrote: 'This is awful weather. My work has been put aside for two days, and the brain is stubbornly declining its services.'

The study provides a baseline of cultural responses to weather before climate change. It seems inevitable that our changing climate will influence artistic expression: will UK composers writing music for a 2050 Proms programme still be interested in representing our warmer, wetter weather? The team believe their research will provide a basis for comparison.

'Meteorological phenomena in Western classical orchestral music', by Karen Aplin and Paul Williams, is published in the journal Weather on 23 September 2011.
Posted by MS at 10:17 PM